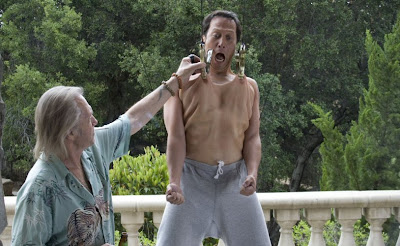 A prison-bound Rob Schneider trains his nipples under the merciless tutelage of David Carradine.

In keeping with a string of events that are proving to me that 2010 is gonna be a great year, I encountered the humble Rob Schneider movie BIG STAN at the Times Square/42nd Street subway station's music and video store where it was available for $3.99 and decided to take a chance. It featured my man David Carradine in a comedy and I figured $3.99 wasn't much to risk, so what the hell, right? I'm not a huge Rob Schneider fan — although he does seem like an alright and down to earth guy in interviews — and as this was his first foray into directing I was somewhat skeptical, but I'm glad to say that BIG STAN is an unexpected gem that greatly appealed to me for a number of reasons, chief among which was that from out of nowhere Schneider has created the first genuinely funny American-made martial arts comedy. (Admittedly not a large genre, but what existed previously was uniformly awful.)

Stan Minton (Rob Schneider) is a rich real estate con man who bilks old ladies out of their savings, but he gets busted and is given a mandatory sentence of three-to-five years in prison for fraud. His crooked lawyer (M. Emmett Walsh) manages to get Stan six months in which to put his affairs in order before being sent up the river, and Stan, realizing that he'd most likely be raped from sunrise to sunset on a daily basis during his incarceration, uses that time to do illegal steroids and attempt to learn karate in an effort to toughen himself up (his karate instructor is played by Simon Rhee, aka Dae Han from BEST OF THE BEST). Sadly, Stan's first month of effort amount to naught, that is until he meets The Master (David Carradine), an unkempt chainsmoking senior citizen drifter who possesses martial skills that verge on the superhuman. Using the five remaining months, Stan trains hard with his newfound mentor and, as is par for the course in cinema, becomes the baddest motherfucker you've ever seen by the time he reports for lockup, armed with an arsenal of formidable hand-to-hand and stick-fighting techniques. After easily and brutally beating the living shit out of a yard full of the prison's hardest and largest inmates on his first day by way of intimidation factor and establishing his badass cred, Stan immediately finds himself the prison's Alpha wolf, a position he defends a number of times, and once established as the top dog, Stan institutes a strict policy of no rape under penalty of rapists being answerable to him. (He even takes the time to explain to his fellow inmates that consensual homosexual sex is okay, but rape is an act of violence, very strongly underlining the difference between the two.) That development leads to unforeseen changes in the daily lives of the inmates, and the barriers between the many prisoner factions come tumbling down with the aid of communication and Afro-Cuban dance. But while Stan's transformation of the prison system makes for an interesting narrative in many ways, the film need more of a villain than the ever-looming spectre of man-rape, so the prison's corrupt warden (Scott Wilson) enlists Stan's criminal real estate knowledge for his plan to have the prison demolished and converted into a series of luxury condos, from which he'll turn a hefty profit. Promised early release for his expert participation in the scheme, Stan proves invaluable and receives many perks, but when push comes to shove, is he really willing to betray the inmates whose lives he's unexpectedly turned around? And is he also willing to ditch his newfound general human decency that has made him a better man who's finally open to being the caring, unselfish husband his sweet wife (Jennifer Morrison) needs? And what's all this about Stan being The Master's number two student, second only to a highly proficient pupil who uses his great skills for evil?

BIG STAN is vulgar, somewhat lowbrow, and very definitely an example of "guy" humor, but its good vibes are undeniable and it's quite funny. But what really sets this film apart is it's blistering comedic martial arts sequences, something I did not know I was going to get when I bought it on a whim. The fight choreography is excellent — what else would one expect from Dan Inosanto, the film's "martial arts master instructor" and co-founder of Jeet Kune Do with some guy named Bruce Lee? — and works like what you night get if the Three Stooges had turned their slapstick sensibilities to seriously kicking ass chopsocky-style. JKD trapping is quite evident, and the terrific stick fighting fairly drips with Inosanto's way of working, but all that hardcore asskickery is played for laughs and I have not laughed so hard at a martial arts comedy since the original DRUNKEN MASTER (1978) with Jackie Chan. (NOTE: BIG STAN is in no way as good as the classic DRUNKEN MASTER, so don't even go there, but it is a lot of fun.) Among the highlights are: 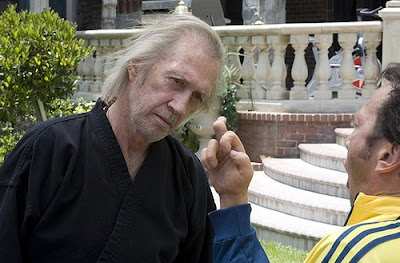 The Master teaches Stan the "one finger of death" (because there wasn't enough time for all five).

A boozing, chainsmoking, borderline sadist, The Master looks like his offensive presence would kill your lawn if he moved in next door, and he's a refreshing antithesis to all the pious and wise martial mentors who populate martial arts stories. When asked by Stan's perky wife where he comes from, The Master stone-facedly replies, "From Hell." 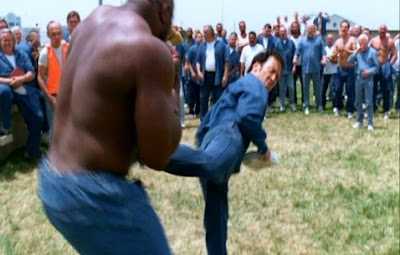 The ghosts of Larry, Moe and Curly look down from on high at this one and smile broadly. In fact, all of the fights are worth your time for that exact reason, particularly an incident in the showers involving a stabbing thwarted by homemade soap-on-a-rope nunchucks.So, armed as it is with wall-to-wall fights, rampaging vulgarity, David Carradine, a staunch anti-rape stance and a tale of redemption and meaningful contribution to society brought about by the martial arts (okay, brought about through intimidation and the kicking of truckloads of deserving ass), BIG STAN is a solid bit of fun that was unfairly released straight to DVD while vastly lesser efforts such as DEUCE BIGELOW: EUROPEAN GIGOLO somehow made it to the big screen. I guess that's what Schneider gets for thinking outside the box and bringing something different and actually good to an audience that makes outright shit like DISASTER MOVIE a hit, but thanks to BIG STAN I'll be paying attention to whatever he comes up with from now on.
Posted by Bunche (pop culture ronin) at Saturday, January 09, 2010

Loved this movie. The "finger of death" training scene with Carradine had me laughing so hard, I couldn't breathe. My gf still laughs to this day recalling how I must have rewound that scene a dozen times on dvd and my gasping, doubled-over reaction each time.

Carradine was so unexpectedly good (what took him so long to get cast in comedy? It was a match made in heaven), that this movie alone made me miss him at his untimely (and bizarre) death.