REASONS 2010 COULD BE PRETTY BITCHIN' #1: THE RETURN OF LUCY LAWLESS TO THE PEPLUM GENRE 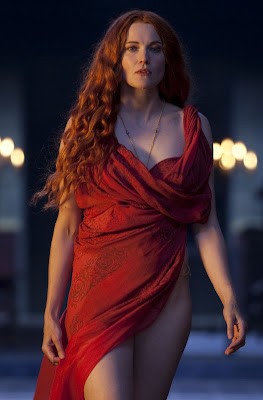 Lucy Lawless as seen in the upcoming SPARTACUS: BLOOD AND SAND.

Not only is Lucy "Xena" Lawless returning to the tried and true sword and sandal genre — aka "peplum," after the short skirts worn by the oiled-up he-men who populated those tits & togas epics — she doing nudity! All together now, fanboys and lesbians:

But it must also be noted that while the rest her is apparently gloriously undraped, Lucy will not be flashing any Kiwi bush and will instead be kitted-out with a merkin that matches her character's red hair. Contrary to feeling cheated, I instead find it hilarious that the need was seen to disguise actual nudity with a crotch wig that simulates presumably era-accurate pubic grooming (i.e. none), so in effect she's nekkid anyway. Lawless was always funny when not "in character," and this is just a pisser!
Posted by Bunche (pop culture ronin) at Sunday, January 03, 2010

I, for one, love my merkin and wear it every day!

We all love John's merkin--and looking up phrases like peplum films. Thanks, Steve Bunche.