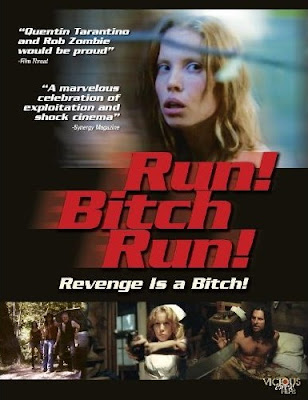 Allow me to cut straight to the chase: if you're looking for an ultra-sleazy rape-revenge movie where a particularly nasty rapist deservedly gets a three-foot machete stuffed straight up his ass, this film is a must-see!

The rape-revenge movie is in no way a feel-good genre and is responsible for many of the nastiest moments in film over the past four decades, including such "you will need a shower after sitting through this one" classics as LAST HOUSE ON THE LEFT (1972), I SPIT ON YOUR GRAVE (1979), MOTHER'S DAY (1980), MS. .45 (1981), and SAVAGE STREETS (1984), each plumbing the narrative depths of one of the worst things that can happen to a human being, dragging the viewer along for the horror in question, and finally allowing a catharsis of vengeance that does not necessarily grant the story's protagonist anything resembling peace of mind. These films are definitely an acquired taste and are understandably reviled by most women, but those women who do champion the genre are a tough breed and it is to them that I recommend RUN! BITCH RUN! without reservation.

With RUN! BITCH RUN! director/co-screenwriter Joseph Guzman has crafted a welcome throwback to the sleazy grindhouse thrills of yore, and the movie wears its influence like a badge of honor. One of the things that made grindhouse movies from back in the days so much fun was that they knew their audience very much enjoyed being shocked by all manner of sleazery, preferably spiced with copious amounts of nudity, graphic violence, gore, and creative use of profanity, all of which Guzman remembered and shaped into a sometimes knowingly tongue-in-cheek entry into the genre (well, about as tongue-in-cheek as a rape-revenge movie can get, anyway). The movie is a classic cautionary tale (AND HOW!!!) involving two Catholic schoolgirls (pay attention, fellow parochial school uniform fans) who travel from town to town selling bibles to benefit their school. Ultra-pious and virginal Catherine (Cheryl Lyone) does not approve of partner Rebecca's (Christina DeRosa) healthy teenage sexuality (and very kind lack of anything resembling modesty in front of the camera) but puts up with it because Rebecca's basically a nice girl, but when the pair enter a remote backwater town and pick the exceedingly wrong house at which to attempt to peddle their wares, their fates are sealed. 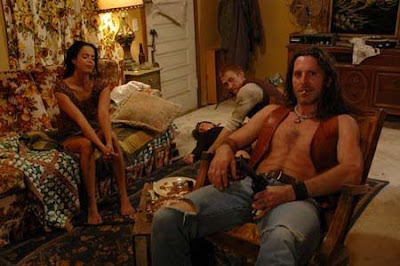 The poor girls unknowingly walk into the squalid home of Lobo (Peter Tahoe), a creepy drug dealer/pimp, and his pals Clint (Johnny Wincher) and Marla (Ivet Corea), the former being the wimpy and stuttering Omega to Lobo's Alpha wolf, while the latter is easily the most balls-out hostile and psycho dyke crackhead to come down the pike in quite some time. Once in the hands of this pack of human filth it's only a matter of time until something really, really bad happens, and while veterans of this genre may think they've seen some pretty vile and sadistic treatment handed out to unfortunate innocents in any of this film's antecedents, this flick tops several of those flicks by virtue of its motivation-optional psychos. All three of the creeps are in serious need of immediate death applied with extreme prejudice, but Marla reeeeeally takes the cake, and you know she's gotta be horrific if she's worse than her two male companions...

Highlights include:
The film ends on a singularly downbeat note when Catherine drives away and ponders what she's just done, realizing that she's essentially sunken to the level of her tormentors (Hey! They had it coming, ferfucksake!), eventually pulling her station wagon over and committing pump-action suicide. THE END.

Like I said, a feel-good genre this ain't. But while RUN! BITCH RUN! ends up a total downer, it comes from out of nowhere to represent as one of the better entries in its grubby little niche. Definitely not a date movie and certainly not recommended for those unmoved by the frisson (Ooh! High-falutin' film-fuck word!) of seeing a hideously wronged individual hand out hard-earned retribution, this one is best ventured into by hardened grindhouse veterans, exploitation-fan feminists, and those who simply want to see that magic moment when anus meets a good length of very sharp steel. It's the perfect second bill for a double-feature with Disney's THE COUNTRY BEARS! (More on that one tomorrow. No, I'm not kidding.)
Posted by Bunche (pop culture ronin) at Wednesday, January 06, 2010

Oh...I thought that WAS the plot of The Country Bears....