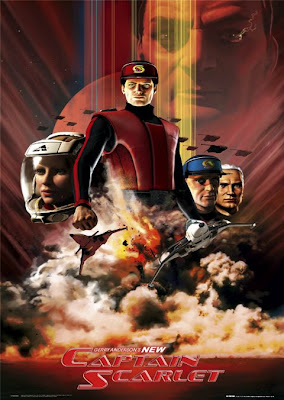 CAPTAIN SCARLET AND THE MYSTERONS (1967) was British kiddie TV mastermind Gerry Anderson's followup to his classic THUNDERBIRDS (1965), and the two programs could not have been more different in approach and content if they tried. CAPTAIN SCARLET was very much a product of the Cold War and depicted an inter-planetary war of nerves between the Earth and the Mysterons of Mars, an emotionless disembodied presence that launches the conflict after a first contact encounter that goes disastrously wrong (an Earth expedition mistakes a Mysteron probe for an act of aggression and destroys one of their cities, thus pissing off the technologically superior aliens). Featuring marionettes that departed from the large-headed and somewhat cartoony-looking designs of all previous Anderson shows, CAPTAIN SCARLET AND THE MYSTERONS was bleak, paranoia-laden and serious as a heart attack, in other words not at all what was expected from a kid's show of its era (or even now, come to think of it), and as a result it has gone on to earn a well-deserved place in the pantheon of cult science-fiction TV.

GERRY ANDERSON'S NEW CAPTAIN SCARLET kicked off in 2005, ditching the puppets in favor of CGI, and the results have been quite commendable. Rather than continuing from where the original series left off, the new run chose to start from the ground up and retell the start of the Earth/Mysteron conflict, a launching point that also provides the origins of the titular protagonist and his arch enemy, Captain Black. Both are agents of Spectrum, kind of a "homeworld security" organization in the year 2068, and both were manning the mission that went wrong when a panicky Captain Black fired missiles upon a Mysteron city. Hauling ass away from the site of devastation, the Earthmen found out about the Mysterons' bizarre powers the hard way when they were killed and resurrected as flawless clones under Mysteron control and dispatched back to Earth, there to serve as havoc-wreaking agents of destruction bent on wiping out the entire human race. Captain Scarlet eventually shakes of the Mysterons' control and rejoins Spectrum with a major advantage: his cloned body can now regenerate from even the most grievous of injuries and damage, making him pretty much indestructible. 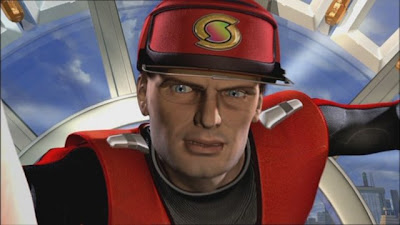 Pumped full of lead and he still ain't dead: the indestructible Captain Scarlet.

Captain Black, on the other hand, stays evil and is the catalyst for several of the show's plots, constantly acting as a remorseless and deadly thorn in Spectrum's side. From that setup, the new CAPTAIN SCARLET ramps up the energy episode-by-episode, dropping its heroes into fast-paced international and interplanetary adventure and intrigue on a grand scale. The limitations of doing this show live-action and with marionettes are left in the dust and in no time the viewer gets used to the CGI figures, accepting that even the CGI humanoids rendered in a high-budget flick like AVATAR have not yet worked out all the kinks of completely convincing movement and facial expressions, and the show's scripts and voice acting more than make up for any deficiencies in the animation.

With the exception of some tweaks in national origin and gender, the characters are much the same as they were in the 1967 version (the most notable change being Lieutenant Green's reimagining as a woman), and the classic design of the series' vehicles and spacecraft have been given a forty-years-on update that works seamlessly, especially the new look for the utterly kickass Spectrum Pursuit Vehicles (or SPVs, if you prefer). The all-female Angel Squadron are back as well, and their leader, Destiny, is given a hell of a lot more to do this time around and more or less renders the heroic pairing of Captain Scarlet and Captain Blue into a trio you can really root for. I've dug the Angels since I was in the single digits, and I say their fighter planes are a million times cooler than an X-Wing any day (I prefer the original Sixties version, but the new ones convey a real sense of badass power the original lacked; the originals were sleek, surgical implements with which their pilots precisely removed removed enemy bogies from the air). 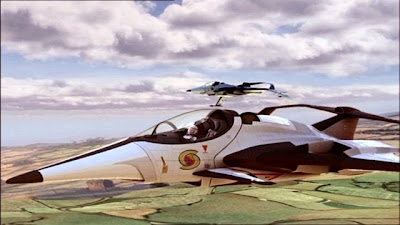 As yet unavailable in the U.S. on DVD or in broadcast (I snagged the first series on a "gray area" DVD at a 2007 Big Apple Con), the new CAPTAIN SCARLET is well worth checking out if you stumble across it and is a textbook example of just how to bring a classic series into the 2000's. I'm guessing that the rebooted DOCTOR WHO gets waaaay more attention because it's Britain's answer to STAR TREK in terms of pop cultural significance, but GERRY ANDERSON'S NEW CAPTAIN SCARLET is a far better series across the board, with not a bad episode in the bunch, something I cannot say about DOCTOR WHO (despite how much I've enjoyed many of its installments).
Posted by Bunche (pop culture ronin) at Friday, January 22, 2010

Wait - how did I not know about this?!? I used to love that show! I wanted to be an Angel when I grew up. And never did floating Polo-mints look so scary.
Right, I'm off to find this new version. Thanks a bunch, Bunche!! ;-)

(Is it just me, or does the CGI Captain Scarlet's face look a lot like John Barrowman, aka Captain Jack Harkness?)

Call of the Wendigo said...

I loved the new Captain Scarlet shows, even if I felt his voice was never quite right. It's just a shame it didn't get better scheduling by the TV companies.