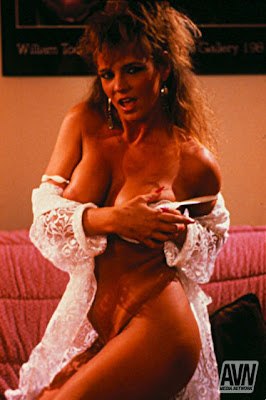 Erica Boyer, a mainstay in American porn, was killed in a car crash on New Year's Eve, mere days after her fifty-third birthday. The star of such flesh-epics as WHITE BUN BUSTERS and HANNAH DOES HER SISTERS (both 1986), BACKSIDE TO THE FUTURE 1 (1988), WONDER REARS (1991), and the excellently-titled READ MY LIPS: NO MORE BUSH (1993), Boyer had a reputation for being a real sweetheart of a human being about whom few in the industry had a bad word to say, and she was justly renowned for her torrid girl/girl work (though supposedly bisexual, many feel Boyer was more likely a straight-up lesbian). A detailed obit for her can be found at AVN.
Posted by Bunche (pop culture ronin) at Tuesday, January 19, 2010

Damn. Backside to the Future. The one where she went back in time and did herself as a teenager -- and of course her dad, as played by the inimitable Paul Thomas.