My man Sammo Hung, king of the fatassed badasses.
Even though it stars my man Sammo Hung, with a title like ENTER THE FAT DRAGON I expected this 1978 ass-whuppin' comedy to be just another of the lame Bruce Lee cash-ins that spewed forth from the Szechaun-pepper-ravaged anus of the Hong Kong film industry in the wake of Lee Siu Lung's untimely death. Those films were the worst kind of exploitative cinematic necrophilia imaginable, uncaringly besmirching Bruce's good name in every way short of actually digging up his fetid corpse and fucking it in the ass on camera, so I wasn't exactly open to witnessing another one and consequently avoided ENTER THE FAT DRAGON for the better part of the past twenty-some-odd years whenever it crossed my path. But be that as it may, I finally figured that if I could willingly have endured THEY CALL ME BRUCE? (1982), a film that was about as funny as a burning children's cancer ward, then I could at least give Sammo Hung's Bruce riff a chance. Hoo-boy, am I glad I finally did, because ENTER THE FAT DRAGON came from out of nowhere to totally kick my ass and take its rightful place as my all-time favorite Sammo Hung movie. Yes, good things really do come to those who wait (or, in my case, avoid).

Contrary to what some sources would have you believe, ENTER THE FAT DRAGON is not a parody of ENTER THE DRAGON (1973), but is instead a respectful tribute to Bruce Lee's overall cinematic persona and a lampoon of his movies in general. Sammo stars as Ah Lung, an affable country bumpkin pig farmer who idolizes Bruce Lee.

Ah Lung fantasizes about being as awesome as his hero.
Ah Lung leaves his rural home and sets off to Hong Kong for a job in his uncle's dinky back alley restaurant, and once he arrives the plot becomes totally superfluous as what passes for a story reveals itself as nothing more than a feature-length excuse for fight scene after fight scene. You get the requisite gang of local toughs who refuse to pay at the restaurant, a twisted crime boss with a trio of international martial arts masters at his command, and an arrogant star of Bruce Lee cash-in/ripoff movies who thinks he's the shit, so there are plenty of asses in sore need of a good kicking and Ah Lung is just the guy to do it.

The film's comedy is as broad as one would expect from a Hong Kong flick of its era, but the refreshing thing about it is that while martial arts comedies often feature a goofy protagonist of dubious merit who becomes a kung fu expert in time to defeat the film's Big Bad, ENTER THE FAT DRAGON gives us a goofy protagonist who's not only a badass from the get-go, but a major-league serious motherfucking badass like nobody's business. I've seen many Sammo Hung movies and have always delighted in watching him decimate his opponents with grace skill and power that utterly belies his girth, but the shattering asskickings he hands out in this film are spectacular and cover hand-to-hand and weapons techniques with a deceptive ease. Ah Lung may be a goofball, but once he's in combat mode you'd better get out of his way unless you actually want to experience a year or two of intensive physical rehab.

Ah Lung, armed with sticks and about to beat the ever-loving shit out of a pack of assailants.

No joke, the boy is the baddest motherfucker on two legs, and it must be humiliating for the film's numerous in-shape antagonists to be so thoroughly brutalized by a guy who looks like his diet is composed entirely of sacks of White Castle double-cheeseburgers and Chicken Rings.

Like I said, there really isn't any plot to speak of, so the gags that hold the film together between outbursts of bone-crushing violence at times feel like random skits from some sub-MAD TV sketch show and offer little to recommend them. Perhaps the funniest thing in the film is an element that would have likely gotten the filmmakers killed if they'd included it in a film made nowadays, and that's the ludicrous sight of classic-era kung fu flick actor Lee Hoi San (HEROES OF THE EAST, THE 36TH CHAMBER OF SHAOLIN and many, many others) in a huge mutton-chopped Afro wig and blackface, presumably as a parody of Jim Kelly from ENTER THE DRAGON.

"Whatchoo lookin' at?": the venerable Lee Hoi San in a ridiculous example of kung fu minstrelsy.

The core of the film's comedy, however, is Sammo Hung's Bruce Lee-worshipping Ah Lung and his dead-on accurate impersonation of the late legend's mannerisms, gestures, battle squawks and familiar facial grimaces. Though the only physical resemblance Hung bears to Bruce Lee is a common ethnicity, Hung's Lee riffs are funny as hell to those who get the gag and should definitely be checked out.

So I heartily recommend ENTER THE FAT DRAGON for those who enjoy quality fight scenes and could not care less about having a plot get in the way of the ass-whuppin.' While no DRUNKEN MASTER (also from 1978), this one's good for a laugh and will get you pumped up enough to make you want to go out and beat up Asian guys in blackface. 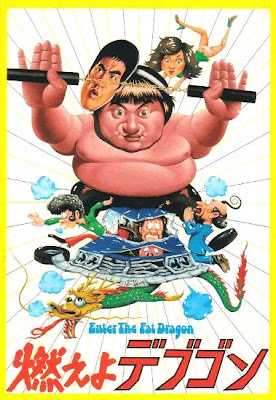 While my question is not kung fun related, it is cult related: Afrodisiac is coming out soon! How will you be celebrating?

Poster for the film was Hong Kong by way of Japan, maybe? It reads something like "Get Fired Up, Dragon!" in Japanese.