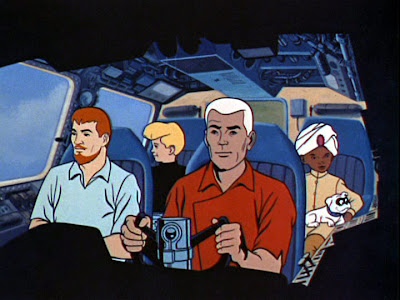 My buddy G-Man got me the complete original run of the classic Hanna-Barbera cartoon JONNY QUEST (1964-1965) for Christmas, and since receiving it I have been devouring the episodes at a rate of around seven per night. A favorite since childhood, I totally dug the show's unique blend of James Bondian adventure, semi-believable sci-fi and international travel to exotic locales, coupled with gobs of Cold War-era political incorrectness and considerable violence, and when watching it again for the first time in almost fifteen years I would say that it holds up extremely well.

Beginning life as a primetime series — believe me when I say that JONNY QUEST's primetime origins are readily apparent — JONNY QUEST was a comparatively lavish and ambitious series that followed the globe-hopping adventures of the title character, and eleven-year-old boy whose father, Dr. Benton Quest was one of the three top scientists in the world. Johnny's dad was one of those all-purpose scientists common to sci-fi/adventure stories of the era and his knowledge in a wide variety of fields was often put to use by the U.S. government, necessitating a 24/7 bodyguard tutor for Jonny in case enemies of the state sought to kidnap or assassinate the lad. That job fell to Roger "Race" Bannon, an operative of Intelligence One who was the show's all-around professional badass, companion to Dr. Quest and big brother/surrogate father figure for Jonny (while well-intentioned, Dr. Quest was constantly doing experiments vital to national security, so Jonny ended up spending a lot of time with Race). A turbanned Indian kid named Hadji served as the team's resident "exotic" and Jonny's adoptive brother, and while admittedly something of a mild stereotype, Hadji was cool as fuck and often provided solutions to a given adventure's problems that the westerners would never have arrived at (his Calcutta-earned street smarts, skills at magic and ability to communicate with assorted animals were definitely a huge asset). Rounding out the cast of characters was Bandit, a cute bulldog puppy who was inserted into the mix as unnecessary comic relief (very much against the wishes of series creator Doug Wildey) and ended up endearing himself to viewers despite his look and overall character tone at times seeming like he came in from an entirely different cartoon show. Each week the cast would pile into their super-cool needle-nosed jet plane and take off to some random part of the world where they would take on ex-Nazis, communists, "yellow peril" masterminds, cannibalistic headhunters, saboteurs and spies, trained killer Pteranodons, garden variety megalomaniacs, re-animated mummies (which went rather against the show's somewhat-plausible science-fictional flights of fancy) and a very memorable invisible energy monster, all of which was so entertaining that it still captivates the imagination nearly fifty years after it debuted (even if the actual animation is limited; it was all in the scripts and characters, baby!). 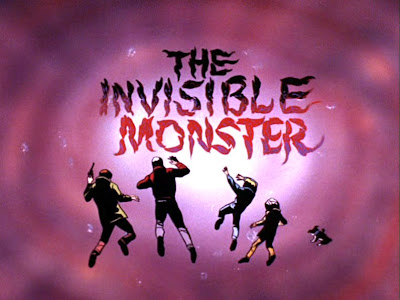 Title card to my choice as the series' best episode. No easy call since there are about five or six that instantly spring to mind as possible contenders!

But while the show may be a classic, it's quite clear that the people who put together what would have been the dream boxed set for many nostalgic cartoon fans of a certain age cared for little other than just getting the thing on shelves, thereby giving viewers versions of the episodes that feature dialogue edits in the name of political correctness/racial/cultural sensitivity, as well as slapping damned near every episode with the same ending credits, so there's no way to tell who actually wrote or performed the finished shows. Don't get me wrong; I'm very glad to have these shows on DVD, but why did they feel the need to screw over one of the undisputed landmarks in American TV animation? With that caveat in mind, the shows are still worth watching and exposing your chilluns to, so rent them via Netflix rather than spending money on expurgated versions.
Posted by Bunche (pop culture ronin) at Saturday, January 02, 2010

What's amazing about Jonny Quest is that if you watch the credits there were something like 4 animators that worked on that show. You never see that kind of craftsmanship these days.