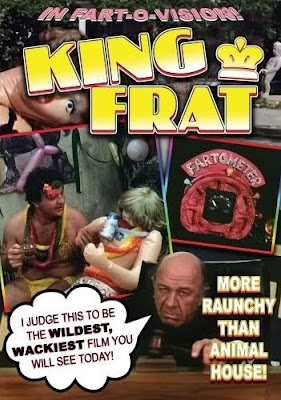 The deserved success of NATIONAL LAMPOON'S ANIMAL HOUSE (1978) inevitably spawned several imitators that had none of the original's quality in the department of overall cinematic craftsmanship, a trend that continues to this day, and most of that wretched breed chose to focus on ultra-lowbrow gross-out/"shock" humor, reasonless vulgarity and gratuitous nudity to put asses in seats. But none of the ANIMAL HOUSE clones was as flagrant in both its ripoff status or its chimp-with-a-camera filmmaking than 1979's KING FRAT, a film that brings to mind what ANIMAL HOUSE might have been like if it had been helmed by a ten-year-old. I was first introduced to the film during my own wild college days and watched it while out of my mind on any number of intoxicants that evening, so I remembered little of it except for it's horrendous theme song and have sought to see it again from a far more sober point of view. Unavailable in the U.S. on DVD until a recent release on a solo disc and in a double feature with the 1977 T&A festival CHEERING SECTION, KING FRAT is now once more unleashed upon an unsuspecting public and it has to be seen to be disbelieved.

KING FRAT has no linear plot to speak of (which makes it ideal for watching while completely fucked up) and is instead a series of "comedic" adventures starring a pack of seriously overage students at Yellowstream University. Lacking the wit to come up with characters as memorable as those found in the film it so mercilessly rips off, KING FRAT gives us a bland assortment of perpetually-drunk automatons (they can hardly be called characters) who carry out what the script dictates, and among them can be found a profane black dude, the requisite freshman pledge, the jock (who constantly wears a football helmet so we know he's a jock, as if the fact that he's named "Jock" wasn't enough of a hint), a couple of interchangeable ladies' men, a jaw-droppingly offensive "Injun" stereotype named "Chief" who's played by a white guy (and dressed like a crazed Vietnam veteran), and a painful John Belushi/Bluto knockoff by the name of J. J. "Gross-Out" Gumbrowski (John DiSanti). 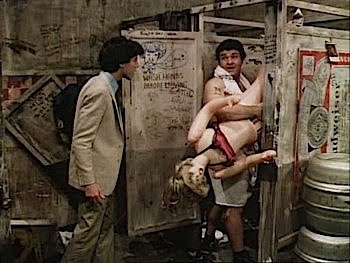 Unlike the beloved Deltas from ANIMAL HOUSE, you will not give a shit about what happens to any of these manikins or root for them in any way.

Since KING FRAT has no actual plot, here's a breakdown of things that go on in the movie, little of which is tied together by what is commonly known as story structure:
With all of that (and less) in mind, KING FRAT is very obviously a complete and utter disaster, but as such it's a fascinating mess. It's a textbook example of a cheap ripoff that so slavishly apes its source material but gets everything totally wrong, and it is for that reason that I highly recommend experiencing it for yourself. Much like with THE COUNTRY BEARS, I sat from start to finish of KING FRAT with my eyes bugging out of my head and my mouth hanging open in disbelief at its shameless ripoff-ness and lower-than-lowbrow content — seriously, how do you beat "drawing mud?" — and I was highly entertained by its worthlessness. It seemed like just when the film couldn't possibly stoop any lower, it would do just that and then top (bottom?) itself again. So I heartily recommend renting KING FRAT to run it for a room full of drunken reprobates who will no doubt enjoy jeering at its staggering incompetence. It's a true anti-classic. 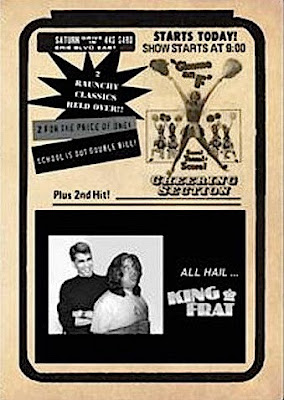 The packaging for the DVD pairing of KING FRAT and CHEERING SECTION: the image used for KING FRAT is not from the film.
Posted by Bunche (pop culture ronin) at Friday, January 15, 2010

Remember that Mad Magazine movie? That was bad. King Frat reminds me of it for some reason

You're thinking of UP THE ACADEMY, which Bill Gaines had Mad's name taken off of... Awful movie.

And, shock of total shocks, Netflix actually has KING FRAT... I just moved it to the top of my queue.

In the late seventies I was young film director doing commercials in Miami, Fort Lauderdale area. A low end film crew came to town, hired most every available actor in South Florida and that's how "King Frat" was made. I heard nothing but stories about the fools behind the camera -- how I came across your blog is beyond me. But when I saw King Frat, and was lured in.

Should have been at the premiere in Miami with the cast and crew. Talk about a "high priced spread." They're people in Haiti eating better than we did that night.

Having just seen KF for the first time... It makes me wonder if those who made the film actually saw ANIMAL HOUSE or read about it third-hand in a foreign-language newspaper. They had no clue what made the original funny.

Anyone who does not see the value in this movie lacks a sense of humor. Its pure gold.

yeah, I'm sorry, but King Frat is one of the best late 70's romps ever made...it's incredibly fun and goofy and the theme song is one of the best romp opening themes ever (right up there with Hamburger: The Motion Picture) I'm with William, whoever doesn't see the value of King Frat severely lacks a sense of humor...feel free to give a listen to my recent episode about it http://drunkonvhs.com/drunk-vhs-king-frat/