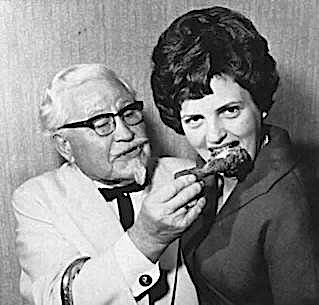 Among the things that will be falling by the wayside during my efforts to get it all together in 2010 is my too-frequent consumption of the gods' own gift to Negroes everywhere, namely the ambrosia that is fried chicken. Jesus H. Christ, do I love me some fried chicken and despite my lifetime of defying stereotypes related to us highly rhythmic individuals, I wear my love of this artery-clogging delicacy like a badge of honor.

Long an affordable staple on the American family's menu, fried chicken can be easily prepared at home — easy after mastering the intricacies and arcane secrets of its preparation, that is — but it is most often enjoyed when picked up from one of our fair nation's many fast food chains that specialize in such crunchy-yet-tender mouth-watering deliciousness. (You can also get decent fried chicken at Chinese takeout places because, let's face it, the only people who do fried stuff better than black people are our Asian brothers.) So with that in mind, allow me to take a brief walk through the premiere chicken franchises and reminisce about their various merits (or lack thereof). 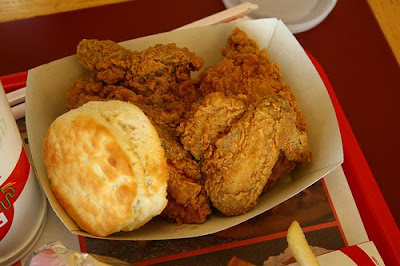 This roast beef sandwich-based chain is slowly dying out and that's a shame because their roast beef sandwiches were pretty good (and a damned sight better than that shit they sell you at Arby's). The same cannot be said of their chicken, which was passable back in the late-1980's, but has steadily dwindled in quality ever since. You know you're in trouble when the best part of the chicken is the frequently shell-like coating and not the meat, and Roy's chicken was often served overcooked and bearing a wood-like consistency. You might get lucky and receive a decent order if you find a Roy's in some podunk locale, but otherwise this bird is best avoided altogether. 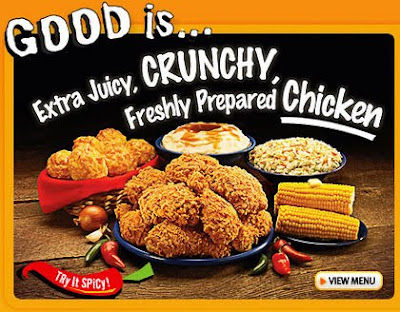 For years there was an urban legend circulating among the black and Latino communities that Church's Chicken was actually owned by the KKK or some other white supremacist organization, and that the insidious forces of evil whiteness had infused the chain's artery-clogging wares with a chemical that either prevented dusky erections or outright sterilized the blacks and Hispanics who ate the stuff (seriously, Google that one for yourself). That's all obviously bullshit, but the fact of the matter is that Church's Chicken simply isn't very good, or at least the sole Church's that I've experienced is particularly uninspired. The one fairly close to where I live in Brooklyn is a combination Church's and White Castle and it tends to attract the dregs of the area's populace — junkies, alkies, lowlife hoods and hustlers, strung-out whores, bootleg DVD salesmen, assorted redolent beggars — so maybe the overall mediocre-to-awful quality of the food reflects the staff's apathy toward serving anything truly worth eating to an assortment of mutants. Whatever the case may actually be, the chicken served here has nothing to its flavor that sets it apart from the frozen TV dinner equivalent and it almost seems to wear its blandness as a badge of honor. In the specific case of the Church's shop near me, its flavor-mediocrity is perfectly compounded by being available from the same dual menu that allows you to order it with some White Castle sliders, a combination guaranteed to make you fart and shit like a goddamned banshee. If that sounds unpleasant, let me tell you with absolute certainty that it's actually far worse than it sounds and can result in gaseous emissions that make plants wilt, pets flee, and children cry. My relatives from Alabama used to rave about Church's Chicken and considering a number of their highly questionable interests, that was all I really needed to know. 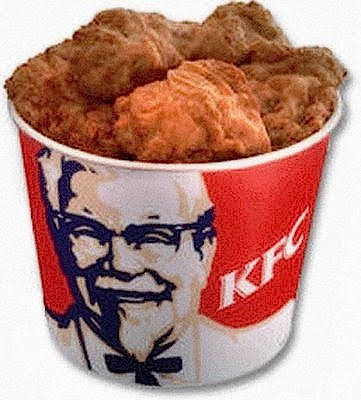 The acme of fast food fried chicken for decades, I doubt there's a single non-vegetarian household in this country that has never experienced the time-honored meal of a bucket of Kentucky Fried Chicken. Now known as "KFC" in what's probably a feeble attempt at diverting the modern health-conscious consumer's attention away from the chicken's fried aspect being prominently featured in its name, the Colonel's signature bird can be a tender and flavorful joy that deserves its franchise longevity. But the decline in KFC's quality is easily tracked from the late-1970's, beginning with the introduction of the "extra-crispy" version of chicken that eschews the unique seasoning of the original recipe in favor of a largely flavorless, battered and deep-fried overcooked edible paperweight with admittedly tasty breading. Then came the day when someone realized that wings were the perfect snack, and immediately the piece of the bird that everyone got pissed off about getting too many of in a bucket became popular and more pricey than they were worth. And as the years passed, many KFC's merged with other fast food joints in the Reise corporate stable, allowing the standards of KFC and whatever chain they were paired with to drop because proper attention could not be paid to both fast food favorites; a particularly troubling example of such a pairing is when KFC is linked with Taco Bell (which I fucking love when it's done right) and neither junk food delicacy is prepared and served with the care that made them great. Then there are the KFC's in urban areas that are manned by stereotypically lazy and hostile layabouts who get annoyed with you if you expect them to get your order right or serve you chicken that's fresh, rather than the sorry specimens that have been slowly desiccating under heat lamps for hours on end. In big cities KFC tends to attract a certain thuggish and uncouth element, sometimes resulting in your order being served to you from behind two layers of three-inch-thick bulletproof plexiglass (I am not exaggerating), thus reducing the once-pleasant dining experience to something akin to being doled out a meal in a maximum security prison. Sometimes you get lucky and receive an order of KFC that's a winner across the board, but in my experience I've been disappointed by what I've gotten from the once-reliable Colonel and his minions around eight out of ten times I go to them for chicken. I've officially given up on any KFC in the New York City or Connecticut areas and will only patronize one of their locations in small towns and out of the way places where standards are a tad more stringent. 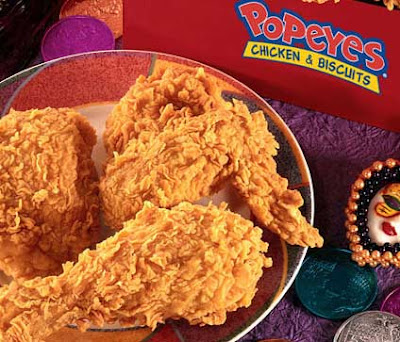 Contrary to popular belief, this negro-pleasing franchise was not named for the spinach-chomping cartoon sailor, but was actually named in tribute to Popeye Doyle of THE FRENCH CONNECTION fame. No, seriously! This Louisiana-accented chain features what is hands down the best fried chicken available for fast food consumption, and if it's done right it is a genuine pleasure in all aspects. Available in mild or spicy varieties, Popeye's chicken has an exceptional crispy coating and skin, tender meat, and an aroma that's certain to stimulate your salivary glands. Their biscuits are simply the best of the many available with your garden variety fast food chicken order and the same can be said of their sides, of which I wholeheartedly steer you toward the mashed potatoes and Cajun gravy. Simply superb, Popeye's Chicken is the only fast food chicken to which I will remain loyal, although limiting my intake of it to one order per month (okay, maybe two). However, even something as awesome as Popeye's is not without its downside (apart from the obvious potential death from congestive heart failure, that is). With the exception of a location on the highway that leads to New Paltz, NY, all the Popeye's I've visited have been in some urban area and staffed by surly and/or brain-dead high school students or recent parolees who do not give a fuck about you, your order, or even if what they're serving you is fresh or not. Popeye's is also notorious for running out of chicken before or during the dinner hours, which certainly speaks of its popularity, but it's fucking annoying and frustrating to get there before 7PM and be told that they're out of whatever you may want and that they have no intention of making anything fresh, despite the fact that the place is open for another three whole hours. That's completely disgraceful because frying chicken at home takes about ten minutes at most, and not only is Popeye's a joint whose sole raison d'etre is to make fried chicken by the truckload, the place has industrial fryers to facilitate exactly that goal, so what the fuck? And depending on which one you go to, Popeye's can also be afflicted with the same dregs of the neighborhood as previously described at Church's Chicken and there's nothing worse than being stuck on the sometimes very long lines behind those assholes. They'll attempt to haggle over the price of a single biscuit and get loud/potentially violent if the clerk's answers are not to their liking, so have your pepper spray or Taser at the ready. But even those caveats cannot detract from the excellence of Popeye's if you get it fresh and hot from the fryers.

I don't do the birds, but Popeye's fish is some seriously addictive shit!

The Popeye's in my neighborhood (in Manhattan)is always well maintained and the people working there are very professional. Plus they often have these sales which just make me eat even more.

would the Popeye's you're talking about be the one on Third Avenue in the Twenties? If so, I heartily second your assessment of it.

Seen posted on the marquee sign outside a Church's Chicken back when I was living in Northern Virginia:

I was formerly a lifelong KFC addict, but their quality has fallen so far, I haven't eaten there in a year. The only Popeye's in my neck of the woods disappointed (the chicken was dry and not especially flavorful).

I still get love to get my fried chicken on, but at non-chain restaurants.

Down here in Florida, the best fried chicken chain among the 4 you mentioned is Church's.

KFC in my experience here is the worst.

Man I love me some Popeye's. Sadly, in the state where I now live and have for some eight years, there is only one in the entire state. And it is at a rest stop. And they serve the stuff cafeteria style.

Still beats KFC, though, even with those flaws.

I feel a road trip coming to test out the new SUV's highway mileage...

"Do you pick your feet in Poughkeepsie?"

I never sampled Roy Rogers or Church's chicken and based on this I probably will not entertain the thought going forward. Over the years I have been more of a fan of the chicken patty sandwiches that some of these places make. Used to love the Burger King one, but preferred any Wendy's or KFC provision to it. McDonald's McChicken was never something to write home about so this makes me wonder if we can ever count on a Bunche comparison of the single item across the span of food chains?