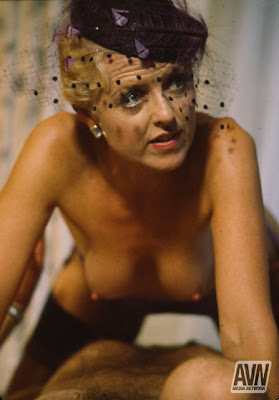 Juliet "Aunt Peg" Anderson at work.
Juliet Anderson, nee Juliet Carr but best known to porn fans as Aunt Peg, was found dead in her home, apparently of natural causes (although she had been suffering from Crohn's disease). Embarking on her pornographic film career at age 39, Anderson was the original "cougar"-type and fans of her mature charms were legion. There's an excellent obit for her over at AVN, so I recommend reading that (read it at home because the site is absolutely not work safe), but allow me to say that I admired her for being one of the most sex-positive human beings out there. Rest well, Miss Anderson, you silver fox, you.
Posted by Bunche (pop culture ronin) at Tuesday, January 12, 2010

Labels: PORNO-ROCITOR, THE BOOK OF THE POP CULTURE DEAD

She was a force of nature with a tremendous zeal and lust for life which she communicated amply through her medium.
I just found out today and I miss her very much...
All Love to You Juliet ~