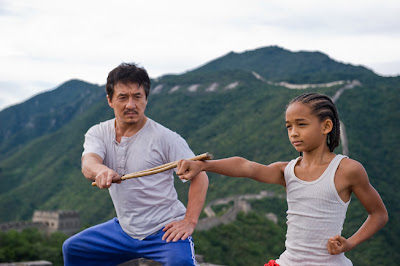 The 1984 KARATE KID has become one of the indelible favorites of those who were there when it came out and of those who discovered it later via cable or VHS, which only makes sense due it being a "rah rah" feelgood tale of an underdog who becomes a winner thanks to his relationship with an aged martial artist mentor. Feeling very much like ROCKY — which also made sense because both films shared a director — , THE KARATE KID was a good flick for its time and deserves its fondly-remembered status, largely for the touching and inspirational chemistry between stars Ralph Macchio and Pat Morita, but, to me, it has dated badly and now feels like just another of the legion of classic '80's movies that I really don't need to see again. Since the original there have been two straight-up sequels and one failed attempt at a series reboot starring Hilary Swank (the less said of those, the better), but by then it was clear that the tit had run dry.

As has been clearly illustrated over the past decade or so, the American moviegoing audience loooooves the familiar, hence the deluge of sequels, "re-imaginings," reboots and remakes, so perhaps it was inevitable that THE KARATE KID would be up for such re-consideration. The kids of the '80's have had their beloved G.I. JOE, TRANSFORMERS, A TEAM and, soon,THUNDERCATS kickstarted for the big screen to varying degrees of success, so why not THE KARATE KID?

Re-tooled as a starring vehicle for young Jaden Smith (the spawn of Will Smith and Jada Pinkett), this new version keeps the basics of the original but ups the ante considerably in various aspects. Twelve-year-old Dre (Smith) moves to China when his mother gets a new job (exactly what her job is remains unexplained) and finds himself dropped head first into an alien culture where he does not speak the language and sticks out like a sore thumb (his race is not explicitly presented as an issue in the script, but the implication is there). On top of being miserable over being ripped from his familiar turf and friends in Detroit, Dre is soon targeted by a gaggle of young kung fu students, the baddest of whom, a kid named Cheng (Zhenwei Wang), does not like that Dre has an innocent crush on local girl Mei Ying (Wen Wen Han). After being on the receiving end of a savage beatdown from Cheng, Dre is spectacularly rescued by his building's maintenance man, Mr. Han (Jackie Chan, whose character is perhaps unintentionally named after the villain from ENTER THE DRAGON) and begins a regimen of martial training that will allow him to compete in an upcoming open kung fu tournament and theoretically win his enemies' respect. There are of course other minor complications, but you get the idea: this is the KARATE KID story transplanted to a different place and culture, and if you ask me it's all the better for it (despite the idiotic titling; there is no trace of Japanese arts in this film and find the titling choice both insulting and culturally offensive, but what can ya do?). 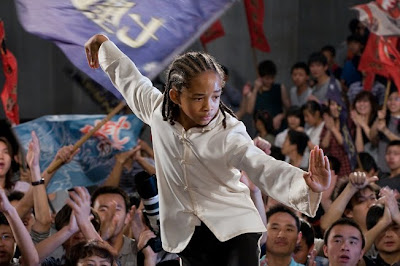 Jaden Smith: a surprise and a revelation as the remake's protagonist, leaving Ralph Macchio's Daniel LaRusso in the dust.

The original film's narrative was fun for what it was, but the remake ups the ante in several interesting ways. Dropping Dre into a totally different culture from his own is enough of an obstacle for the character, but, unlike RalphMacchio's Daniel LaRusso , Dre does not speak the language and is also obviously visually different from the natives of China, which, while not explicitly stated, is certainly implicit in his struggle against Cheng, his douchey buddies, and, by association, their complete balls-out fucking asshole of a sifu (who offends my own martial sensibilities waaaaaaaay worse than Martin Cove's admittedly assholish Cobra-Kai sensei in the original). Dre's awakening to his path of martial enlightenment is also superior to Daniel LaRusso's by virtue of him being in the land that is the very heart and sole of kung fu , with Han's taking him on a journey to a sacred mountain that blows the nuts off of any Jedi training we've seen in the STAR WARS films. As Dre makes his way up the mountain, he witnesses firsthand several individuals who have given themselves utterly to becoming one with the martial/spiritual way and it moves him to his young core. Of particular interest is an unbilled moment when Michelle Yeoh — she of YES, MADAM and CROUCHING TIGER, HIDDEN DRAGON fame — is glimpsed by Dre as she portrays an adept who, precariously perched upon one of the mountain monastery's outcroppings, executes some serious non-violent crane-style technique with a king cobra as a participant. If I saw that shit it would have totally re-arranged my thinking, and that's exactly what happens to Dre.

Jackie Chan as Han is a breath of fresh air after over three decades of may good but self-repeating performances, as this film allows him to play serious and dramatic. I won't spoil it, but next to his work in the two classic DRUNKEN MASTER films, this is my favorite of his roles.

But the most interesting of the remake's tweakings is the level of brutal violence committed upon Dre by his tormentors, a level of savagery made all the worse by how young its perpetrators are. It's the skilled yet animalistic evil to Dre's beatdowns by another prepubescent that is frankly disturbing, a sense of innocence corrupted, all because of a teacher who has the moral/spiritual grounding of a thinly-disguised sadist/sociopath.

I could go on and outline all of what I find fun and worthwhile about this remake, but I would prefer it if you got to experience it for yourself. Bad choice of title notwithstanding, this is my vote for the best film of the rather lackluster 2010 summer blockbuster season. TRUST YER BUNCHE and see it if it's still playing near you, or check it out on DVD and cable in the months to come.
Posted by Bunche (pop culture ronin) at Tuesday, August 10, 2010

wow, this totally changed my feelings for the movie. Not that I thought it was gonna be bad, I just ignored it completely. I guess I have to rent it now

Huh. Well, you have yet to steer me wrong on a movie I had decided to avoid, so I'll give it a try. Thanks!

I saw he film the weekend it opened. I did think it was a good remake of the original. But it killed me when Jackie Chan took the kid up the mountain and some how they went back in time 500 years!

Love the pic of Jaden mid-move... I can't wait to Netflix this!