SCOTT PILGRIM VS. THE WORLD 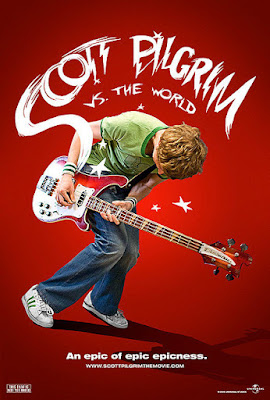 Okay. Let's start this off with me declaring up front that I do not think SCOTT PILGRIM VS. THE WORLD is a bad movie. Not by any means. The commitment that all involved with its creation put into it is fully evident on the screen and it moves at a pretty lively pace. The performances are mostly pretty solid, the special effects are both cool and interesting, the music's pretty good and the film has several outrageously-superhuman kung fu fights. Yet despite all of that I was disappointed and after a while kinda bored by it, and I think that's because I am in no way the audience this movie is aimed at.

SCOTT PILGRIM VS. THE WORLD is based on the six-volume graphic novel series by Brian Lee O'Malley (a series I did not read because I couldn't get past its pseudo-manga artwork) and tells the story of the titular Canadian slacker (played quite well by Michael Cera), a twenty-two-year-old garage band bassist who shares a minuscule flat with his cool gay roommate (Kieran Culkin, who steals every scene he's in). Scott is dating a sweet and rather immature high school girl named Knives Chau (Ellen Wong), a romantic state disapproved of by everyone he knows, but that relationship gets derailed when Scott encounters the mysterious Ramona Flowers (Mary Elizabeth Winstead) and falls head over heels for her. Though too much of a chickendick to do the right thing and break up with Knives, Scott feebly pursues Ramona, but the shit hits the fan when the pair start dating and Scott finds out that if he's going to be with Ramona he must first defeated her Seven Evil Exes, all of whom display the super-powers one finds in "fighter" video games. 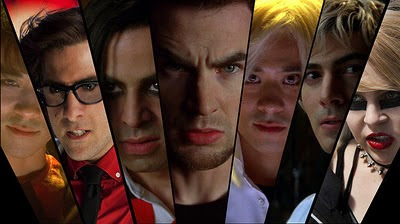 The Seven Evil Exes.
Each succeeding ex is more powerful and vicious than the one who came before, so Scott, who was shown to be quite adept at video game combat, is in for the battles of his life, all in the name of love.

Director Edgar Wright, he of SHAUN OF THE DEAD and HOT FUZZ renown, keeps things light and very animated, but I grew weary of the whole thing around halfway through for a number of reasons: 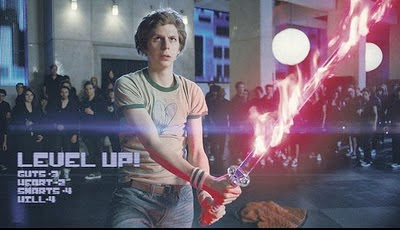 It's a cute gimmick but it lost its novelty to me very quickly and the set-to's mostly suffered from a sameness that grew very repetitive.As for the things I liked about the film: 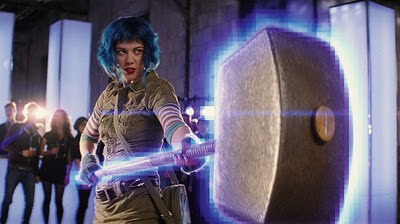 That fight is totally kickass and it may be the first time, even after literally hundreds of martial arts movies, where I've seen a woman wield a warhammer. 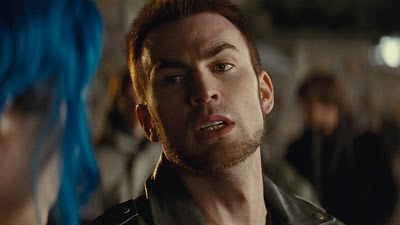 Behold the face of a true douchebag.
The worst of Hollywood pretty boy ego personified, Lucas was my second-favorite evil ex, second only to... 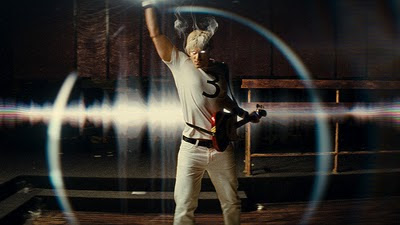 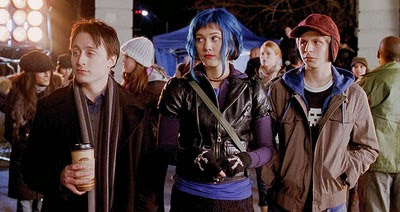 Wallace Wells (Kieran Culkin) is the dude with the coffee.

Wallace is the gossipy friend of Scott's bitchy sister and he's perhaps the most significant voice of reason in Scott's world. Not at all a gay stereotype, the character is just plain funny and I would have loved to see more of him.

So as you can see, there is much to recommend about SCOTT PILGRIM VS. THE WORLD, so by all means check it out if the aforementioned skewing toward a twenty/thirty-something video game-loving demographic appeals to you. But if you're like me and aren't into that kind of thing, I advise either giving it a miss altogether or waiting for cable.

ADDENDUM-8/16/10
So, it looks like this movie is a box office flop and the pundits are weighing in with explanations as to why. Go here for a good article on all of this.
Posted by Bunche (pop culture ronin) at Saturday, August 14, 2010

I have not seen this film yet (I went to see the Expandables instead last night), but I do plan on seeing it soon. So far, the movie performed poorly at the box office and well below it's expectations, very much like Oni Press's previous adaptation "White out". Maybe Oni Press's subject & stories just don't capture the main stream audience's attention.

But to be honest, I am kinda tired of films that celebrates geeks & losers. because we know in real life those types never amount to anything, so it's very hard to believe they can be the protagonist/hero and we're supposed to relate to and cheer for.

What I loved about Scott Pilgrim is that guys my age finally have a romance movie that they won't get made fun of for liking.