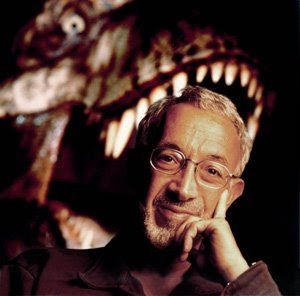 One of the all-time great special effects visionaries has left us, and I'm numb from the shock. Stan Winston's resume is festooned with classic work spanning a career of thirty-plus years, and any fan of quality genre effects work will recognize the films he's contributed his creative skills to, among which can be counted INVADERS FROM MARS (1986), ALIENS (1986), PREDATOR (1987), THE MONSTER SQUAD (1987), TERMINATOR 2: JUDGMENT DAY (1991), JURASSIC PARK (1993), GALAXY QUEST (1999), and this summer's best blockbuster, IRON MAN. And those are just some of his best-known pieces, so I think you get the idea of how totally awesome this guy was. Hell, the guy took home four Oscars, well-earned accolades for his totally believable work on T2, JURASSIC PARK, and the heavyweight of the lot, the incomparable ALIENS.

Winston died at home, surrounded by family, after a seven-year battle with multiple myeloma, so I bid you good rest, imagineer. You helped bring the impossible to vivid life, and I'll be forever grateful.
Posted by Bunche (pop culture ronin) at Monday, June 16, 2008

It's going to take a long time for this to sink in. Although I only spoke to the man a few times, Our studios have been across the street from each other for more than 10 years. There will never be another Stan. He developed a lot of the things business-wise that have come to be expected of a creature shop, and pioneered technology that nobody else would have the balls to attempt. Everybody loved ribbing his larger than life personality, but he was a lion of the effects world. He was as big as the creatures he made, and he will be sorely missed.

This is really sad. Stan Winston was a master of a trade that's all but dead these days. People soil themselves over CGI, but some of my favorite effects scenes have been created by Stan Winston. The guy built a to scale animatronic T-Rex!! I hope his legacy inspires a new generation, I miss him already.