This past weekend's Big Apple Con proved to be a goldmine for my autograph collection, so here's this con's haul: 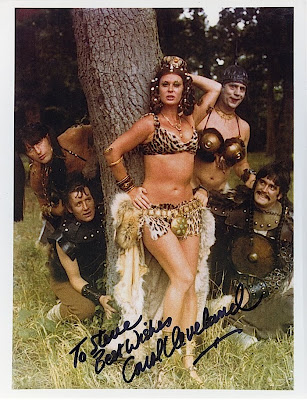 I'm a lifelong fan of MONTY PYTHON'S FLYING CIRCUS and the Python's subsequent films, so when I had the opportunity to meet the troupe's Carol Cleveland I jumped at the chance. Cleveland was the resident "hot girl" who provided a comely female face and figure when the gags warranted a woman not played by one of the guys in horrendous "pepperpot" drag (a role sometimes filled to a lesser degree by Connie Booth), and it's a good thing that Cleveland's considerable looks were supplemented by solid acting chops and a great ability to be as balls-out ("tits-out?") silly as her colleagues. This is a great shot of Cleveland as Mrs. Attila the Hun from "The Attila the Hun Show," basically a sketch about how a run of the mill domestic comedy would go if it centered around a violent conqueror. 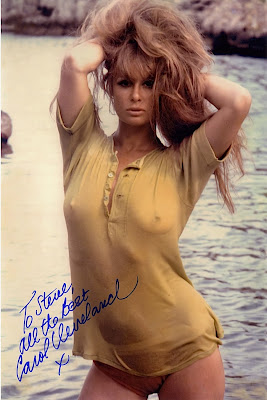 I don't normally go in for cheesecake shots of my favorite celebs, but can you blame me for snagging this one of Carol Cleveland during her prime? And what was it about British chicks of the 1970's? Damn, they were hot!!! (Two words: Jenny Agutter.) And Cleveland nowadays still has a bod that women half her age would kill for, plus she's a total sweetheart. 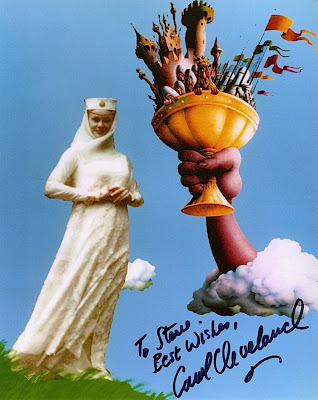 Here's a shot of Carol Cleveland in what is probably her most famous role, namely Zoot (and her identical twin sister, Dingo) from MONTY PYTHON AND THE HOLY GRAIL, the film I've probably seen more than any other and that I still consider the funniest movie ever made. 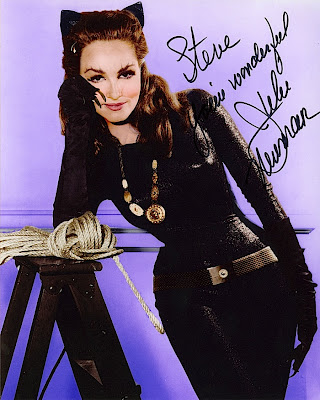 This shot is a classic. Julie Newmar, the first and best Catwoman from the sixties-era BATMAN series, was the first woman I can recall awakening the wee Bunche's interest in girls and unknowingly providing me with my very first "pup tent" condition, so I had to get her autograph. 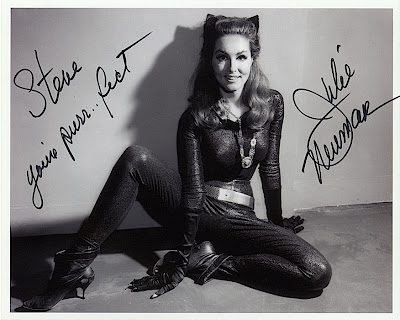 And how could I not also snag this one? A smiling, splay-legged Julie Newmar in her Catwoman getup? I think I'm going to faint... 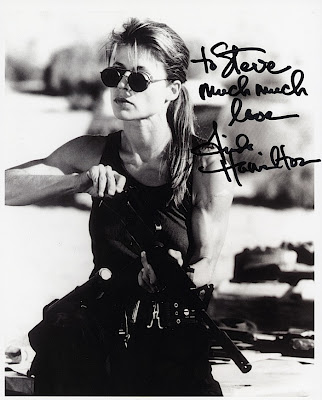 Linda Hamilton as Sarah Conner in TERMINATOR 2: JUDGMENT DAY was one of cinema's toughest heroines and completely rocked that movie, instantaneously becoming an icon of female empowerment and a hero to butch lesbians everywhere, so naturally she had to be included in my collection. When meeting her I politely addressed her as "Ms. Hamilton," to which she responded with, "None of that 'Ms.' stuff; I'm just plain Linda!" while smiling broadly. Needless to say, I liked her immediately. 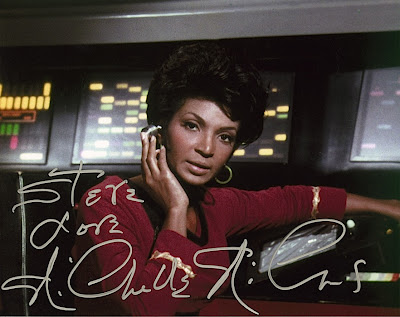 Nichelle Nichols, STAR TREK's Lieutenant Uhura, right there on par with Julie Newmar as my first crush as a wee Bunche. She was historically significant as one of the first — if not the very first — black women on TV who was neither a buffoon nor a domestic, and gave us dusky viewers at home hope for the future by proving that black people made it at least to the 23rd century. And with this autograph, I now have signed 8x10s of every living member of the original Enterprise bridge crew. Ah, sheer geek bliss... 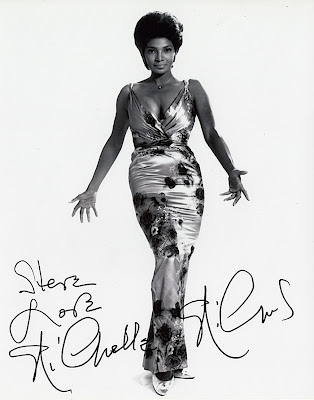 How about this shot of Nichelle Nichols from her pre-STAR TREK days, when she was a singer at the Blue Note? Yowza! 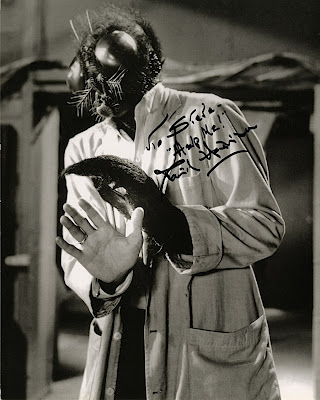 David Hedison, co-star of the TV version of VOYAGE TO THE BOTTOM OF THE SEA, was a favorite during my childhood, but he will always have a position of honor in my heart and memory as Andre Delambre, the ill-fated pioneer of teleportation technology in the original 1958 version of THE FLY, a film whose ending warped me for life. I keep promising to do the Fly costume for Halloween, lab coat and all, but now that I've got this prime piece of photo reference I really have no excuse. It's too late to do it properly this year, but next year, definitely! 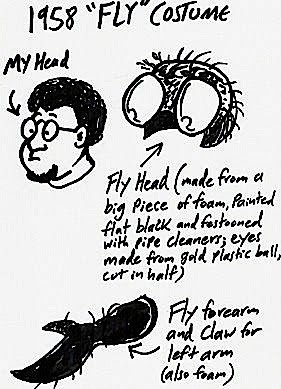 The notes for my long-promised Fly getup.
Posted by Bunche (pop culture ronin) at Wednesday, October 21, 2009

These are lovely photos, thanks!