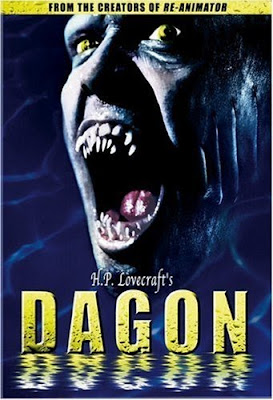 It's once again time for the annual gorging on horror flicks in anticipation of and setting the proper mood for Halloween, so in case you find yourself in need of a terrific horror film that you haven't yet seen, allow me to recommend DAGON without hesitation, a movie I first saw during my trip home for Thanksgiving back in 2002 or thereabouts (in a double feature with the equally excellent DOG SOLDIERS, but that's a totally different animal). It's rather low on gore and violence, but it has a creep-factor of about 9 out of a possible 10, and if you've ever read any H.P. Lovecraft, it perfectly captures his mood and tone while transplanting the events to a modern day setting. There's a very to-the-point review of it that says everything I would have written about it over at TELEPORT CITY, so check it out if you're intrigued. 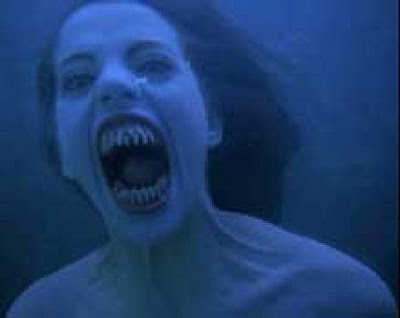 Sing along, kids: "Under the seeea...Oh, shit!!!"
DAGON's by the same people who did the superb and much more over-top-gory RE-ANIMATOR and FROM BEYOND (both highly recommended), but it's my favorite of the three for reasons the review nails perfectly. And despite my well-known love of gore, violence and mayhem, give me real, creepy scares and a compelling story over that stuff any day, and I hope we're on the same wavelength about that. But one brief caveat before you read the recommended review: TELEPORT CITY's reviews tend to start of with lengthy preliminary info before they get down to reviewing the movie in question and that's certainly the case with DAGON, but I urge you to read the whole article. The reviewer gives the newbie a crash course in Lovecraft basics and what he writes is both accurate and very funny, so don't skip over it!
Posted by Bunche (pop culture ronin) at Thursday, October 08, 2009