DOWN AT THE OL' SWIMMIN' HOLE

NOTE: While technically not occurring on the sidewalks of New York, I do feel this entry warrants inclusion in my category chronicling the wonderful sights experienced in this magnificent Rotten Apple.

So here it is, Monday again, and another work week begins. I arrived at work this morning and headed toward the kitchen to snag my frosty mug from the freezer — can't have mt dose of Dr. Pepper-provided caffeine without it! — and heard revolted groans of disgust issuing from the humble eating area. I walked in and found my co-worker/pal Nick staring aghast toward the sink after washing his hands and apparently catching sight of something nasty, so I asked him what had set him off. With eyes bugged in disbelief, he gestured toward the right of the sink with his head and my gaze followed his lead, finally freezing on the following charming sight: 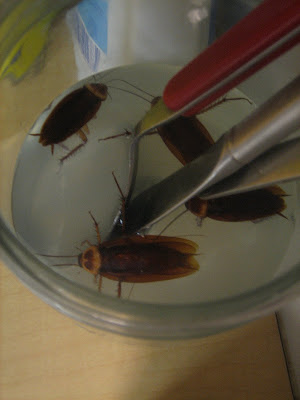 Four good-sized NYC cockroaches had been doing their thing in the kitchen over the weekend while we humans weren't infesting the place, and from the look of things it seems they decided to use the jar where people leave utensils to soak as a a swimming pool. Most likely Borgiaed by the dish-washing soap that saturated the water, the four little corpses bobbed silently amidst the spoon and two knives in what reminded me of a blattidae performance piece.

Though several of my co-workers were revolted by this tableau, some of us whipped out our cameras and captured it for posterity, far more intrigued by the unintentional beauty of the composition than grossed-out by the fact that there were four thumb-sized insectoid vermin bobbing deceased in a receptacle for instruments used by humans to eat and handle food with with.

If I were an ancient Greek I might read some sort of omen from this happenstance, but what could it possibly harbinger?
Posted by Bunche (pop culture ronin) at Monday, October 05, 2009

I was just finishing breakfast when I opened that.