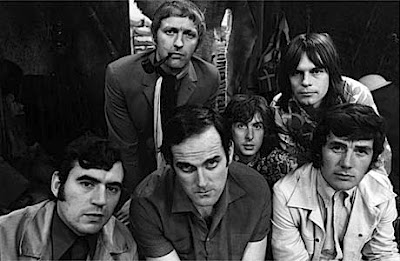 Today marks the fortieth anniversary of MONTY PYTHON'S FLYING CIRCUS, a landmark in comedy and still one of the most balls-out bizarre things ever to pollute the televised airwaves and warp the minds of youth, first in the United Kingdom and then later here in the United States.

There are few things in life that I find funnier than MONTY PYTHON'S FLYING CIRCUS and that includes the Python's subsequent work (although I do love that stuff too), and next to the Warner Brothers animated cartoons and NATIONAL LAMPOON (circa 1975-1983) there is no more significant influence on my sense of humor. I accidentally stumbled across the show one night back in 1975 (or thereabouts) during its initial run on Channel 13, a local PBS station, and I just didn't know what to make of a comedy show featuring Hell's Grannies, trippy animation, and a bunch of British weirdoes dressed as women and shrilly shrieking about a bunch of shit that didn't make sense. In fact none of it made a lick of sense, but it did make me laugh my ass off and got me interested enough to tune in again the following week. And the week after that. And so on for year after year. 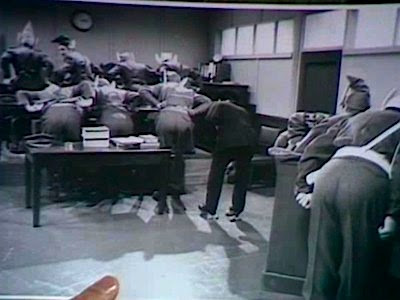 The musical "What the fuck?"-ness of "Anything Goes."
I truly love the utterly insane work of the Pythons during that seminal series, followed and enjoyed much of their later work, both Python-related and not, and I openly wept when Graham Chapman, my favorite of the lot, died of cancer. In fact, if I may be totally honest, even though I've never met them I always looked upon the Pythons as beloved uncles who influenced me with their "I don't give a fuck what people think" attitude and refreshing offensiveness, especially considering that my generation found them during a time when comedy was mostly a wasteland of bland, "safe" family comedy. Python hit the comedic landscape with the impact of an aggressively stupid, tasteless and silly thermonuclear warhead packed with rude language, weird historical references, nonsensical songs (their version of "Anything Goes" being of particular note), and god knows what all else. 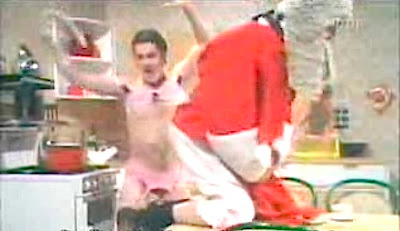 The short but sweet insanity of "Dad's Pooves," an alleged new BBC sitcom about "the wacky exploits of the oddest couple you've ever seen" who exist in "the kooky, oddball, laugh-a-minute, fun aplenty world of unnatural sexual practices." That's future BRAZIL director Terry Gilliam in the women's undies wielding the whip of sausages. NOTE: this sketch aired forever when the show was seen on PBS and other venues, so why was it missing when the series hit VHS and does it remain an omission on DVD? Anyone out there have an explanation for that?

It was and still is idiotic as hell, and we would all be much poorer had it never happened, so I extend the warmest of thanks and a heartfelt "Happy Anniversary" to the mad geniuses behind MONTY PYTHON'S FLYING CIRCUS. Thanks for everything, guys. And never, ever voluntarily be normal. 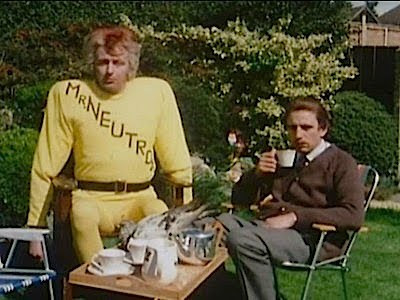 Tea with Mr. Neutron: about as normal as it gets in the world of MONTY PYTHON'S FLYING CIRCUS.
Posted by Bunche (pop culture ronin) at Monday, October 05, 2009

Yeah. Same here. My Dad introduced me to Python back in '75 or so. He called me into the TV room and invited me to sit down and watch Flying Circus with him. I was fascinated. He said, "I thought you might enjoy this." He was right. I was nine or so back then. Thanks, Dad. Score another one for you.

Oddly enough my oldest friend (I've known him since I was 7) introduced me to BOTH the Beatles and Python. Nobody except for my Mom has ever had a more positive influence on my life.

I had been away for summer vacation but when I returned he insisted I watch something called The Holy Grail. I was skeptic at first and was preparing myself for a boring experience. From the first gag (when you hear the clip clops and then see the two bits of coconut that are actually making the sounds) I was theirs. I couldn't believe the level of invention, the endless flow of great gags and memorable phrases. I couldn't believe these guys were human. Unfortunately Graham Chapman's passing proved that they were all too human after all. I love these guys down to the ground.
God bless them!