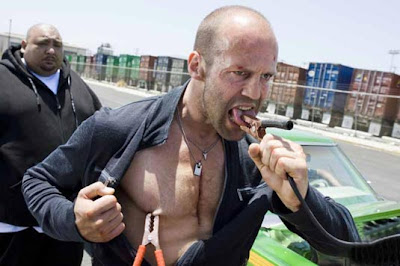 In my lifetime of seeing movies there have previously only been four movies that literally made me doubt my own sanity thanks to what I witnessed on the screen. EVIL DEAD II, MEET THE FEEBLES, DEADALIVE and DEATH WISH 3 all blew my mind for various reasons and made me ask "What the fuck?!!?" as their stories unfolded in glorious explosions of sheer lunacy, bad taste and utter outrageousness, and now I can add the deliriously out of its mind CRANK 2: HIGH VOLTAGE to that elite short list.

Picking up right where the last film left off, professional hard man Chev Chelios (my man Jason Statham) lands in the middle of an L.A. street after plummeting thousands of feet to earth without a parachute (don't ask) and inexplicably survives, little worse for wear. 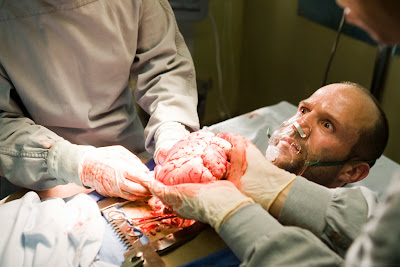 The brazen theft of Chev Chelios' "strawberry tart."
No sooner is our hero on the ground than a pack of Asian organ-harvesters pull up in a van and haul Chev's ass to some grungy makeshift operating room where they steal his heart and replace it with a temporary artificial stand-in. Y'see, Chev's organs are scheduled to be transplanted into the aging body of a Triad kingpin (David Carradine in a heavily made-up yellowface role so ridiculously outrageous that it erases any offense spurred by his portrayal of Kwai Chang Caine on KUNG FU), but when the thieves make to harvest his genitalia, Chev springs into action, kills his tormentors and embarks on a quest to reclaim his heart. The problem is that the artificial ticker he has in his chest is running on a dying battery and is not designed to continued strenuous use, so Chev has to continually recharge the fake heart as the story progresses, with each charge being achieved in a more insane manner than the previous. The "I don't give a fuck" awesomeness that was David Carradine.
Chev's search begins in the land of the over-the-top and only escalates into territory that takes the suspension of disbelief that we must employ to enjoy any action flick and throws it completely out the window. No bit of gratuitous violence is too insane for this film and its non-stop madness is only compounded by a cast of characters straight out of the imagination of a twelve-year-old appropriately cranked up on a fistful of Stud City animal stimulants. 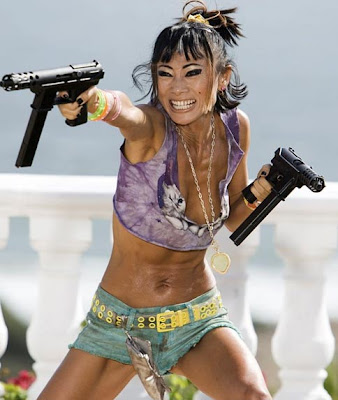 Bai Ling as chatty, foul-mouthed hyperactive whore Ria, a movie-stealing performance if ever I saw one.

Chev's path of vengeance and destruction weaves in and out of contact with the Triads, Mexican gangbangers, his faithful (though disgraced) heart surgeon pal (Dwight Yoakam), a manic hooker (Bai Ling, turning in a jaw-dropping performance) whose profane pidgin English is simultaneously hilarious and appalling, shirtless and gay would-be badass Venus (Efren Ramirez, best known as Pedro from NAPOLEON DYNAMITE)) who's out to avenge his dead brother but suffers from full-body Tourette's Syndrome, a troop of hardcore butch gay bikers who are Venus' posse, and a Mexican drug lord with a very personal and bizarre grudge against Chelios. 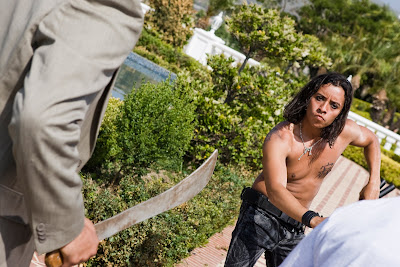 But the icing on this layer cake of cinematic bedlam is Chev's now-a-stripper girlfriend, Eve (Amy Smart, who deserves an award for taking a role that most other actresses would have instantly balked at for its take-no-prisoners bawdiness and semi-nudity), who is relieved to find that her man is not dead and stands by him like no other movie better half that immediately springs to memory. 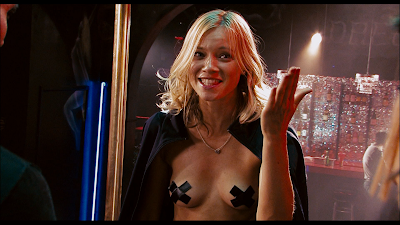 Best girlfriend ever: Amy Smart as Eve.
No lie, among the movie's legion of crazy and over-the-top set pieces, Amy Smart's involvement in the completely insane sequence taking place at a racetrack to the musical accompaniment of the Marshall Tucker Band's "Heard It in A Love Song" catapults her to the level of exploitation/action cinema immortality, and when I saw that sequence I laughed like a goddamned harbor seal. Ms. Smart, if you ever read this, you have my eternal gratitude for being one of the key elements that cemented this film's live-action cartoon aesthetic and mentality.

As mad as an outhouse rat, CRANK 2: HIGH VOLTAGE may just be my favorite movie of 2009. It's a finely orchestrated out of control bit of live -action cartoon madness that had me laughing my ass off from start to finish. In fact, I'd say it's pretty much what the makers of SHOOT 'EM UP were going for, only CRANK 2 fully embraces its own balls-out insanity and literally chucks all logic and any attempt at a connection with reality straight out the window with a two-ton anchor attached to its legs. If I had known how much I would have enjoyed it, I would have seen it at least three times during its theatrical run, something I have not done since ROAD HOUSE came came out. Oh, and you really don't need to have seen the first one to enjoy the sequel, so rent this motherfucker immediately. HIGHEST RECOMMENDATION.
Posted by Bunche (pop culture ronin) at Wednesday, October 14, 2009

Excellent review. After seeing the first Crank I couldn't wait to see this one. Having seen this one has enriched my life and given me a small glimmer of hope that good movies can still be made. Your review of Zombieland was also of much help. I enjoyed the fuck out of that movie. Have you seen Anvil: The Story of Anvil? In my opinion the three above mentioned films are the best I've seen this year or any year for that matter.

Joy of joys, I can actually get my hands on this flick at my local library. Which, considering I live in a fairly small community in Maine(they call it a city, but I used to live in larger neighborhoods in Chicago), is amazing. I'm surprised sometimes at the racy shit that finds its way into the public library DVD collection here...

...now, if the person who currently has it out would just return it so that the nice librarians can put it aside for me...

I'm in the middle of checking out this flick right now. I can tell that you're not a video game fan because that is obviously what this film is based on. Video game play and plots in general. It is filled with video game references. Having spent many hours pushing buttons to make pixels move around a screen this movie makes total sense to me in a nonsensical video game kind of way. It's not a live action cartoon; it's a live action video game. Having the movie start out as a video game was kind of a give away.

#1) Finally got around to seeing this and you are so dead-on: My God does this fucking movie rule in every conceivable way -- and LOVE the cameos from Chester Bennington and Geri Halliwell, among others.

#2) I think Amy Smart might be the most perfect woman ever created.