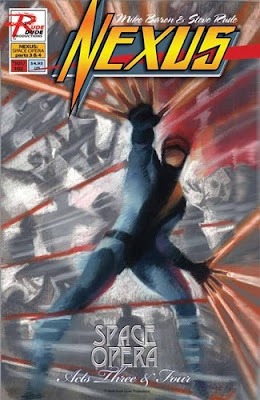 Cover to the double-issue NEXUS #101/102.
Here's the first of four NEXUS pages I received from veteran inker (and like-minded bad/cult movie junkie) Bob Wiacek. He did his singular magic over Steve ("the Dude") Rude's gorgeous pencils and the results are quite fine. These are from NEXUS #102, "A Death in the Family," the final chapter in the "Space Opera" arc. The sequence that stood out most for me did not feature the book's hero or his awesome and frequently heroic sidekick, Judah, but was instead the long-in-coming to-the-death throwdown between hero Nexus' lover, Sundra Peale, and her super-spy former commander, manipulative and deadly uber-bitch Ursula XX Imada. 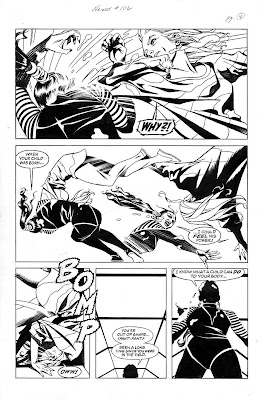 Ursula's been a very dangerous fly in the major characters' ointment for a while but was allowed to continue breathing mostly because she's the mother of Nexus' daughters (more on them later), but when Ursula abducted and threatened to kill Sundra and Nexus' infant son, Harry, all bets were off. 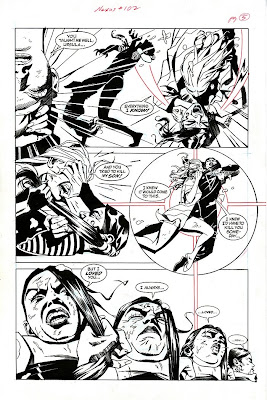 Lesson to be learned: never fuck with a mother's baby. 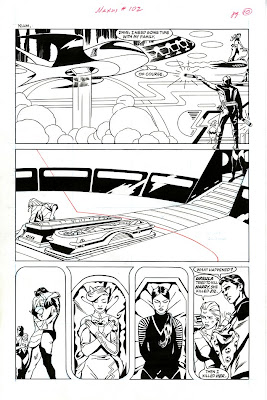 The funeral of the awesome Jilquoix DeSmoot-9 (better known, and beloved, to NEXUS readers as simply Jil) and Ursula XX Imada. Good riddance to the latter, says I. 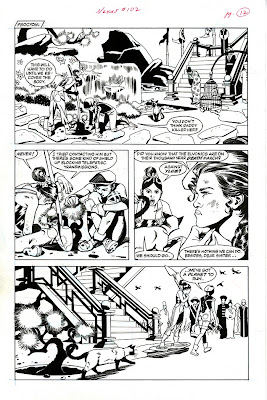 Here's the page in which Nexus' daughters by the now stone dead Ursula, Sheena and Scarlett, sense their mother's death. This is heavy stuff because although their mother was a monster, the girls are a lot like their father (right down to the fusion-casting abilities), so I'm curious to see how this plays out (although the gods only know when we'll get to see it since NEXUS is once more on hiatus for the foreseeable future...).
Posted by Bunche (pop culture ronin) at Tuesday, October 13, 2009

Oh, beautiful! Nexus is damn near the only thing not produced by Evan Dorkin (I know, different stuff entirely but I've always thought Dorkin's funny as hell plus he's a ska buff) that I'd go running back to the comic shop for!

(by the way, the local comic store up here - Harrison's - is one you'd like.)

Dude you are hilarious and your writing style is easy going and fun to read. I hate Statham action movies, but your review actually makes me want to rent Crank 2.

This might be the only blog I've read that didn't bore me after two posts or make me think the author was a pretentious narcissist.

Nexus was the bomb but turned into an over plotted soap opera. Sundra this Ursula that shenna this WHO CARES. Can we just have Horatio Kill baddies and meet new friends and foes again. Nope. We just got recycled plots and characters for most of the last years of Nexus. Glad ts over. My fearis it comes back for the continued subplot of Scarlet Sheena and blah blah blah...