A HOPE-FILLED VISION OF A BLISSFUL UTOPIA...OR YET ANOTHER BIT OF PLOTLESS TENDERLOIN WANK-FODDER?

Sometimes pornography just isn't as high-minded as one might be led to think it can be. A case in point: 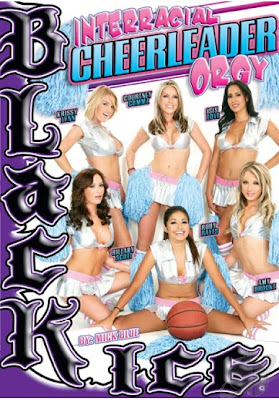 I don't know about you, but when I saw the title INTERRACIAL CHEERLEADER ORGY it conjured up visions of some Elysian paradise in which all could co-exist in blissful harmony punctuated by an understanding born of the most intimate form of human communication. Well guess again, bunky. That wonderful reverie was dashed against the rocks upon perusal of the disc's back cover — which is too raw to run here, sadly — that depicts a number of Caucasian lasses playing cheerleaders having the limits of their vaginal pliability tested by a number of dusky gentlemen in the role of professional basketball players, each possessing a unit not dissimilar in length and girth to that of a garden variety pepperoni. I suppose even that could have been made to sound somewhat appealing, but get a load (no pun intended) of the copy that someone was paid to write for the disc's ads:

That text was cut and pasted directly from Adult Video Universe's site, so I didn't alter it in any way. HOOSIERS this ain't. And come to think of it, with just two seconds of mulling it over, the filmmakers could have had a winner of a parody title on their hands with the obvious HO-SIERS. The laziness of today's pornographers simply appalls me...

But at least the Slut Squad FINALLY has something to cheer about!

I was worried for a while there...