The Billboard Top 100 can occasionally be home to some of the most unlikely and completely effed-up ess one is likely to come across in any realm of American pop culture, and some of those questionable songs actually manage to crack the Top 40 for reasons that defy all conventional arbiters of sanity. One of the greatest examples of this was the 1971 song "Timothy," performed by a band called the Buoys, a group from which songwriter performer Rupert Holmes sprang and later graced the world with "Escape (The Pina Colada Song)," which is rather amazing considering that he first wrote "Timothy," a song infamous for its intimations of cannibalism. 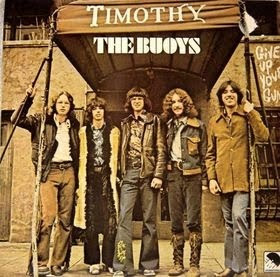 Banned outright in some radio markets, "Timothy" never explicitly stated "Sweet jumpin' Jesus in a basket of chicken! This song's about two guys eating their friend!!!" but the main thrust of the song is simple enough for even a six-year-old to figure out, which is how old I was when I first heard it. During a time of such Top 40 hits as George Harrison's "My Sweet He's So Fine," er, "My Sweet Lord" (*AHEM*), Donny Osmond's "Go Away Little Girl," "Theme from SHAFT," and Melanie's "Brand New Key," you've gotta admit that such a relatively bubbly tune about cannibalism borne from desperation was not something one would have expected to chart at all, much less end up peaking at #17. No, seriously!!! I remember being quite confused by "Timothy" because such madness just did not occur on the radio back in those days, with perhaps its closest antecedent in morbidity being Jimmy Cross' 1965 parody of the period's ultra-depressing wave of teen death ballads, "I Want My Baby Back," which includes a punchline that isn't a far leap from outright necrophilia and peaked at #92. (I didn't hear that song until I was in high school, after which it became one of my favorite records, appealing to the more Charles Addams aspects of my sensibilities.)

Anyway, "Timothy" is surprisingly sprightly for a tune so dark, punctuated as it is by chirpy strings and a melody you'd totally ignore...until you paid attention to the lyrics, which are found below in an effort to have some appropriate material as a lead-in to Halloween. Aah, that's bullshit; I'm simply burnt out after the past few days and was fishing for post material, so there you go. Whatever the case, "Timothy" remains as a unique landmark in the annals of the Top 40. (And how!)

Hungry as hell no food to eat
And Joe said that he would sell his soul
For just a piece of meat
Water enough to drink for two
And Joe said to me, "I'll have a swig
And then there's some for you."

I must have blacked out just around then
'Cause the very next thing that I could see
Was the light of the day again
My stomach was full as it could be
And nobody ever got around
To finding Timothy
Timothy...
Posted by Bunche (pop culture ronin) at Tuesday, October 27, 2009

The lesson everyone - don't turn your back on a hippie. They will knock you over the head and eat you, and then drink their Pina Colada as they contemplate their yuppie futures.

Wow, I was in high school when this hit the charts.

Like Suzanne Vega's "Luca", it's got a peppy beat and disturbing lyrics.