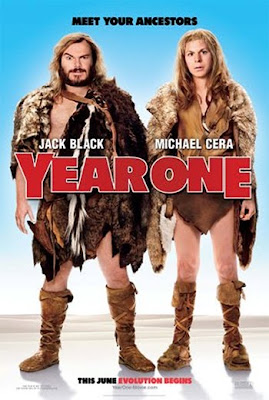 NOTE: this review contains minor spoilers. You have been warned!

Harold Ramis' biblical-era comedy YEAR ONE opened in June to mediocre reviews and I can certainly understand why, but now that I've seen it on DVD in its unrated version I say it deserves a second chance. It in no way great, but, well, lemme explain...

The film follows the other-than-heroic journey of Zed (Jack Black) and Oh (Michael Cera), two members of a tribe of primitive hunter-gatherers who live in what was once the Garden of Eden. Zed's a skunk pelt-clad fatassed loser of a hunter who's loathed by nearly all of his tribe for his not incorrectly perceived uselessness, while Oh is the quiet, weak and sensitive brain of the clan whose smarts got totally unappreciated, so of course these two misfits are pals because no one else will give them the time of day. After laying out the futile and unrequited love the boys have for two attractive tribeswomen (June Diane Raphael and Juno Temple), the plot advances things by having Zed violate the tribe's one absolutely carved in stone rule and eat the garden's forbidden fruit, leading Zed to incorrectly conclude that he's suddenly the super-intelligent "chosen one." His transgression is soon discovered and Zed is banished from the tribe, with his friend Oh reluctantly tagging along (after Zed accidentally burns the village to the ground), and the two embark on an odyssey that brings them out of the garden and into the world beyond for the first time. There they meet Cain (David Cross, who's awesome as always) and witness him committing history's first murder, and from there it becomes a shorthand burlesque of the stories of Abraham and Sodom and Gomorrah (Sodom, actually; Gomorrah is visible from across the way, but never ventured into). During the course of their misadventures, Zed and Oh discover that their tribe — and more importantly the girls they desire — has been sold into slavery in Sodom and must be rescued, a task that the pair is woefully unsuited to pull off. Plus, God's about to wipe the infamous city of sin off the map with a rain of fiery destruction, so time is definitely of the essence...

YEAR ONE's big problem, like the majority the majority of Ramis' fourteen feature films — CADDYSHACK, GROUNDHOG DAY and NATIONAL LAMPOON'S VACATION being the obvious exceptions —, is that it simply isn't as funny as it aspires to be or thinks it is, but the film is helped by its leisurely pace and amiable goofiness, two factors that add up to make it a film I'd bet will catch on with the stoner audience once they discover it on cable. Its essentially lighthearted and certainly has many amusing moments, more than enough to have held my interest, and features a number of bits that were indeed memorably funny. For instance: 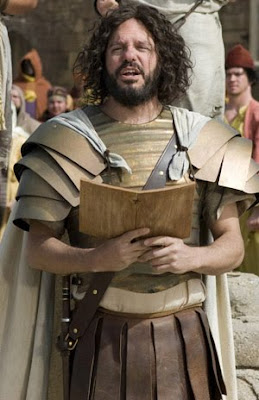 Cain reads the sentence of the condemned, including charges such as "leprosy, puppetry, animal husbandry, and not committing sodomy." 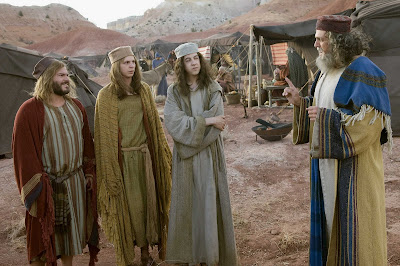 Abraham asks the lads to wait while he goes off to retrieve his best knife for their imminent circumcisions. 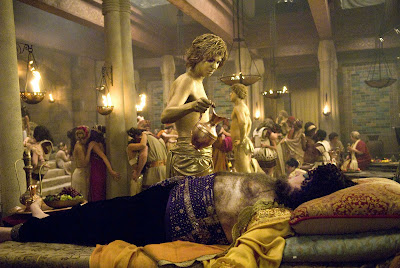 The film's cast is quite game and their anachronistic behavior and turns of phrase work well when lampooning the biblical epic genre, although a little of jack Black usually tends to go a very long way for me, but he keeps his signature schtick reigned in just enough to be tolerable. Michael Cera is perfectly cast as Oh and if anyone in the story can be seen as a bemused stand-in for the 21st century human being, it's him; everyone else is pretty much a cartoon character, but we've all either met or been Oh, and thus we totally feel every bit of his annoyance, disappointment, and haplessness in the face of a world much more violent and testosterone-driven than he is.

If you do decide to give YEAR ONE a shot, make sure you see the unrated edition. I didn't bother watching the theatrical PG-13 version (which is included on the disc with the unrated version), and if you ask me the unrated is a "hard" PG-13 at best. I mean, there are maybe one or two utterances of "fuck," a little gross-out humor, visual and verbal sexual innuendos and gags that are in no way R-worthy (not even the one featuring a girl basically giving head to a banana), and even the big orgy scene in Sodom displays nothing that would get cut for a network TV broadcast, so why the version I saw wasn't given a plain old PG-13 is beyond me. The story takes placing in (literally) goddamned Sodom and there's not a trace of nekkid flesh or any of the more scurrilous behavior that the place was famed for to be seen, so how could this ever have been considered for anything other than a PG-13? I swear, I will never understand the arbitrary nature of the MPAA...

Anyway, YEAR ONE is worth a look, provided you're not expecting anything along the lines of MONTY PYTHON AND THE HOLY GRAIL. Just make sure to have a hookah, fully loaded with some skunky buds, close at hand.
Posted by Bunche (pop culture ronin) at Monday, October 12, 2009