My girlfriend asked me to kiss her where it smells, so I took her to Staten Island.
-ancient groaner of a joke

After walking the floor all day at the Big Apple Con on Saturday, I made my way to my friend Stephanie's art show/auction on Staten Island (my first trip to Staten Island, by the way) and while waiting for the ferry to arrive and haul me over to S.I. myself and the crowd awaiting the boat found ourselves trapped for a half hour with a ranting Jesus freak whose disjointed fire and brimstone sermon was greeted with apathy at best. I hate being in any public place or method of conveyance where I have no choice but to sit there and take it while beggars, street musicians, singers — both legitimately good and ear-wiltingly horrible — break dancers and whomever else essentially hold me captive while they do their thing, but I find the religious zealots most annoying of all because of my own lack of interest or belief in organized religion, and those who see fit to push their views on me when I have no avenue of escape drive me completely fucking batshit.

I took a seat in the Staten Island ferry's waiting area and began re-reading Stephen King's PET SEMATARY (in my opinion the best thing he ever wrote) and was almost fully re-absorbed into its bleak world when a trendy-looking twenty-something in a leather jacket began to let forth at top decibels about how all present were going to go straight to Hell for our wickedness and all the other stuff that I'm practically convinced was culled from some pre-existing script filled with loony intolerance. Even the Christians in attendance (so noted because they carried bibles) were put off by this guy and visibly shook their heads in embarrassment, so that should give you a clue as to how irritating he was.

The guy's rant touched on the "wrongness" of interracial congress and, of course, the "vile abomination" that is homosexuality, and at that point one could tell that the audience had had more than enough, so much so that the palpable hostility caused a a young Cugine in a hoodie to comment on how the situation looked like it was "about to get awesome." But rather than have things degenerate into what could have been a riot punctuated by bloodshed and utter negativity, providence stepped in in the form of one of those performers who have mastered the art of standing still to in essence become a human statue. The silver-painted performer in question silently wandered into the street preacher's place of power and simply froze, offering not one word of rebuttal but speaking volumes as he stole the zealot's thunder and elicited titters from the crowd. 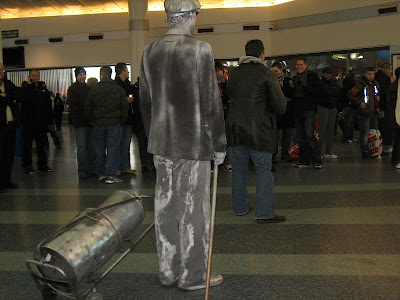 Statue Dude would slightly change position every few minutes, but he did nothing actually obtrusive other than just offering mute counterpoint to the preacher's hate-filled histrionics. 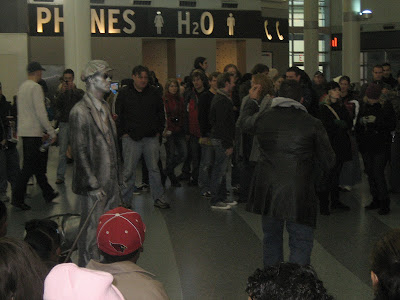 When the Jesus-freak finally noticed him, I was amazed to see the preacher obviously register Statue Dude's presence but not respond to him at all, instead ignoring him in hope that he would simply grow bored and go away. Needless to say, the preacher's opponent was a master of silence and immobility, a skill he displayed daily in pursuit of tourist's spare change, so leaving was simply not going to happen and the guy could have easily continued to stand stock still indefinitely. 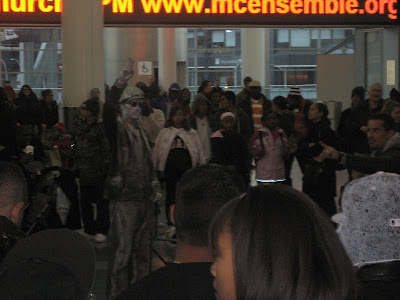 This battle of silent mockery and warped religious fervor continued until the ferry drifted into view and the worn-out audience sought refuge within it, at which point the zealot concluded his fruitless ranting and the Statue Dude found himself on the receiving end of chastisement from an onlooker who was apparently a cohort of the preacher. Heroically, rather than offer verbal response to that, Statue Dude simply hung his head and exaggeratedly slinked away, looking like a live-action cartoon and utterly taking the piss out of his scolder. A classic NYC moment.

Oh, and that joke about the smell? The first thing I noticed when disembarking from the ferry was the pungent reek of one of the area's toxic landfills. Believe me when I tell you that Vaginosis is more appealing.
Posted by Bunche (pop culture ronin) at Tuesday, October 20, 2009

Now there is an example of peaceful protest and non-violent conflict resolution Jesus would be proud of.

(I refer, of course, to statue man's example, NOT embarrassment-to-my-faith man...)

"I kissed my love on Rivington, and she thought it was Grand."

I read Pet Sematary once. Of all the King novels I've read, that's the one that I cannot and will not reread, because some of those images are seared into my mind for nightmares.

And I hope the statue guy got lots of tips that day.