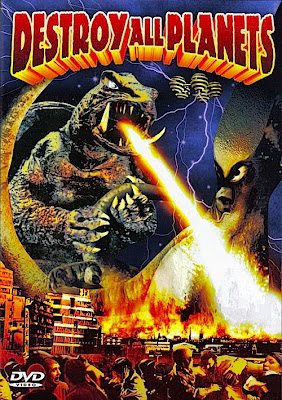 For the first time in about thirty years I once again saw former 4:30 MOVIE "Monster Week" mainstay DESTROY ALL PLANETS, and again I was reminded of exactly why I hated Daei's Gamera series, even when I was of the age the films were targeted to, yet at the same time also appreciated them for some occasionally very inspired ideas for monsters.

As we all know — or at least as we who are giant monster movie-junkies know — , gigantic flying (?) turtle Gamera is the "friend of all children" and protector of Japan (and by association the entire Earth), and woe to any tatty rubber-suited foe who offered threat to either. That was the formula for the majority of the films in the series — the lone exception being the initial installment, in which Gamera was itself a destructive threat — and in some cases Gamera's monster adversaries were more fun and interesting than our ostensible hero. A perfect case in point is DESTROY ALL PLANETS' bizarro antagonist, Viras, a technologically advanced kinda/sorta space-squid with designs on conquering the Earth with the aid of some henchmen who look like beret-wearing, besmocked elementary school art teachers.

Viras is cooler than penguin shit, but rather than fully concentrate the narrative on him and his inter-galactic evil, the filmmakers once again give us annoying kid protagonists, this time a pair of boy scouts, one a precocious Japanese genius and the other apparently an American (making the film potentially more lucrative in the non-domestic market). The boys steal an experimental mini-submarine and require rescuing by Gamera and once the rescue is accomplished, Viras's spaceship scans Gamera's mind to learn exactly what kind of creature offers such fierce opposition to its tentacled world-conquering. 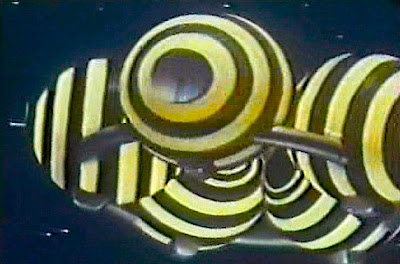 Viras's beach ball-like spcecraft.
That mind-scan leads to the most egregious example of one of the flaws that the Gamera series is justly infamous for, namely padding out the running time (and saving on budgetary expenditures) with stock footage from previous films. DESTROY ALL PLANETS was the fourth Gamera flick, so the filmmakers had three previous movies to cherry-pick from, culling twenty solid minutes (!!!) of monster fight footage that brings the film to a complete halt as the audience is forced to sit through tons of low-budget stuff they'd most likely seen in the theater during the earlier films' original releases. There's no attempt at editing the stock footage in such a way as to make it exciting or even interesting, to say nothing of trying to hide the fact that the first film was in black & white, and when the stock footage parade finally ends, Viras puts Gamera under mind-control, which leads to...more stock footage from the first two films, again not giving a fuck about some of it being in black & white. (At least no one can complain about the film lacking in tons of monsters and scenes of destruction, whether or not it's stock footage.) Anyway, Gamera is eventually freed from Viras's thrall and sets about kicking ass in earnest. To counter this, Viras surrealistically beheads its followers and absorbs their bodies into its own, causing it to grow to a size comparable to Gamera's. 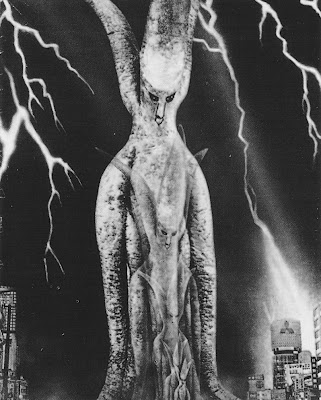 The rest of the movie thankfully more or less forgets about those irritating kids and lets fly with some impressive and fun giant monster ass-whuppery, merrily displaying the one thing Daei's flicks had over Toho's Godzilla series: mildly graphic gore! In Gamera's battles, serious injuries were commonplace, both for the hero and the villain, replete with spewing (blue) blood and the occasional maiming or dismemberment. This time around, it's Gamera who gets the worst of it, especially once Viras folds its head up into what amounts to a spear and damned near succeeds in putting it all the way through the heroic turtle's chest. And it looks like it really hurts! 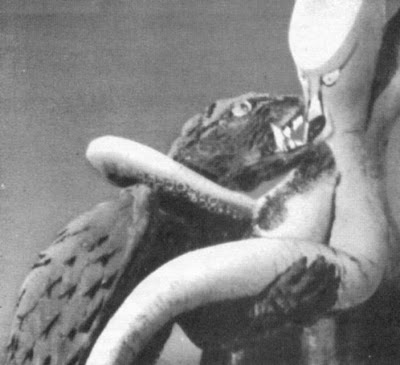 "In the midst of world-conquering, romance steals a tender moment": is it just me, or do monster fights sometimes look like the creatures involved are having passionate sex?

Eventually Gamera wins and the Earth is saved. THE END.

DESTROY ALL PLANETS is flawed, to say the very least, but it's a time-waster of a kiddie movie and works well enough as such. But the one thing that sets it apart from the legion of rubber-suited monster opuses unleashed in the 1960's is Viras, a goofy-looking and truly inspired creation that's the first creature fought by Gamera possessing an intelligence above that of an animal (the later Zigra being another). Viras's features bring to mind an unholy fusion of a character from an old Sid & Marty Kroft show, H.P. Lovecraft's Cthulhu, and a pissed-off Cockatiel, so with those elements factored in and a bunch of flailing rubbery tentacles for accent, what's not to love? Not only is Viras my favorite monster in the original Gamera series, he's also one of my favorite Japanese monsters, period. If you see this film for no other reason, check it out for Viras. 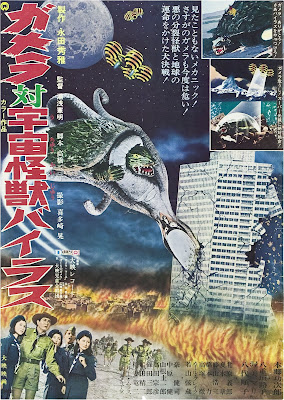 Poster from the original Japanese release. Note how Viras' head is shoved through a crumbling skyscraper. Now that's how you do a movie poster!
Posted by Bunche (pop culture ronin) at Friday, October 02, 2009