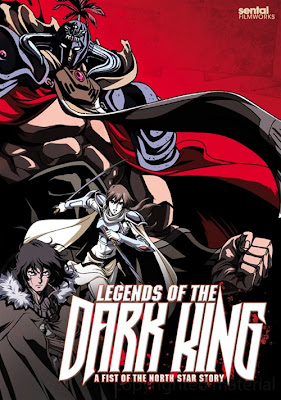 One of the things that makes absolutely zero sense to those who aren't into FIST OF THE NORTH STAR and its post-apocalyptic testosterone-fueled martial excesses is how anyone could care about a series whose protagonist, Kenshiro (or Ken for short), is so one-dimensional. At first glance Kenshiro is indeed something of a block of wood that bursts to lethal life, but that's due his sadness over the fates of all his friends, his favorite brother's slow death by radiation poisoning, the inevitability of his destiny, blah, blah, blah, pfooey. When I first got into the series via its animated TV version, I was drawn in by its then-startling level of violence and only gradually got involved in the story (I watched it untranslated, so understanding the intricacies of the narrative was slow going at first), and when I finally sussed out who was who and what was what I did not count Ken as my favorite character. That distinction fell to Raoh, the eldest of the North Star brothers and by far the most badassed of the lot. 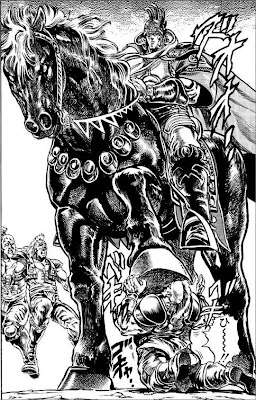 Raoh as seen in the manga, atop his equally dangerous war horse, Koku-Oh ("Black King").

Visually cribbed from Frank Frazetta's painting of "The Death Dealer" — and with more than a little bit of Darth Vader thrown into the mix — Raoh was the ultimate exponent of "might makes right" and woe to those foolish enough to disagree with him or stand in the way of his acquisition of power. When introduced into the story, Raoh was a gigantic presence that even struck fear into the hearts of Kenshiro and his ailing, Christ-like brother, Toki (who would have been the successor to the family's martial art due to his skill and overall decency as a human being, but that's another story), and considering how much refined, badassed power those two wield, that's really nothing to sneeze at. When he finally appears in the flesh after a long, impressive and very ominous buildup, Raoh proves to be every bit of what his legend hypes him up to be and the narrative sets him up as the central antagonist for the whole series; this guy, moreso than any other crazed and superpowered martial arts megalomaniac faced by Kenshiro (with the notable exception of the unspeakable Souther), was the hero's raison d'etre, the black reflection that had to be overcome if the earth were to be saved by Kenshiro's benevolent restoration of justice and order. 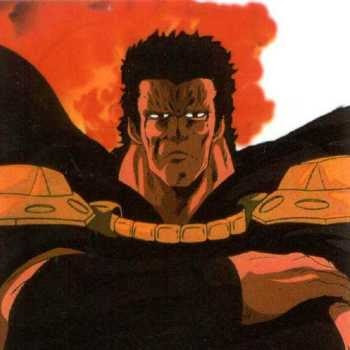 But while nearly every other bad guy faced by Ken was there solely to be evil and eventually blown to bloody chunks of meat following the judicious application of Hokuto Shinken to the proper pressure points, Raoh's personality and motivations were explored in great depth, giving this once jet black personification of tyranny, violence and death a level of shading that found me feeling a lot of sympathy for him and the tragic forces that made him into the monster that he became. His history was marked with a deep love and respect for the pacifistic Toki (who was also his biological brother, whereas Ken was one of four sons adopted by the Hokuto Shinken grandmaster) despite Toki's considerable potential as a threat to his campaign, and also by his borderline-insane ambition to be the strongest thing in all of creation, but little was known of Raoh's history following his departure from the Hokuto Shinken temple (after he murdered his adoptive father) and the moment when he and Kenshiro faced off for the first of two literally earth-shaking confrontations.

That narrative blank is finally filled in with the arrival of LEGENDS OF THE DARK KING, first as a manga series and now as a thirteen-part anime series. The second I found out about it being available in a licensed 2-disc DVD set with subtitles, I ordered it without hesitation and began watching it last night. 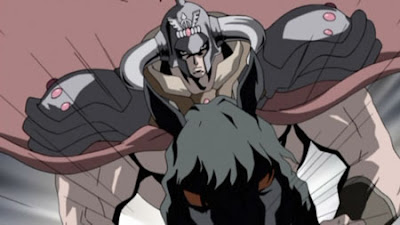 Raoh and Koku-Oh as seen in LEGENDS OF THE DARK KING. I'm not digging the designs, but...

I'm six episodes in and while I'm not exactly thrilled with the animation designs, I can honestly say that LEGENDS OF THE DARK KING is easily the best treatment FIST OF THE NORTH STAR has received since its heyday on TV in the Eighties. The tragic, opera-like tone is in full effect, new and old characters take the stage, and all the raucous violence that made FIST OF THE NORTH STAR a classic is on hand, only this time with a tighter script and a narrative whose rambling is reigned in by a thirteen-installment format rather than being allowed to unfurl over a hundred-and-fifty-some-odd episodes. Even the recently-added supporting characters, Souga and Reina, a pair of siblings who act as Raoh's most trusted companions and military aides, are finally made interesting and actually compelling, so it's a win/win all around.

But, as previously stated, the animation designs are not very good, at times seeming either cheap-looking or not all that fleshed-out, yet I endured the original series' wildly-diverging animation looks, an aspect wrought by several animation teams working on that show at once and apparently none of them working from the same model sheets, as well as there being several directors who approached the material in differing styles, so I guess I can live with the new stuff's look. Whatever the case, I'm very happy with what I've seen so far, and the series gave me its first "OH, SHIT!!!" moment not even four minutes into episode one, so what's not to love? 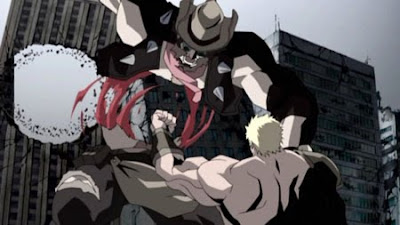 The first of many "OH, SHIT!!!" moments to be had in LEGENDS OF THE DARK KING. Note that the sheer force of Raoh's punch splits his opponent in half and proceeds to knock a hole through the ruined skyscraper in the distance. Eat yer heart out, Kal-El!

I'm going to get back into it this evening, but judging from what I've already seen I'm willing to give this a hearty recommendation to all you FOTNS fans who may be reading. Good stuff!
Posted by Bunche (pop culture ronin) at Thursday, October 15, 2009

Labels: FIST OF THE NORTH STAR

Legends of the Dark King's a little too "smooth"-looking for my liking, and I think Raoh in particular looks a tad too young.
However, that's not enough to put me off, and I did enjoy seeing the first episode. Plus, I'm looking forward to Souther's appearance.

I AM SHOCK! Thanks for this write-up. I wasn't aware this was even going to happen. I will be grabbing it this weekend.