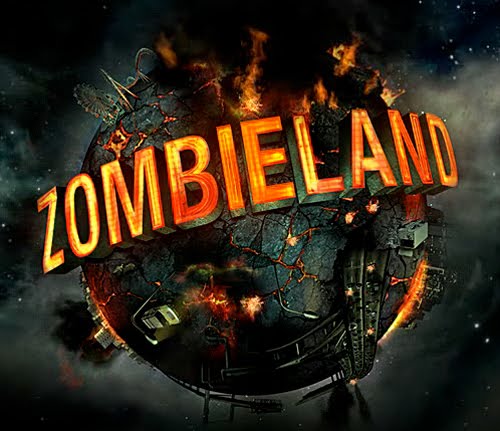 It's been said by various highbrow film critics and analysts that horror movies reflect the societal zeitgeist, so I don't know what the past decade's spate of zombie movies has to say about our collective state of mind. Films about the undead are nothing new, but there just seems to be a lot of them lately and they vary widely in quality and I'm not really the guy to comment on them fairly from a zombie fan's point of view — something my pal Jim Browski is definitely well suited to do, and so I extend the invitation for a guest post — but I will say that ZOMBIELAND is a fast-paced and fun take on the whole "it's the end of the world and the hungry dead are everywhere scenario." Kind of a comedic head-on collision of a Romeroesque apocalypse scenario and the visceral thrills of a "shooter" video game, the film has little on its mind other than being an amusing, violent popcorn flick, and that's a goal at which it succeeds quite well. 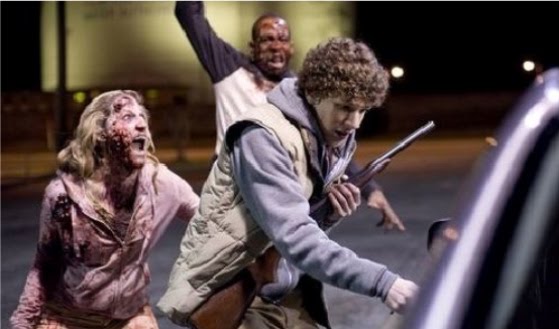 ZOMBIELAND drops the audience right into a world already crawling with zombies, and while it's bad enough that legions of ravenous flesh-eaters are literally every goddamned place, what's even worse is that these aren't the rigor-ridden shamblers as seen in most horror films of yore; rather they're quite spry and able to sprint after you, so unless you're in good shape, that's your ass.

The film's ostensible hero is "Columbus" (Jesse Eisenberg), so named for his intended destination, where he hopes against all odds to find his parents still alive. He's a college-age nerd and loner whose lifetime of friendlessness has given him time to think and develop an analytical mind, and once the zombie plague breaks out he's ready for it with a list of basic common sense rules relating to the world's new and utterly deadly status quo. With damned near everybody (un)dead, it's a simple matter to appropriate vehicles and high-gauge weapons, but when Columbus totals his car, he hits the road on foot and eventually is given a lift by "Tallahassee" (Woody Harrelson, looking exactly like a comedic version of his Mickey Knox from NATURAL BORN KILLERS), a redneck genius at zombie-killing who shows up in an SUV equipped with a cow-catcher up front. The two set off together and then encounter a pair of sisters, "Wichita" (Emma Stone) and "Little Rock" (Abigail Breslin), a couple of smart, ruthless and totally survival-oriented chicks whose personal philosophy can be summed up as "trust no one but each other and look out for Number One." These two give the guys quite a hard time and outfox them on a few occasions before teaming up with them and more or less aimlessly journeying through "Zombieland" (the nickname for the world at large) and becoming a loose-knit family in the process. 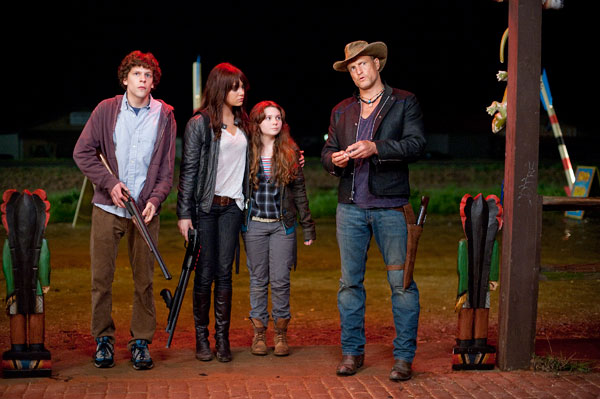 To say more would give away a lot of fun stuff — especially a major surprise cameo that I know for a fact has been let out of the bag on many sites and in many reviews, but I'm not gonna do that; in fact, if anyone starts to tell you about the cameo sequence, punch them in the mouth, Hard — So I'll just stop right here and instead off a little advice.

Go see ZOMBIELAND while it's in the theater. It's thoroughly entertaining, very funny, and is definitely worth paying full price to see. In terms of attitude, it's America's answer to SHAUN OF THE DEAD (though admittedly not as good), and the appetite for destruction that is so hard-wired into the American psyche is given full unintentional (?) reign. However I do have two warnings about the film:
So with that said, check out ZOMBIELAND. And if you have kids who want to see it, I say it's perfectly suitable for any who are around ten and older, provided they can handle the gore. The cursing is nothing they don't hear everyday at school (or, if truth be told, at home), there's no sex, and the violence is nothing new to them if they've played some of the more violent adult-oriented video games (c'mon, don't delude yourself into thinking that they haven't), and when you add a general sense of good-natured fun to those elements, I'd say it's really little worse than an exceptionally gory PG-13. And for those of you who like to have these things spelled out on a numbered rating, I'd give this a very strong four out of five, with the one star it requires for a perfect score being held back solely for the very stupid script fuckup near the end. Lesson to be learned: let no zombie stand in the way of Tallahassee's quest for Twinkies.
Posted by Bunche (pop culture ronin) at Tuesday, October 06, 2009

Kevie Metal said...
This comment has been removed by a blog administrator.
4:26 AM

> I don't know what the past decade's spate of zombie movies has to say about our collective state of mind.

It says, "Your fellow citizens are brain-dead hyper-consuming drones who may at any moment kill you" - a perfect summation of the last eight years.

The cameo bumped this flick from "Decent zombie fun" to "Must see". Thumbs-down to the d-bag reviewers who leaked it, and mad props to Sony for taking the unusual step of digitally editing the trailer to keep it a secret (do a frame still on the trailer scene where Wichita clocks Tallahasee with a golf ball, and you should know what the edit is)

I actually scoured the Web looking for that spoiler... because if they'd kept the cameo they had in the original script, there would be mass rioting, and I absolutely had to know wtf was going on. So count me as the one grateful reader. Strange days.