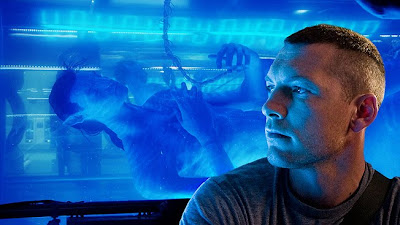 Paraplegic ex-Marine Jake Sully (Sam Worthington) prepares to transfer his consciousness into a fully-functional Na'vi body and get to know the natives on the planet Pandora.

By now I would bet that you've heard all manner of stuff about James Cameron's ultra-lavish 3-D spectacular, AVATAR, but since you read this site — replete as it is with endless ruminations on movies and what does or does not make them work — you're most likely interested in Yer Bunche's take on the ALIENS director's latest effort. Well, I'm getting to that shortly, but first here's what you need to know about the story.

AVATAR takes place in the year 2154 on Pandora, a moon of the planet Polyphemus, and tracks the journey of paraplegic ex-Marine Jake Sully (Sam Worthington), who replaces his murdered brother on a fascinating mission: the RDA corporation seeks to exploit the vast resources of Pandora — most notably the ridiculously-named "Unobtainium" — and essentially render the place an environmentally raped place like the Earth (which we're told is now pretty much barren and bereft of anything green on its surface, which would make the planet uninhabitable, but I digress...), but standing in the way of this environmental-rape is an indigenous people, the semi-feline and 10-foot tall Na'vi. Since Pandora's atmosphere is not breathable by humans, irascible Dr. Grace Augustine (my girl Sigourney Weaver, rocking the screen yet again in her sci-fi element) has developed the Avatar Program, in which a genetically engineered body spliced from human and Na'vi DNA is grown and into which a human operator's consciousness may be transferred in an effort to mingle with and get to know the natives. Sully takes his brother's place in the program (by dint of his DNA being compatible with his brother's avatar, plus his handy military/defensive skills as a soldier) but he has no training in the ways and language of the natives, an aspect that doesn't suit Dr. Augustine at all, but what choice has she got? 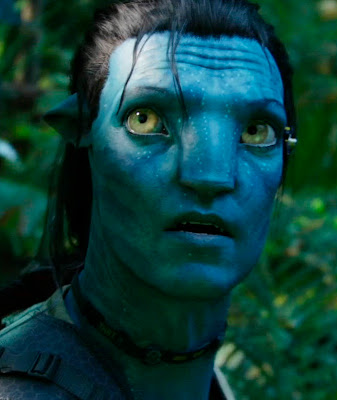 Jake in his Na'vi avatar form.
Unbeknownst to Dr. Augustine, Jake is tasked by testosterone/sadism-fueled Col. Quaritch (a superb villainous turn by Stephen Lang) with using his avatar form to infiltrate the Na'vi and convince them to vacate the territory designated for mining or face the most dire of consequences for non-compliance. Given a window of three months to accomplish his mission, Sully ends up getting thrust head-first into the Na'vi way of life when he's accidentally separated from his team of fellow avatars and rescued from Pandora's hungry fauna by Neytiri (Zoe Saldana), a beautiful native and member of the Omaticaya tribe. 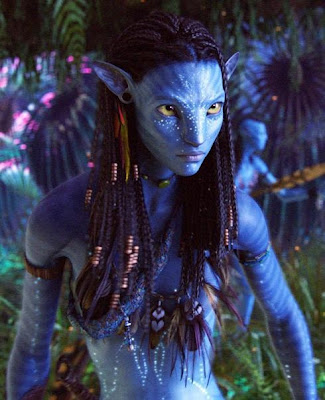 Assigned by her people's shaman (who also happens to be her mother) to teach Sully the ways of the Na'vi after signs that he may be favored by their deity, the mother goddess Eywa, the huntress and the Earthman grow close and Sully "goes native" with a vengeance and finds himself becoming more Na'vi as his very literal connection with their world grows with each passing day, a state of self-realization and enlightenment that directly conflicts with his orders and sets in motion a horrifying clash of technological superiority and corporate greed with Pandora's rightful inhabitants. But what the humans don't realize is that there's more going on here than just callously kicking the collective ass of an entire world's people...

One of the critical brickbats hurled at AVATAR is that it's derivative of several works, DANCES WITH WOLVES being the most frequently cited parallel, but since it's basically a sci-fi allegory about heavily-armed greed/superiority-driven assholes bent on destroying a way of life they neither understand nor care about and one of their own recognizing what's wrong with that outlook and siding with the people he was sent to lay waste to, I doubt there's much that could be done to put an original spin on the narrative, be it science-fictionalized or not. The film was also pre-judged for the look of the Na'vi, namely that the CGI that brings them to life was not very convincing, prompting some wags to declare the film to be "CAPTAIN PLANET with cats" before they'd actually seen the movie. I admit that I have often pre-judged movies by virtue of their trailers or pre-release posters — Jackie Chan's upcoming THE SPY NEXT DOOR being the most recent example of that propensity — and to some degree I don't blame the aforementioned wags, but I'm here to tell you there's nothing to gripe about in regard to the rendering of the Na'vi. In fact, once viewers get past the whole derivative thing, there's a hell of a lot to enjoy in AVATAR. Lemme break down what you need to know:
The bottom line on AVATAR is that I enjoyed it a great deal and will definitely see it again (on a decent NYC screen, as opposed to the piddling screen I saw it on in Norwalk, CT). Its content is best recommended for age ten and up because some of the sequences on Pandora can be pretty intense and possibly quite scary for younger viewers. The worst profanity on hand are a couple of uses of "shit" (your kids hear and, let's face it, say worse every day in school) and there is no sex/nudity, although there is a love scene from which one can infer that the beast with two backs will be made, but it's all in quite good taste. My personal litmus test for a film like this is whether or not I think my oft-mentioned and much-beloved niece, Cleo could take it, and I'm greatly saddened to note that she's not quite six yet, too young for a movie of this length and intensity. I know she'd totally dig the visuals and Neytiri (who definitely fits into a cooler-than-usual "princess" role since she's the daughter of the tribal leader and the shaman), so I hope AVATAR eventually gets a full-tilt re-release when she's old enough for me to share it with her on the big screen. And then I've got to sit her through SHOGUN ASSASSIN, SISTER STREET FIGHTER and THE LONG KISS GOODNIGHT, but those are also a long way off...
Posted by Bunche (pop culture ronin) at Tuesday, December 29, 2009

Agreed in most respects, although I felt that Weaver was off her usual level of excellence in this one.

The "unobtainium" thing is an inside joke. That phrase refers to the literary device of using some super-substance as a McGuffin. (aka, a plot device that has no intrinsic or defined value; Marcellus Wallace's briefcase in Pulp Fiction is a McGuffin.) Adamantium, mithril and carbonite are all examples of unobtainium. I suspect Cameron was trying to be clever here, but most people - even many geeks - didn't get the joke.

Oh, I got the joke alright, but never found it funny in the first place. I remember it from that stupid movie THE CORE and have run across it several times since, and all it ever elicited from me was a groan.

Glad to hear your take on Avatar... I just got home from seeing in Bridgeport and will definitely see it again! I love that the female characters are strong women and Neytiri is so active in the battles... reminded me a bit of Princess Mononoke. Masterful landscapes, great special effects and kickass performances all around. I actually didn’t get to see it in 3-D this time, so that’s the plan for next week!

BTW, I was curious about the silly name "unobtanium"... thanks for schooling me on the history.