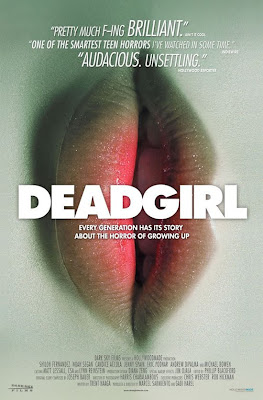 It’s finally October and only a few weeks until that most glorious of days, Halloween, and I intend to review as many horror movies as possible until then. So what better place to get the pumpkin rolling than with the incredibly dark, utterly sick and completely fucked-up DEADGIRL?

Initially wearing its indie/arthouse origins on its sleeve and getting off to a slightly slow start, DEADGIRL is the story of two high school-age friends, Rickie (Shiloh Fernandez) and JT (Noah Segan), both awkward losers, who, while ditching school, go to the local long-abandoned mental institution to drink warm beers and commit vandalism, and in its deepest tunnels they discover a beautiful naked woman (Jenny Spain), covered in plastic and chained to a medical gurney. The boys soon realize that the woman is undead (with no explanation given) and it’s a good bet that no one knows she’s there, so JT suggests they use the animate, bound corpse as their personal “fuck slut.” Conflicted but definitely not down with that plan, sensitive Rickie urges his friend to leave with him, but JT is a horny adolescent whose urges far outweigh any sense of morality or common decency, and he knows a good thing when he sees one. They have a falling out and from that point it’s clear that their friendship will never be the same, but they agree to keep the dead girl their little secret. But since when were teenagers any good at keeping secrets? Once the dead girl is no longer a commodity known solely to the two friends, things escalate into incredibly warped territory and offers up what may be the most disturbing coming of age story yet committed to celluloid.

Despite its obvious horrific elements, DEADGIRL is at its heart a realistic drama about the fears and disillusionment of adolescence, to say nothing of shedding light on the darker aspects of the young male psyche and how it can run rampant without supervision or guidance, providing a telling allegory about how some young men are raised to view and treat women. Rickie’s unrequited love for JoAnn (Candice Accola) is a heartbreaking plot point as he hopelessly pines for her, a wholesome and pretty girl who was his sweetheart during pre-pubescence but now won’t give him the time of day and dates a vicious jock. So on the one hand we have sleazy JT getting his hump on with a zombie that’s basically a piece of meat, there to serve as a receptacle for his seemingly endless supply of semen, while on the other we have Rickie’s exercise in romantic/emotional futility, and while those paths lead to a descent into grisly madness, the film is a strong examination of the agonizing teen years of the heterosexual male human condition. It’s all about the having of power or the complete lack thereof, and believe me when I say that it rings all too true.

Sick, dark, twisted, and highly morally questionable though it may be, DEADGIRL is an excellent piece of not-afraid-to-go-there cinema, and comes from out of nowhere to stand right next to the original DAWN OF THE DEAD as my favorite zombie movie. Not for all tastes and definitely not a date movie, this one is HIGHLY RECOMMENDED.
Posted by Bunche (pop culture ronin) at Thursday, October 01, 2009

I just moved it to the top of my Netflix Queue... Looking forward to seeing it!

Just saw it yesterday on my Avatar ROKU - it really disturbed me while watching it; a great flick and a really good zombie movie. One note to make, the Jock in the film reminded me of a co-worker from the Danbury Mint...I have to let him know about this movie - he'll love it! (he in no way is like the character - only looks like the guy) Thanks Steve for recommending this....

This was a VERY hard movie for me to watch, which seems to be the case for any woman who's seen this. I have to give Jenny Spain credit--any actress who can convincingly portray anguish, horror and rage without movement or facial expression is a good one. Along with "Schindler's List", "Deadgirl" goes on my "awesome movies that I never fucking want to see again" list.

That was a hard fucking movie to watch as a MAN. In fact, I had to watch it over two nights. I don't know if that means I'm too much in touch with my feminine side or too out of practice watching disturbing movies...