OFF TO THE BIG APPLE CON!

I'm off to the Big Apple Con from today through Sunday, blessed press pass at the ready, so I'll be running around like a maniac all weekend, eventually coming back with a full report early next week. Along with the con I'll have an especially busy Saturday, in which after the con I'm making my way to a friend's art show/auction on Staten Island, and after that I'll be heading to Manhattan's Upper East Side for another friend's fortieth birthday do, so I'll be one exhausted S.O.B. when all is said and done. If a window of opportunity permits, I may have time to review BLACK DYNAMITE (which I'm seeing this evening) and there is a Sunday porn post scheduled, so at least there'll be some sort of drivel to be had here.

My main goals at the con are to obtain autographed 8x10's of Nichelle Nichols, aka Lt. Uhura from the original STAR TREK series,
and Julie Newmar, the first and best Catwoman from the 1960's-era BATMAN, starring Adam West. 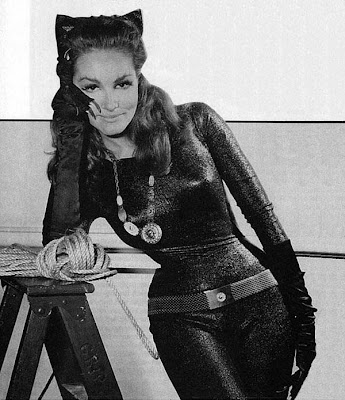 Both of these women have appealed to the geek in me since childhood, but perhaps more importantly they unknowingly helped turn me into the unrepentant horn dog that you know and love.

Most people remember that first TV or movie star upon whom they had their first crush, but I quite distinctly remember Julie Newmar awakening in me not puppy love, but outright lust. I was around five years old and was watching a BATMAN rerun in which the Caped Crusader was facing off against a curvy lady in a skin-tight black getup featuring a belt that couldn't help but to draw my undivided attention to her luscious hips, and topping off this vision was a pair of cat ears perched atop her sultry head. As the story progressed, I found myself paying virtually no attention to my cowl-adorned hero's adventure, instead finding myself fascinated by the leggy bombshell whose misdeeds he sought to thwart. Then came the moment when I felt undefinably odd and looked down to my lap, there to behold my pre-school-aged bacon bazooka in an unsettling, though by no means unpleasant, state of rigidity. I was very confused and asked aloud, "Why is my pee-pee standing up?" but no one was around to answer that question (thank god). All I knew was that my one-eyed milkman had that pleasant reaction while I was checking out Catwoman, and damned if that reaction didn't subsequently happen during every episode where she was played by Julie Newmar, and from there was born my lifelong interest in bad girls. My appreciation of the gorgeous though rather more cerebral charms of Nichelle Nichols didn't kick in until about three years later, but she and Newmar helped define what I liked in women, and for that I thank them profusely.

Anyway, I am outta here! Off to geek out like the natural born fanboy I am!
Posted by Bunche (pop culture ronin) at Friday, October 16, 2009

Right on, man. I can also remember being young enough to not quite understand what was so hypnotic about Newmar's hips in that sparkly black bodysuit. Very likely the first time I looked at a woman like that. That had to have ruined me on some level.

Have an AWESOME time :-)xx

They are definitely two amazing women. I'll be honored to breathe the same air (and hopefully not acquire con flu in the process).

I remember those 10- or 12-inch high Mego superhero/supervillain action figures, and in addition to the Spiderman and Iron Man and Batman and whatever, I had Catwoman and Batgirl. And since they had removable clothing, I would sometimes swap their outfits, and remember an intensely naughty feeling when those chicks were "naked" even though I was pretty ignorant about sex stuff at the time.

And yeah, Julie Newmar made me lust, too in that Catwoman suit. Her and Michelle Pfeiffer are the co-queens of rocking the Catwoman look and attitude, IMHO.