BLOOD, GORE, AND SO MUCH MORE: THE COLLECTED HOOK JAW VOL. 1 What's not to like about a mindlessly gory comics series featuring a gigantic Great White shark as the protagonist?

The British weekly boys comic ACTION (1976-1977) was a short-lived, balls-out-crazy attempt at cornering the lads' adventure market by ripping off the violent movies that kids wanted to see but were too young for proper admittance, and amping up the mayhem and gore to hilariously over-the-top levels. 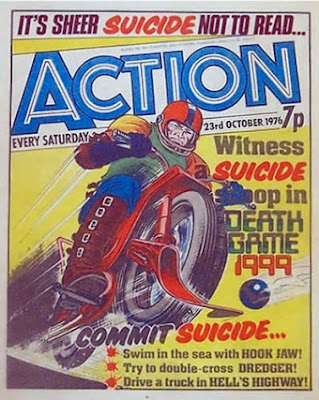 Spearheaded by the legendary (and still working) editor/writer Pat Mills, ACTION gave boys across the UK exactly the kind of testosterone-laden thrills craved by kids just a bit too young to have begun considering the merits of a covert grab of blossoming titty over those of playing soldiers in the back yard. My pals who grew up across the Pond reading this stuff when it came out hold a great fondness for it in their corrupted little hearts, citing such strips as DREDGER (a Dirty Harry swipe) and DEATH GAME 1999 (ROLLERBALL without a hint of restraint or good taste in the storytelling) as being more entertaining than a monkey with a fresh tube of K-Y jelly and a watermelon with a hole cut in it, but the magazine was killed by loud protests from parents and other defenders of public decency, the post-censorship neutered version sinking down the bowl faster than a hearty high-fiber turd, a sad fate for a magazine that ran the following blurb beneath one of its comics: "If ACTION doesn't make your hair stand on end — You must be bald!"

The history of ACTION is fascinating to say the least and can be found in more detail here, so I urge you to check that out. There was even an entire book written chronicling the rise and fall of the magazine — ACTION! THE STORY OF A VIOLENT COMIC (1990, Titan Books) — and from the ashes of ACTION arose the seminal sci-fi weekly 2000 AD, where Mills went on to co-create JUDGE DREDD and SLAINE, and wrote the excellent original run of THE A.B.C. WARRIORS and NEMESIS THE WARLOCK (with art by future LEAGUE OF EXTRAORDINARY GENTLEMEN illustrator Kevin O'Neill). But when it comes to his work on ACTION, one piece stands out, head and gore-splattered shoulders above the rest, namely HOOK JAW.

Mostly written by Ken Armstrong — an unsung genius/madman —with assists from Mills, HOOK JAW is, at its most basic, a flagrant JAWS ripoff, but with a twist that greatly appeals to the nine-year-old in me: the shark's the hero! In the first episode, an innocent Great White is just minding his own business, sharking about the Caribbean, when he runs afoul of a game fishing boat. When an obnoxious, probably American tourist tries to reel him in, a crewman shoves a gaffing hook through through his jaw, which promptly breaks off and remains sticking out of his face (a truly ridiculous visual — "What's badder than a Great White Shark? A Great White shark with a spear sticking out of his face!!!"), hence the name "Hook Jaw." Since he ain't havin' dat, the shark smashes into the boat, sending the fisherman into the drink, thus rendering him the very first in a loooooooong line of victims. The narrative then skips ahead by a year for no apparent reason, and we find ourselves at an oil rig in the middle of the ocean under the thumb of money-crazed boss Red McNally, a guy who uncaringly sacrifices his men in the name of black gold. Rick Mason, the only crew member to openly oppose McNally, constantly finds himself in the ocean facing the legion of Tiger sharks that use the area just below the rig as a mating ground, along with the near-sentient and sadistic Hook Jaw, who is also apparently about fifty feet long. The script comes at the reader fast and furious, sacrificing such unimportant narrative devices as characterization, logic, or even an actual story in favor of filling each chapter with copious amounts of graphic violence and much futile he-man posturing; macho histrionics are all well and good, but what the fuck good is that when you're facing what amounts to an enraged force of nature? 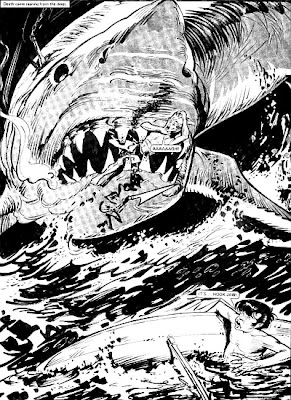 The average chapter features a minimum of setup, pretty much any excuse to get humans into the water so they can become tomorrow's shark shit, followed by the maximum amount of gore that could be gotten away with in a children's comic at the time (a move that not surprisingly lead to the magazine going tits-up just over a year after its launch); the carnage involves dismemberment and ingestion by the ravenous protagonist, an unfortunate diver literally blown to chunky bits by explosive decompression, a guy in a shark cage being nibbled to death by tiny, newborn Great Whites (Hook Jaw's kids, the spawn of a mate whose death of course spurs a murderous rampage of revenge), a blistering battle between Hookjaw and a giant squid in which a diver named Pat Mills gets a massive hole through his guts while the squid devours his innards, impalements on marlinspikes, a fire on the oil rig that forces much of the burning crew into the waiting mouths of dozens of sharks, a pre-JAWS 2 bit with a helicopter getting sunk by a Great White, and that's just the first twenty-two pages of a ninety-six page volume! Then a fucking hurricane comes from out of nowhere, just as an airliner suffers massive engine failure and crashes into the rig, taking out the derrick spout and landing in the water, providing an a la carte feast for the sharks, lead by Hook Jaw, who, in characteristic form, noses through the cockpit and eats the captain's head, just before devouring a stereotypical Jewish-American bank president (Herbert J. Rosenheim).

Oh, and let's not forget the second story; the setting shifts to the Gulf of Mexico one year after part one, and Mason is now employed as a "water sports expert" (no, not THAT kind of "water sports") at a holiday resort, and then Hook Jaw shows up, entering an allegedly impregnable lagoon and starts feasting on the tourists. Of course the asshole resort owner won't close the place for fear of losing business (gee, where have I heard that one before?), and then there are the local natives, a bunch of blacks who refer to Rick as — I shit you not — "Massa Rick" and conduct a voodoo ritual to banish the shark menace... After reading certain parts of this story I am absolutely convinced that the makers of JAWS 3-D read HOOK JAW and ripped it off, an amusing ripoff of a ripoff, so I guess it all evens out on a cosmic scale.

If all that sounds exhausting, it is, but I haven't laughed so hard in quite some time, and I'm only fifty-one pages into the fucking thing! I'll finish it on my subway ride home this evening, but I will already recommend it without hesitation to those who love sheer ludicrousity on a grand scale. It's grubby, sleazy, drawn with exploitative gusto by Ramon Sola (who looks like he's having the time of his life), and is the definite spiritual ancestor to early 2000 AD's killer polar bear saga SHAKO!, which I reviewed a few months ago. Seriously, no other Two-Thou strip wore its ACTION influence on its sleeve like SHAKO! did, and that's too bad because the simple fact of the matter is that over-the-top violence and mayhem can be extremely entertaining if handled correctly. In fact, HOOK JAW would make for a breathless feature film thriller and probably rake in mountains of cash if any studio would have the stones to really go there with the material, namely keeping it as stupid as it is and not ruining it with an actual plot or a romantic interest; this is an ultra-violent tale of man versus sea-monsters, no more, no less, and it just cries out for a big screen adaptation. And I know there are those of you out there who hated DEEP BLUE SEA, which was kind of the same thing, but you can go fuck yourselves. You douchebags probably liked that BLAIR WITCH PROJECT bullshit.

My only real complaint about the HOOK JAW collection is the dinkiness of the overall package; for something that's been in production for at least two years, the book has a no-frills, black cover design (SEE BELOW) that almost caused me to gloss over it on the new comics rack at Manhattan's Midtown Comics, and a total lack of any kind of introductory material that places the strip in historical context or gives any background on ACTION and the controversy that surrounded it. Nonetheless, it's a hell of lot of fun and should be thrust into the hands of any pre-teen in need of corruption. Hey, I started out on the nudity-and-gore-laden CREEPY and EERIE when I was still in the single digits, and look how I turned out. Okay, bad example since those comics weren't aimed at kids, but HOOK JAW was, and that's a beautiful thing. 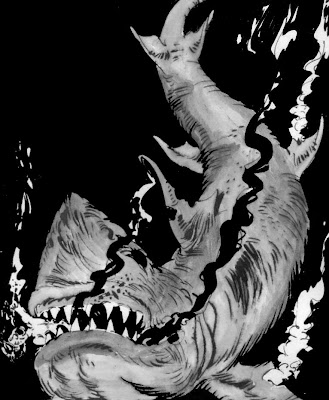 You gotta love any comic that exhorts its readers to "commit suicide" . That is just TOO funny!