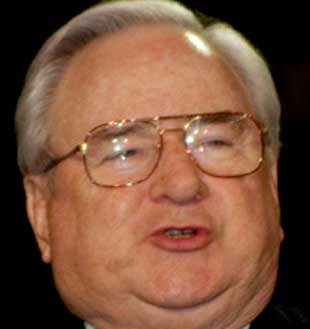 During my time in the Marvel Comics Bullpen I had the pleasure of working alongside several Born Again Christians, and had many of my deep-rooted prejudices against them and their faith shattered by seeing the ones I worked with as excellent human beings who didn't bother others with their convictions and put forth a genuine love of their fellow man. I had hated Born Agains and fundamentalists since my tween years, and now the main cause of that blind distaste lies deader than the box office take for FROM JUSTIN TO KELLEY. Yes, Jerry Falwell, one of the founders of the so-called "Moral Majority" finally had the simple common decency to die, thus becoming no longer able to utter such gems as this statement made on the Christian television show THE 700 CLUB regarding the tragedy of 9/11:

"I really believe that the pagans, and the abortionists, and the feminists, and the gays and the lesbians who are actively trying to make that an alternative lifestyle, the ACLU, People For the American Way, all of them who have tried to secularize America. I point the finger in their face and say 'you helped this happen."

And when that monolith of stupidity naturally blew up in his face, he responded in a phone call to CNN with:

"I would never blame any human being except the terrorists, and if I left that impression with gays or lesbians or anyone else, I apologize."

"Left that impression?" Motherfucker, you cited several groups and organizations by name, so that shit wasn't left to the imagination, it was premeditated. And that's just a nugget from the mountain of horsehit to spew from Falwell's poisonous mind over the decades.

A denouncer of Martin Luther King, Jr. and the civil rights movement, as well as being a vocal supporter of apartheid and an all-around colossal asshole, I genuinely hope that if Hell exists Falwell is being ass-fucked by a Satanic Rottweiler with glowing red eyes and a two-foot flaming penis. But enough of my petty fantasies, the last word shall go to the Dead Kennedys with an excerpt from their song "Moral Majority" (1981):

When I heard the news, I swear, the very first thing that ran thru my mind was the Klaus Nomi version of Ding Dong The Witch is Dead.

Now he's gotta' meet MY maker. I hope that works out for him.
Personally, I think he's gettin' ass raped and left on the street side of the Pearly Gates, but hey; Ye reap what ye sow eh?