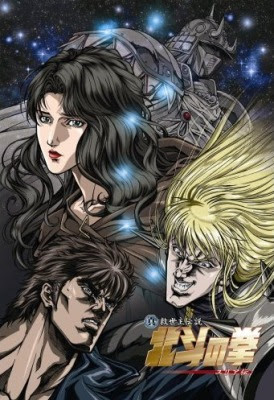 Anyone who's ever seen FIST OF THE NORTH STAR in any of its incarnations will tell you that the female characters were pretty much there solely to be rescued or serve as sacrificial lambs at the hands of rapists and garden variety murderers, so this made-for-DVD place holder (until the next theatrical feature) beefs up the role of Yuria — rechristened "Julia" in the English version, presumably to distance her name from sounding like a urinary reference — the unintentional catalyst to the odyssey of killing that passes as a story, and adds further details to her covert role as the last general of the Southern Cross Fist (if you aren't well-versed in this series, don't ask; it's a looooong story). However, while admirably fleshing out Yuria's role the writers have rendered much of the mystery and surprise of the tale's events moot by having her serve as a behind the scenes manipulator whose actions create a whole new level of pointless retroactive continuity.

This is FIST OF THE NORTH STAR as chick flick, two terms that should never be in the same sentence for any reason, and as a result much of the insane fighting, violence and showering gore is absent, attempting to make the viewer feel guilty for enjoying the carnage that they wanted to see in the first place, and while not boring this is not what a fan of the series would want. And for those who know this stuff, this DVD recounts hero Kenshiro's origin, bits of the Rei storyline, and sets the stage for the next film, Toki's heartbreaking battle with the ruthless Raoh. Now, that's a film I want to see!