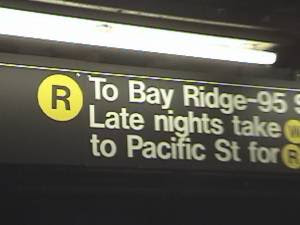 Yesterday morning's encounter with Harvell — the Street News hawker whose son is "going to school at Berkely...for Jazz!!!" — was stranger than usual. I boarded the Times Square/Grand Central shuttle and saw Harvell, a sight that immediately engenders a sense of foreboding in me every morning, but this time he was wildly off-script. Rather than asking for money he instead harangued all Caucasian commuters within his field of vision with loud exclamations such as, "Gaw-DAMN! You's a WHITE muthafukka if evah I seen one! So bright in here I'm gonna go snow-blind! SHEEEEEEE-IT!!!" and "Don't think y'all have ol' Harvell fooled... I KNOW y'all never abolished slavery! Think I don't know nothin'..." When the less-than-two-minute journey ended, Harvell staggered out of the train, stopped next to the driver's window, stuck his head in and yelled, "I THOUGHT I seen me a White man!"

When my day ended I took a seat on the R train to Brooklyn, ready to immerse myself in the latest issue of JUSTICE LEAGUE — any comic book that brings back Dawnstar, one of the most visually spectacular members of the post-Jim Shooter Legion of Super-Heroes, has my love — when a prim thirty-something walked into the car and announced that she and her husband were homeless and in need of donations. If you ride the subway every day as I pretty much have for the last seventeen years, you get to know the regular cast of panhandlers, their gimmicks, and their scams; this woman has patrolled the N and R line for at least seven years, always looking fresh as a daisy and sometimes accompanied by her husband, a pasty bastard who whinges on about how his leg was broken but thanks to no health insurance he couldn't get it set properly and now has a limp. People who've never seen him before feel bad for him and give him cash, but those of us who've seen him a million times know he's a lying sack of shit because on one day his bad leg will be the left one, and on another it will be the right. Last night's train must have been full of longtime riders, because the lady in question did not receive one red cent.

A few stops later an enormous Black guy wobble-bottomed his way onto the train, his too-small t-shirt spattered with grease stains and what appeared to be the telltale crumbs of Popeye's Fried Chicken. The three-hundred-and-fifty-pounder made a feeble appeal for cash with the most marble-mouthed enunciation imaginable, and at the mere sound of the guy's words I could picture my eighth grade English teacher weeping into her hands. Not surprisingly, our lad was given the silent brush-off by the passengers, proving that if you're going to beg for food, at least have the decency to look like you haven't eaten in a while, for fuck's sake!

Then came an obviously heroin-addicted doo-wop trio who proceeded to mangle the Willows' 1956 classic "Church Bells May Ring" — one of my ten all-time favorite songs, FYI, and you can hear it at http://www.emusic.com/album/10875/10875837.html?fref=150051 — and as I tried not to laugh the rest of the car almost fell out of their seats at the unintentional (?) hilarity and hooked the junkies up with enough scratch to pay for their next armfull of China White. Hey, man, I don't care how fucked up you are, but if you're gonna ask me for money you had fucking well better entertain me, and those desecrators of the Willows' legacy certainly made me smile.
Posted by Bunche (pop culture ronin) at Friday, May 25, 2007