OF RATS AND RESTAURANTS 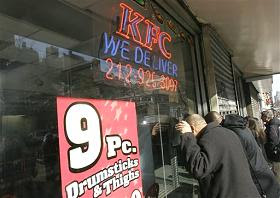 In a story you may have seen, back at the end of February a Taco Bell/KFC on Manhattan's lower West Side was overrun at night by a legion of rather large rats, a squirm-inducing sight captured for posterity by local news crews that soon gained nationwide infamy thanks to saturation TV airings. Gawkers plastered themselves in front of the place, cameras at the ready, capturing the WILLARD-like scenario in all its verminous detail, and the vermin in question were so bold that they didn't flee from the bright lights and humans, in fact, quite the opposite; they frolicked and cavorted with gay, rodential abandon, playing on the chairs and even coming up to the eatery's front window, placing their little paws against the glass and peering at the urban documentarians as if to ask, "What the fuck are YOU?"

The interesting thing about all of this was while it may have been potentially nauseating concrete evidence of the health department's shoddy services, most of the New Yorkers I know — myself included — were not really disgusted by the infestation, but were instead rather amused by the charming, even cute, antics of the little critters. When I was still at the barbecue joint and the spot ran every half hour on New York 1 News, the staff and the regulars would delightedly scream, "Yay, rats!" whenever the footage aired, laughing out loud at the elephant nuts exhibited by these proud rats, proving themselves to be just as "fuck you" obnoxious as the two-legged giants who inhabit the Big Apple's walking space outside of the shadows.


Not the "cute" footage from NY1 News.

But what cracked me up the most about the whole incident was when I first saw the story on the news and I instantly recognized the location. For years, whenever I was in that neighborhood, usually on a shopping trip to the superlative Generation Records, I would stop at that Taco Bell/KFC for a round of hard-shelled tacos and a fruit punch, fully aware of how obviously unclean the place was but taking it in stride because this was, after all, New York City. And along with the sleazy atmosphere of the joint, the customers were a rather scurvy lot — having grown up mere blocks away, my friends Jennifer and Nicole could tell you stories about the local denizens — and my favorite encounter with them has to be the time I tried to eat my lunch while an unattentive mother allowed her five-year-old to rampage unchecked, and he sat down in the empty chair across from me and began bashing his plush Batman toy against my tray, nearly showering my meal all over the floor. His bored mother eventually looked up but did not tell him to leave me alone. Eventually, the kid gave up after I steadfastly ignored him.

Anyway, this morning's newscast announced that the Taco Bell/KFC in question has been closed for good, rather than just for the time necessary to clean the place and fortify it against future vermin incursions. Now what will I do for my lower West Side Taco Bell fix? Man, this city is going straight to Hell... 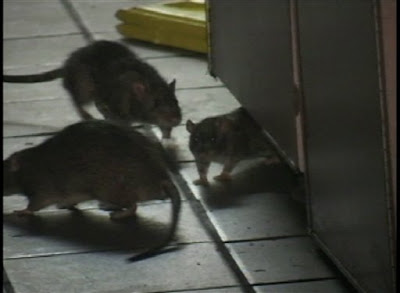 forget taco bell... ya want rats... check out mcdonalds on W. 3rd in the early am! lordy! Bunche, if you miss the rats, you can always go there!

"Eventually, the kid gave up after I steadfastly ignored him."

Perhaps a better strategy would've been to feed the little monster and his ignorant mother to those rats.

I find that I can usually fix my RAT FIXX by peering into the bushes at any charming "park" - those are not squirrels and birdies rustling, my dear...