IT'S A BLACK THING 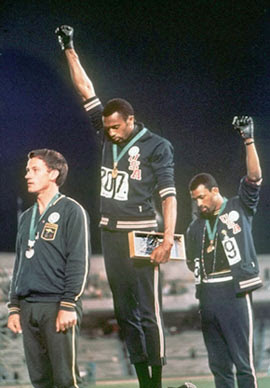 This morning I received an email from an old friend who I've known since she was in the single digits and I was her camp counselor. Back in those days we bonded because we were both misfits stuck in the hypocritical stewpot of intolerance that was Westport, Connecticut, me embodying the unholy terror of the articulate Black man who wasn't a butler or a lawn jockey, and she being very obviously on the road to being a full-blown lesbian (yes, you can tell such things if you bother to actually communicate with kids, especially as they approach adolescence). While the majority of the other counselors — to say nothing of the other kids — made her life miserable for being "different", and in some cases actually campaigned to "turn her from that path," I took her under my wing and encouraged her interest in new wave and punk music (she idolized Belinda Carlisle and the Go-Gos) while also fueling her budding comic book fan-geekery.

Perhaps the crowning moment of our association was when her mom, in 1989, permitted me to take her to see what was billed as the Damned's farewell tour (yeah, right) at the Ritz in Manhattan, and she was only twelve years old. A six-foot twelve-year-old who looked considerably older and carried herself with a maturity beyond her years, but still a twelve-year-old nonetheless. We went, with another of my friends in tow, and before we hit the show we stopped off at my favorite pub of all time, the now defunct Downtown Beirut, and when we sat down at the bar, my underage charge was the first to be offered a drink by the bartender (no, I didn't let her drink). And at the Damned show she got to see a terrific performance, and guitarist Captain Sensible finished the show wearing naught but hat, shoes and shades, his uncut British dork flopping about in all its glory. The kid had a great time, witnessed rock 'n' roll history, and had a story to tell the kids in junior high that I guarantee none of them would have experienced. No bullshit, I couldn't have asked for a cooler little sister if she were my own flesh and blood (sorry, Meredith, but I only just met you again a couple of months ago and we still have to get to know each other).

But enough with the backstory; the email I got from the now-grown camper read as follows:

OK, i got in trouble at work today because i said someone was "black"..., your thoughts????

Was the person in question black? And exactly what was the context in which you got in trouble for saying "black?" Speaking as a qualified negro, I say there's nothing wrong with the term, and I seriously doubt you said something like "Get off your lazy black ass and fry me some chicken."

The problem is the ever-escalating stupidity of political correctness enabling unneccessary changes in the terminology for any given ethnic/special interest group. Within my just over four decades on this planet I have seen my classification mutate no less than four times; when us highly rhythmic individuals were first "imported" to this country we were referred to as niggers/coons/jigaboos/etc., all unacceptable even under the best of situations. Then, after slavery was for some obscure reason abolished, we became "negroes," a term that rankles me personally because it was usually found in conjunction with such phrases as "My, what a well-spoken negro!" (If I had a dime for every time I heard that one since my family moved to Connecticut in 1972...) I use "negro" in conversation and writing solely for comedic effect and to point out just how quaint and antiquated it sounds.

A few decades later the Civil Rights movement happened and we upped the toughness factor by embracing "black"; let's face it, "black" sounds much better than negro because it not only serves as a proud marker of hue, it's also not a place-marker of ethnicity/genetics. But then the Black Pride thing went out of control and morphed "black" into "Afro-American," which, to me anyway, sounds like an ethnic group composed solely of large, spheroid follicles. Fortunately, most black people thought that sounded stupid and "black" was swiftly reinstated.

Then the Eighties happened — my vote for the worst decade in human history — and political correctness reared its ugly head, rendering terms that had been in common parlance for fuck knows how long into bland sound bytes designed so as to offend absolutely no one. Thus, "black" morphed into African-American, and that one pisses me off because while some of my ancestry came from Africa, my beige ass was born here, so I'm fucking American. Period. My own culture has nothing whatsoever to do with that of actual Africans, and I think that term helps to unwelcomely homogenize two disparate groups of the melanin-gifted, to say nothing of insulting Africans who have a genuine, indigenous culture, relatively free of outside (read "Whitey") influences, that has been around for thousands, THOUSANDS of years.

So, no, you are in no way wrong for using the term "black," and I urge you to print out this email and wave it in the face of the over-sensitive person who was needlessly offended and allow them to read the following advice from a person who proudly calls himself Black: Get over yourself, and butch the fuck up, for fuck's sake.

Anybody have anything to add to this, especially my fellow blacks?
Posted by Bunche (pop culture ronin) at Thursday, May 24, 2007

Labels: THE FINE ART OF NEGROLICIOUSNESS

I admit it: I'm black. And one of the main reasons is because I am too lazy to type out "African-American" every time I want to do a quick description of myself. It's as accurate, and inaccurate, as most other descriptors.

I'm not black (yeah I said it) I'm puertorican! and I hate it when people ask me "what do you people like to be called? Latino? hispanic?" What the hell does THAT mean? Personally I like to be called by my name, Harry!

"African-American" is a flippin' ridiculous, overly-long word that has ceased to have any real meaning. The kids I teach don't even understand what it really means half the time. For example, when I was teaching _Othello_ to my 10th graders, many would write essays describing the situation as an "interracial marriage between a white woman and an African-American man." Excuse me?? *rolls eyes* It's a stupid phrase...but then again, I'm pigmentally-challenged, so many would say I'm not qualified to weigh in on the issue.

I also loathe the political correctness juggernaut that (like so many things) began with good intentions and quickly grew stupid.

Even so, I employ the term Native American rather than Indian, partly because there are plenty of Indians around here from, well India, partly because it emphasizes the AMERICAN part that so many fucking dimwit rednecks keep forgetting, and partly because I hate referring to a people by the title bestowed on them by a geogrpahically-challenged Italian. :)

Well, Steve, after reading your post I must say....
You certainly are a very well spoken negro.