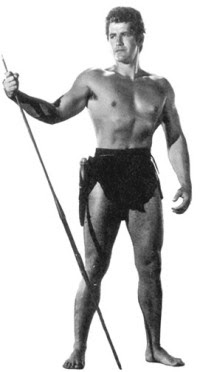 Another of my chldhood heroes went tits up recently, namely Gordon Scott, probably the second best Tarzan ever (after Johnny Weismuller). His Tarzan was articulate as opposed to Weismuller's monosyllabic jungle spirit/unadulterated essence of Maleness with a capital M, was impressively fit in that mid-1950's homoerotic muscleman kind of way (think Steve Reeves in HERCULES and HERCULES UNCHAINED for reference), and even starred against pre-Bond heavy Sean Connery in TARZAN'S GREATEST ADVENTURE (1959). But for me Scott will always be most fondly remembered as Maciste — rechristened Goliath for the US market — in the most entertaining film of the Italian peplum boom, GOLIATH AND THE VAMPIRES (1961) which even featured Christopher Lee as the vampire lord Kobrak. 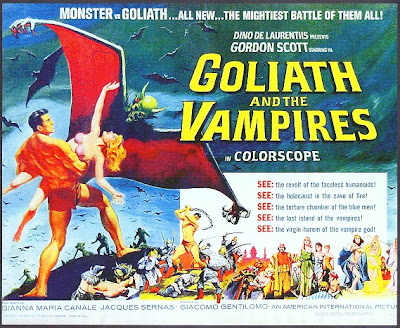 From the New York Times:

Gordon Scott, 80, Dies; Film Actor Best Known for Playing Tarzan
BALTIMORE, May 4 (AP) — Gordon Scott, a handsome, muscular actor who portrayed Tarzan in the 1950s, died here on Monday. He was 80. The cause was complications after heart surgery, said a spokesman for Johns Hopkins Hospital.

Mr. Scott was one in a long line of actors, including Johnny Weissmuller and Buster Crabbe, who portrayed Tarzan, the vine-swinging hero of the jungle created by the writer Edgar Rice Burroughs. Among his movies were “Tarzan and the Lost Safari” (1957), “Tarzan’s Fight for Life” (1958), “Tarzan and the Trappers” (1958), “Tarzan’s Greatest Adventure” (1959) and “Tarzan the Magnificent” (1960). “He was an absolutely wonderful Tarzan who played the character as an intelligent and nice man who carried himself well, much as my grandfather had originally written it,” Mr. Burroughs’s grandson Danton Burroughs told The Baltimore Sun.

Mr. Scott was born Gordon W. Werschkul in Portland, Ore., on Aug. 3, 1926. He was a lifeguard at the Sahara Hotel in Las Vegas when he was discovered by the Hollywood producer Sol Lesser, said his brother, Rafield Werschkul. He was chosen over 200 other candidates to play Tarzan and signed to a seven-year contract.
During the production of his first film, “Tarzan’s Hidden Jungle,” in 1954, he fell in love with his co-star, Vera Miles. The couple married that year and divorced four years later. In addition to his brother, of Portland, his survivors include two sisters, Janice McKeel of Salem, Ore., and Betty Lou Hyatt of Sisters, Ore.

After the Tarzan movies, Mr. Scott appeared in westerns and gladiator films. His later years were spent in Baltimore, in a row house owned by Roger and Betty Thomas. “My husband has been a fan of his since he was a child,” Betty Thomas said. “When we were in Hollywood about eight years ago, we looked him up. We invited him for a visit. He came and never left.”

An obituary by The Associated Press on Saturday about Gordon Scott, an actor who played Tarzan in the 1950s, misspelled his surname at birth. He was Gordon W. Werschkul, not Werschkull. The obituary also misspelled the given name of his surviving brother. He is Rafield Werschkul, not Rayfield. 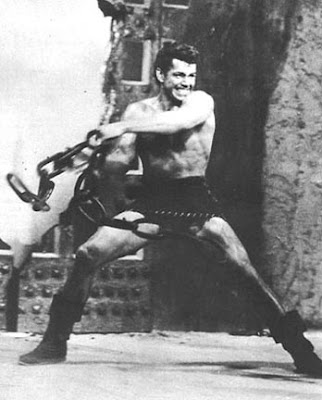 Man, that Goliath was one bad muthafukka. Bring back the mythological muscleman epic! NOW!!!
Posted by Bunche (pop culture ronin) at Thursday, May 10, 2007

Ah, Dino de Laurentiis. Why am I not surprised?

Don't you wish the movies with those lurid-ass posters actually delivered on the cool stuff they promised? :)

Believe it or not, for its time GOLIATH AND THE VAMPIRES did deliver, and then some! If remade today with more violence, nudity, and monsters it would be the perfect R-rated confection.

Gordon Scott was a lot better than Johnny W., in my humble opinion. He was much more fun and exciting.

JW always looked persecuted or paranoid in his Tarzan movies.

Sad that GS died without any family that cared about him. He was basically picked up by a dedicated fan. Good karma for the fan.

None of his five kids was ever interested in their dad. There is a lot more to his story, but I guess it does not matter?