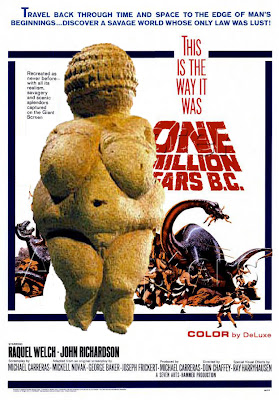 I like my wimmerns with some flesh on 'em. Full figured, "Thick." Curvaceous. "Built for comfort." And apparently so did our ancestors who took down Mastadons for dinner.

Big was beautiful in Palaeolithic times, say archaeologists who have found carved voluptuous figurines made from flint.

Prehistoric men 15,000 years ago preferred full-figured women, suggest dozens of flint figurines excavated from a Palaeolithic hunting site in Poland. As almost identical depictions have been found elsewhere throughout Europe, the figurines indicate a shared artistic tradition even then. The findings are published in the current issue of THE JOURNAL OF ANTIQUITY. Co-author Professor Romuald Schild, from the Institute of Archaeology and Ethnology at the Polish Academy of Sciences, says the artefacts offers "a cultural inventory" for the late Magdalenian era, 18,000-10,000 years ago. In the paper, Schild and colleagues describe the carvings as "stylised voluptuous female outlines" that "are cut out of flint flakes". The same symbolic representations of women displayed in the artefacts extend across Europe, adds Schild.

Because the site, near the Polish village of Wilczyce, served as a late autumn/early winter hunting camp, it is likely men created the figurines when they were taking breaks from hunting arctic foxes, woolly rhinoceroses and other game. Most of the carvings show a slight curve in the breast area. Very exaggerated curves depict the buttocks, while tiny rounded tops served as heads. One figure's head was, at one point, polished and retouched. Examination of the flint artefacts under high magnification revealed they were in mint condition with no signs of use as tools.

The book THE NATURE OF PALEOLITHIC ART by R Dale Guthrie, an emeritus professor in the Institute of Arctic Biology at the University of Alaska, Fairbanks, contains images of nearly identical renderings.

It seems shapely women also inspired stone carvings and cave art, some of which date to 35,000 years ago. Among the human depictions, "female images dominate and are nude, almost every one full-figured above and below", says Guthrie. He believes most of their creators were young men. He suggests it is not too difficult to theorise what was on their minds in their free time. "Think of it, Palaeolithic people must have been surrounded by a wealth of other available images," he says.

"For example, the [art subject] repetition could have involved: babies, butterflies, frogs, song birds, small mammals, flowers, beautiful clothes, battle scenes, shields, clan symbols and so on. These are absent or virtually unknown in Palaeolithic art."

a surpisingly uniformed academic article and totally misconstrued artifact. The voluptuous idols are a reflection of a goddess belief system, probably astronomical in origin, most likely neanderthal rather than homo sapien.

first of all, most people reading that article — on this site anyway — already know what's up with the goddess aspect of the subject. The only reason I posted it was to have a sensational headline to provide an excuse for running one of my signature bad photoshop collages, this time replacing Raquel Welch with Ms. Willendorf.

I read somewhere that big is usually considered beautiful during times of food scarcity. If nobody has enough food to get fat, then being fat becomes a sign of wealth and privilege. Since we have the opposite problem and most of us can't stay thin, the mass culture tends to see thin as the ideal.

Larz needs to bury his face in some big boobies and make motorcycle noises before he posts again. Put the book down, Larz, and LIVE, boy! LIVE!

I know the previous comment-leaver, and all I have to say is you should see her boobies. Mesmerizing, though I haven't seen them unclothed.