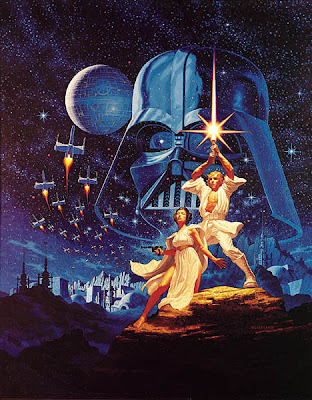 Wanna feel old? Would you believe that today is the thirtieth — yes, you read that right — anniversary of the original STAR WARS?

Yes, the cinematic landmark that would later be prefaced as EPISODE IV: A NEW HOPE (which, contrary to popular belief, was not part of the original title) has reached three decades of influencing pop culture, setting the stylistic look of space adventure film and TV, and ensuring that legions of Jedi Knight costume-wearing fanboys will never, ever see a trace of pussy.

No, I won't go on to rant about how there hasn't been a good STAR WARS flick since the splendid THE EMPIRE STRIKES BACK (1980), nor will I call for the public execution of George Lucas for fucking his own syncretic mythos in the ass ("Midi-Chlorians?" Nigga, puh-leeze!) and therefore also giving untold millions of fans the equivalent of a prison shower beat-down and subsequent deep-dicking with a freeze-dried iguana. No, this day is for appreciating one of the most entertaining films ever made, truly the modernization of the old FLASH GORDON style of space-heroics, stuff that has no relation whatsoever to actual science but is brimful of daring-do, swashbuckling, swordfights, noisy spacecraft, and scads of bizarre B.E.M.'s, all there to delight children and the child who still dwells within bitter, supposedly grown-up fucks like yours truly. Me, I'll be watching STAR WARS after work on DVD with Jessica — no, unfortunately she's not my girlfriend — as we kick back with Chinese food, brewskis, Jose Quervo, and some kind of questionable plant that somehow ended up in a wafer-thin rolling paper, and depending on how much we tap into the Force we may also do EMPIRE. (Hell, I'd rather do EMPIRE in the first place, but today's about the original, and I'm a purist when it comes to respect)

So break out your plastic lightsabers, duct tape an onion bagel to each temple and dance like a maniac to the musical stylings of the Mos Eisley Cantina band (not those Max Rebo fifth-rate Muppet fuck-sticks from RETURN OF THE JEDI). STAR WARS still holds its own against theoretically-better or more technically advanced films in its genre, and unarguably out-entertains all that have followed in its wake (THE EMPIRE STRIKES BACK excluded). I'll take my spaceships as dirt-encrusted models over the latest CGI-crafted star-buggy, thank you very much, so Happy Anniversary to STAR WARS, and may the...OOOOOOOH, it's too geeky for me to even write it!!! 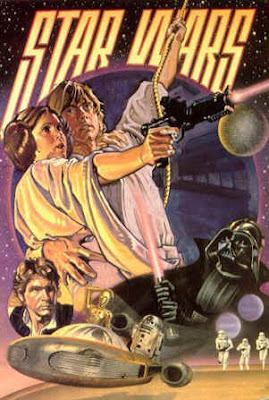 What I think is really cool is that my 9-year old is just as into it as I was and has more tie-in products than I ever dreamed of: Star Wars LEGOs (making everything from AT ATs to Jabba's Sail Barge; Darth Maul lightsabers; the LEGO Star Wars video games (two of the best, most addictive games I've ever played) and other Star Wars titles; the Darth Vader helmet with voice synthesizer; Star Wars Pez dispensers (including the Death Star); even a Playskool Millennium Falcon (that I bought him when he was 4).

may the force be with you kitten -Jes

I re-watched the original last December at my mom's place, and I'm amazed by how well it still stands up. It's not just an nostalgia trip - the movie remains well-paced, exciting, and just cheesy enough to be fun.

The only parts that sucked were the CGI "improvements" Lucas added later, which seem even more jar(jar?)ing on a TV screen where the dot-matrix pattern reveals the unreal look of on-film CGI even more blatantly than usual.