THE MOST OFFENSIVE SITCOM OF THE PAST FIVE DECADES: MyNetwork's UNDER ONE ROOF

How does one reconcile the simultaneous feelings of being appalled and fascinated? I honestly do not know, and thanks to an accident of channel-surfing I must now ponder that question.

Have any of you you out there heard of the new sitcom UNDER ONE ROOF? I hadn't heard word one about it, but I came across it while flipping around the channels last night and was horrified by what I witnessed. At first it looked like just another of the terrible "black" shows vomited onto the airwaves by the MyNetwork — formerly the UPN, so that should give you a clue as to what kind of programming I'm bitching about — but as I watched, a mind-altering tableux unfolded within the stale framework of a "fish out of water" comedy along the lines of WHO'S THE BOSS?, THE FRESH PRINCE OF BEL-AIRE or THE BEVERLY HILLBILLIES. In the space of one half hour I beheld a parade of ethnic stereotypes so egregious that it made me wonder if I'd fallen into an alternate universe where they still allowed this kind of pre-1960's minstrelsy to flourish, and had somehow found a away to resurrect Stepin Fetchit in the form of Flavor Flav. 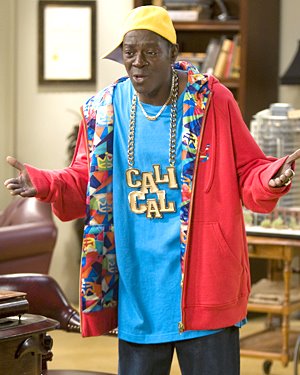 Flavor Flav: not Stepin Fetchit, but an amazing simulation.

Mister Flav plays Calvester Hill, a cartoonish, over-the-top hip-hop caricature who has recently gotten out of jail after taking the rap to prevent his "good" younger brother from ruining his much more promising life after crashing his car. Once out, Calvester calls in the favor owed him by his brother — who is now a bourgie real estate gazillionaire with a white wife — and promptly moves into his bro's mansion, thereby bringing his streetwise ways and sensibilities into conflict with what is perceived as his brother's disconnect from his own "blackness," as well as opening the door to his thuggish pals and former fellow prison inmates. In the first episode, Calvester must fend off the unwanted presence of "Pumpkin" (Tiny "Zeus" Lister), a hulking violent offender who protected Calvester during his days behind bars, who now seeks payback in the form of post-incarceration prison-style man-on-man lovin'. Yes, you read that right: a sitcom that seeks to wring laughs from a gargantuan black man set on ass-raping his former cellmate, and said former cellmate's outlandish efforts to avoid being sundered by a huge, throbbing wedge of ebony soul pole.

That setup is bad enough, but the icing on the cake is the parade of broad ethnic cliches. The black people present are either "buppies" or hip-hop "playas" and blaxploitation stock characters, complete with pimp walks, gold chains, and flamboyant threads, and as for the other races about the only offensive stereotype not present was a Jew with a gigantic hook-nose and Smith Brothers beard who controls all aspects of the media and lusts after hot, blonde shiksas. But the true standout here is the Chinese cook (Emily Kuroda) who yammers in embarrassing pidgin English and sports fashions seemingly designed by Mao Tse-Tung. I know she's an actor and is looking to earn some cash, but this isn't the way to do that and maintain one's dignity. And as I predicted nearly twenty years ago, without Public Enemy and Chuck D, Flavor Flav has degenerated into the living embodiment of the classic minstrel show coon.

But, you may ask, is any of this funny? The answer to that is an unequivocal "no." I'm not alone in my assessment, as can be found in articles from the LA Times and Courant.com that for some reason I can't establish links to. But that's no big deal; just Google Under One Roof MyNetwork and search for yourself. Read the reviews at the aforementioned spots and you will know all you need to know. As for me, I plan to regularly tape this atrocity, just so I'll have it for posterity; no one believes me when I tell them about HOMEBOYS IN OUTER SPACE (1996-1997), a show I wish I'd taped just to prove how extra-stupid it was, and I won't make that mistake twice. 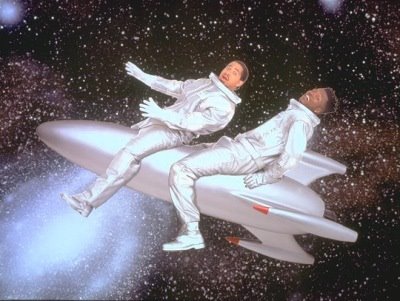 Wow. Sounds like someone at MyNetwork watched Spike Lee's "Bamboozled" and missed the point of it. Clearly, Spike was more on target than he would have liked to have been.

I thought Mr.Flav was mildly amusing on Surreal Life. Then he did that show with the amazonic Brigitte Nielsen and it proved diverting (in a "theres nothing else on" kind of way).

Now, between Flavor of Love and this show (neither of which I have seen), it seems like Mr. Flav has started wearing out his welcome.

Mr. Flav's limited talents might be put to better use...as a celebrity commentator on one of those "I Love the.." decade shows on VH1. He's much better taken in limited doses.

Sooooooo... this is "racial pride" in WHOSE lexicon?