THREE TREASURES FROM THE COMICON

Over the course of the weekend I finally got to meet one of the finest illustrators working in the comics biz and one of my top three favorite cartoonists of all time, namely Steve "the Dude" Rude, co-creator of the excellent Nexus, and commissioned this terrific sketch of Jewish extraterrestrial "independent adjudicator," superhero, all around fun guy and bon vivante , Judah "The Hammer" Maccabee. Adopted by kindly intergalactic rabbis when he was presumed orphaned during his planet's enslavement, the young Fred took to the Jewish faith and was renamed Judah, eventually hoping to follow in his rescuers' line of work with a career as a rabbi. But while it's okay to be a goy, you have to be a human goy, so Judah instead became a righteous badass who emulated his idol Nexus' mission to wipe out genocidal oppressors wherever he finds them. Nexus is overflowing with memorable characters, but it's Judah who holds the warmest place in my heart, and I can't thank Rude enough for doing the illustration. 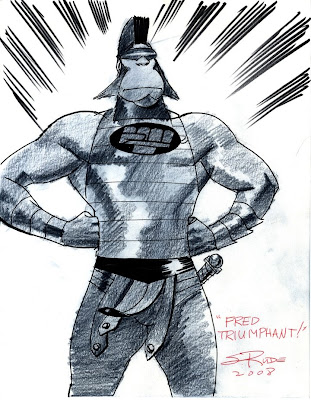 "Fred Triumphant!" by the one and only Steve Rude.

As many of you who read my drivel know, I'm a huge fan of Britain's 2000 AD sci-fi comics weekly, especially the pre-1990's stuff, and few strips that ran there are as high in my estimation as the (way too) long-running Slaine, the thinking-man's answer to Conan the Barbarian, only featuring considerably more levity, scribed by Two-Thou linchpin Pat Mills. It's loads of fun, but Slaine suffers from a case of never having a consistent art team for too long, coupled with the fact that it has gone on forever, for no good reason and to dimisihing returns and interest. To the layman, I would advise that you stop reading the series just after Simon Bisley's okay but vastly overrated "Horned God" arc that moved the series into the tired visual arena created by Heavy Metal back in the late 1970's. In my humble opinion Slaine has had exactly two truly great runs on its art, namely those of Judge Dredd stalwart Mike McMahon and Glenn Fabry, best known in the States for his cover's adorning Vertigo's Preacher. Glenn and I worked together on the tail-end of Outlaw Nation, and I found him to be as terrific and fun of a person as his art, and have had the honor of surviving a couple of nights out on the town with him. 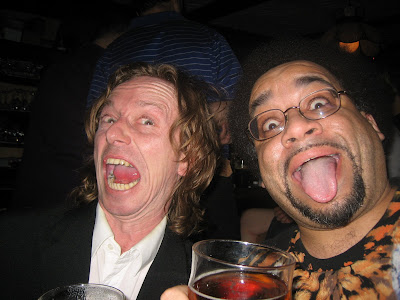 Glenn Fabry and Yer Bunche, at Jesus O'clock in the morning three days ago.
Many of the UK contingent of comics folk have a well-deserved rep when it comes to their Herculean drinking prowess, and after the other night of hanging with the esteemed Fabry, I officially announce that I am a bigger pussy than I thought, but hey, you are what you eat. Anyway, Glenn provided my collection with this illustration of teenaged Slaine in a very rare contemplative moment. And, no, the pole in his hand isn't his cock; it's the handle of his dread battle axe, "Brainbiter." 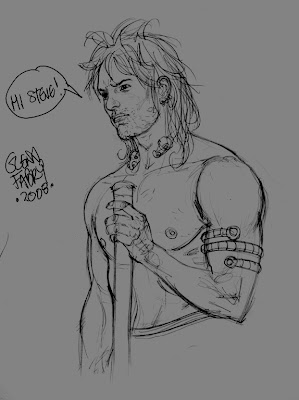 The young, pre-Simon Bisley Slaine.
But the new Holy Grail of my collection has to be this jaw-droppingly stunning portrait of the New Frontier version of Wonder Woman, drawn by that series' writer/artist, the uber-talented Darwyn Cooke. 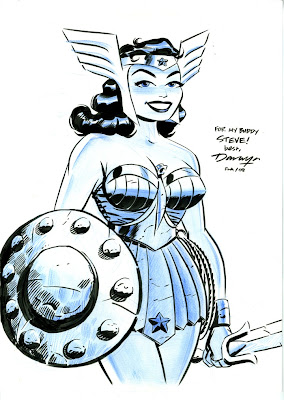 This scan does not even begin to do justice to this piece, a solid bit of pen-and-ink work over blue pencil highlights that measures slightly larger than the standard 11x17 dimensions of the standard comics page board. Seriously, click on the image and judge for yourself! And what totally blows me away, other than being my very favorite depiction of the warrior Diana — looking like she stepped out of my illicit fantasies involving Nigella Lawson — , is that this gorgeous peice was a gift engineered by my nearly-lifelong pal Amanda Conner. While I met Darwyn years ago during the start of his time on Catwoman and we hit it off thanks to similarly filthy senses of humor and a love of movies, I didn't get to know him as well as I would have liked. But Amanda knows Darwyn well and asked him if he'd do a drawing of his Wonder Woman for a friend of hers. Darwyn kindly obliged and would have turned out a great piece anyway, but when he found it was for Yer Bunche he threw some extra love into the drawing, and upon seeing it on Friday afternoon I stopped breathing for a moment and got chills of sheer joy. I love this drawing so much that if Darwyn were gay I would willingly go homo for him and spend my days wandering around in a crotchless Green Lantern outfit. And I mean that shit! Thank you, Darwyn. Thank you from the bottom of my warped and tequila-soaked heart.

Yeah, sometimes the near-monastic lifestyle of the full-fledged geek is rewarded by the kami no manga (Japanese for "gods of comics"). Now if only they'd hook me up with a fetching and randy geekess...
Posted by Bunche (pop culture ronin) at Monday, April 21, 2008

I love this drawing so much that if Darwyn were gay I would willingly go homo for him and spend my days wandering around in a crotchless Green Lantern outfit. And I mean that shit! Thank you, Darwyn. Thank you from the bottom of my warped and tequila-soaked heart.

I am filled with envy over that print. Ah well, I'll have to make do by framing that "Power of the DC Universe" Hughes print.

God damn, is that thing a work of art!

STEVE KNOWS HOW TO HAVE A FUCKIN' GOOD TIME!! THOSE PICS ARE STANTASTIC! WHAT IS MORE SPECTACULAR....DRUNK WITH GLEN OR AN AWESOME PIC BY DARWYN??
WISH WE WOULDA HUNG TOGETHER AT THE SHOW....BUT I WAS TOO BUSY INTERVIEWIN' PEEPS AND BEIN' AN ASS.
GREAT PICS, STEVE!