ANOTHER REASON TO BRING LUNCH TO WORK

It should come as a surprise to absolutely no one who lives or works in Manhattan that the cost of buying lunch on a daily basic can be exorbitant, thus precipitating many folks brown-bagging it. I usually cook stuff that I can bring in but every now and then I'm tempted to try something new, in spite of the pointlessly high prices here in Midtown. My day job is located near Grand Central Station and there are numerous places where one can find pretty much any kind of grub to suit their fancy, and my co-workers take it upon themselves to check out nearly every new place that opens up. One recent sitdown/takeout joint that won high kudos from my fellow employees at the design 'ho house is Five Guys, a hamburger joint on 3rd Avenue that makes burgers and fries that were reputed to be on par with getting one's dick sucked — well — by an in-her-prime Jenny Agutter while she looks up from her kindly-provided task and gazes at you adoringly. 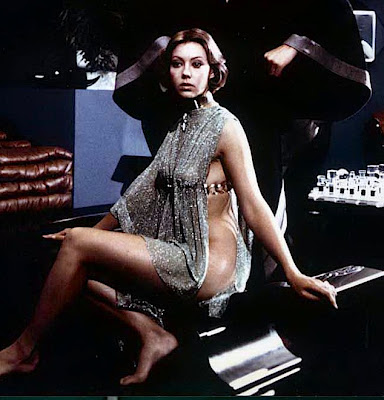 Needless to say, I very much doubted if any burger could live up to that kind of hyperbole, but I resolved to eventually judge for myself. That day came this afternoon, when I couldn't make up my mind as to what I wanted to have for lunch (I forgot my packed lunch at home) and wandered about the area in search of sustenance. Failing to find anything that looked good at the local Hale & Hearty soup place I looked across the street and spied Five Guys, deciding on the spot to experience their allegedly transcendent burger (no fries; too greasy and heavy).

I walked into the joint, passing a large crowd of yuppie-types as I made my way to the counter, and took a look at the menu. I decided on a plain bacon cheeseburger — just the beef, bacon and cheese, no condiments — so I could taste the sandwich and judge it by its own unadorned merits, but balked when I saw that the burger I wanted, even as relatively no-frills as I desired, was priced at $8.49, or rather $9.25 when tax was included. I mulled it over and finally decided to take the risk, plunking down my hard-earned cash before the cashier. In no time flat I received my burger in a plain paper sack, after which I made it back to my desk and commenced with the eating. 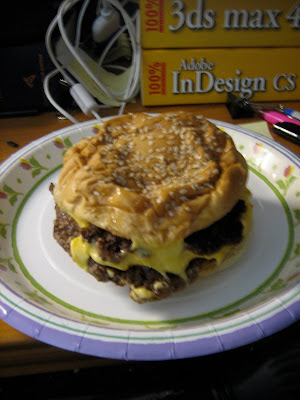 The Five Guys bacon cheeseburger, yours for a mere $9.25.
As I bit into the burger and masticated upon its artery-clogging goodness, I enjoyed its flavor to a certain extent, but the overall experience amounted to what could fairly be compared to the same item as found at any Wendy's location, only about 85% less greasy. While that's all well and good, the Wendy's version is less than half the cost of the much-vaunted Five Guys version, and the burger I had was in no way whatsoever worth paying nearly ten bucks for. 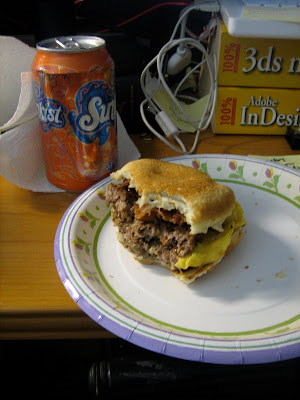 The Five Guys bacon cheeseburger, half-eaten and positioned next to a soda can for scale. This was not worth nearly ten bucks.

Considering that I was full after eating a little over half of the thing, coupled with a sense of disappointment and a profound feeling of having been ripped off, I didn't bother finishing my nearly-ten-buck burger, disinterestedly relegating what remained of it to the trash. 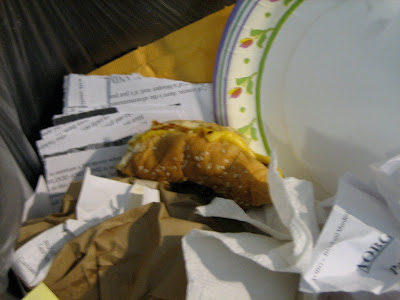 How about Jenny Agutter sucking your dick while eating a burger?

y'know... I love five guys. But i am amazed that the one in midtown is that expensive! They are usually around the $5-6 range. nearly ten bucks is ridiculous .

Also, if you were full after half that burger, you can get one that only has one patty on it instead of two. This is also cheaper.

But, yeah. I cant get enough of the cheeseburger with BBQ sauce, lettuce, tomato and pickles. NOM. Sorry you didn't enjoy it.

Hmmmmm a Five Guys just opened to much ballyhoo in Westport, and I have already been there twice.

It's not quite as expensive as the New York model, but then I purchased the non Bacon version.

I have loved the taste of their burgers since I trekked up to Newtown (a good 15 miles from where I live) to try it on a relative's reccomendation. I wasnt disappointed and was very happy when I read of a new shop opening in the town next to mine. Since it has opened, it has done boffo business too. There is always a line.

Sorry your experience with the chain wasnt as fulfilling.

The best burgers I ever ate in a restaurant were had at Paul's Palace on 2nd Avenue in Manhattan. A wide variety of toppings (including the blessed bleu cheese), decent egg creams (a dying NYC art form) and crispy steak fires add up to the ne plus ultra of burger-dining experiences.

Paul's was very good. Is it still there?

Paul's palace is still there (thanks the gods), doing brisk business and maintaining the same high standards as during the Nineties. I go there every six months or so and the last time I went it was just as excellent as always.

Paul's Place is great, mainly because the owner used to be the cook at Jackson Hole on 3rd Ave and 35th St. Almost identical burgers and both are great. 5 Guys in Pittsburgh is about 2/3 the price of the Manhattan location. The burgers are good, but only in an old time beach front burger stand kinda way.

5 Guys is overpriced, but the best burger and fries of any chain I've tried. Like my love of KFC - basically a once-or-twice a year slurge. Splitting an order of fries with a glutton-partner-in-crime is a worthy adventure.

5 Guys is real good - the nearest one to me is in Swampscott but your burger there is like $5.50. I can't see it being worth NYC prices. We mainly do Sonic, they have a Peabody store which I think is the only one east of the Hudson.

For me NYC food will pretty much always come down to pizza or deli. Or random halal carts.

My mom's been to the Westport 5 Guys about 4 times so far since it opened, which is quite something since she just lost a week to lung surgery. Shows you how important a good burger can be.

Being fortunate enough to live in the general area where Five Guys got started, I sorrow for your crap 5G experience. Their fries are worth the price of admission and if hot dogs are on the menu I head for those rather than for their overcooked burgers (in my world anything over rare is overcooked). Try the dogs and fries next time and I can practically guarantee you'll change your mind.