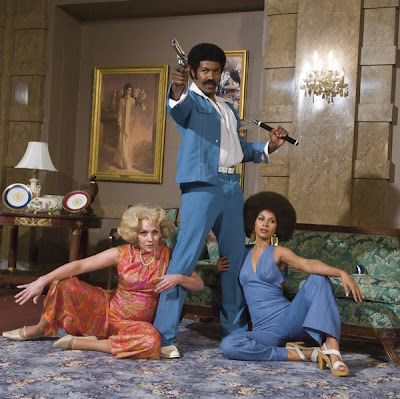 BLACK DYNAMITE, the letter-perfect sendup of the blaxploitation genre and funniest movie of 2009, is out on DVD on Tuesday (or right now, if you live in NYC and shop at a certain Lower East Side video store beloved for its "fuck street dates" attitude). I watched it on Saturday night and it absolutely holds up for repeat viewings. The transfer looks great (its intentionally crappy film stock brings me back to the days of VHS tapes of already worn low budget flicks) and the extras are quite good. There's a commentary track featuring the director, the co-writer (the guy who plays Bullhorn, a dead-on tribute to Rudy Ray Moore as Dolemite) and star Michael Jai White, alternate and deleted scenes (skip this section; the stuff was left out for a reason), an informative "making of" documentary entitled "Lighting the Fuse," and a very entertaining panel discussion from the San Diego Comicon with the same dudes who did the commentary, along with the female lead. That last segment in particular is loads of fun for its insight into where the filmmakers got their inspiration and their astute observations about the blaxploitaton genre in general, such as:
So the blaxploitation genre's answer to YOUNG FRANKENSTEIN makes for a terrific addition to your DVD shelf. Take my word for it and get your hands on it immediately, you born insecure, rat soup-eatin' muthafukka!
Posted by Bunche (pop culture ronin) at Monday, February 08, 2010

I watched this the other night thanks to you recommending it. The scene with the boom mike almost made me piss myself.

Looking forward to it. The film played for a week here in Seattle, and I missed it then.

The "97% filler" observation is true of just about every exploitation/ psychotronic/ grindhouse film I've ever seen. It's what makes exceptions like The Re-Animator, Living Dead Girl, Dawn of the Dead, Street Trash, Gator Bait, Shogun Assassin, Dead/ Alive, Sorceress and so forth - movies that really are as batshit insane as their posters suggest - so damn much fun!

I loved this one.
"quiet, you'll wake up the rest of the bitches"

I'll definitely get the DVD.

Thanks for the heads up, man.