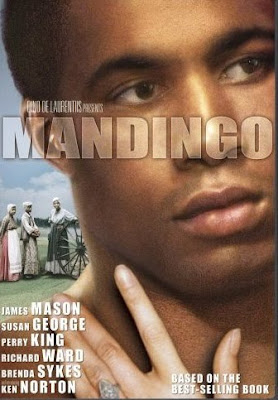 The DVD cover for MANDINGO.
I hadn't previously mentioned him on The vault, but I have an eighteen-year-old friend named Olliver who has a keen interest in getting into the comics biz as a writer, and during our discussions of the logistics on the biz we became pals. He keeps me abreast of what the young whippersnappers are up to and into, while I pass on my knowledge of pop culture minutia to another interested generation, so it's a mutually beneficial relationship (plus he's a thinker). Anyway, while chatting on the phone the other night, we were discussing assorted sleazy movies and, since it's Black History Month, I asked him if he'd ever seen MANDINGO. He started to laugh because he thought I was referring to the huge-dicked porn star who goes by "ManDingo," but I clarified what I meant by filling him in on the infamous 1975 plantation sleaze-epic. After about fifteen minutes of me raving about how his education as a sleaze film student was in no way complete until he'd seen it, Olliver was convinced and decided to track MANDINGO down at a local video store. I received the following email from him on Friday morning (he'd sent it the previous evening), and talk about a way to start the weekend:

Today I searched for MANDINGO at a local (Indian) mom and pop video store that specializes in B-movies and the guy working there is my one of my best friend's cousins, who is my age, so I figured he could help me find it. I asked him and he told me that they don't sell porn. Then I said the 1970's movie of the same name. He looked for it and couldn't find it. So he goes up and gets his mom and I hear her screaming at him. They both come downstairs and look at me. She says, "You want MANDINGO?" and I nodded "yes." She then looked at me in shock and asked, "Do you know what it is?" I nodded again. She sighed "Okay, this way." We went downstairs to this little room I'd never been in before and it's all these snuff films and stuff. She grabs a case on the shelf and hands it to me. It just says on it "DO NOT WATCH!!! NOT SAFE FOR THE WEAK!!! RATED: X" She asked me five times if I was positive that I wanted it. So I asked my friend's cousin "It's not that bad right?" He looked at me in shock and said "I don't know. I'm not allowed to watch it!" So now I have a $4 dollar copy of MANDINGO. Man, they gave me some weird looks while I was paying. I plan on watching it tonight.

Now I don't know what you readers think. but I'm wondering exactly what it was that Olliver got his hands on. MANDINGO, indisputably vile and offensive though it may be, was rated R in the first place and still retains that rating on DVD, so what was up with the renter? I can't wait to hear back from Olliver about this!
Posted by Bunche (pop culture ronin) at Saturday, February 06, 2010