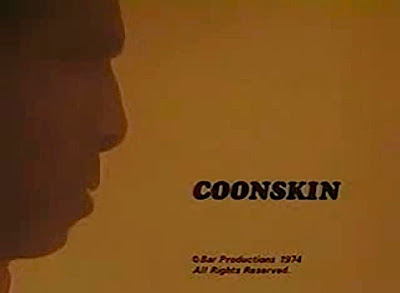 Also known as STREET FIGHT, this live action/animation hybrid from Ralph Bakshi is the director's most interesting film in the wake of his previous effort, HEAVY TRAFFIC (1973).

Released in 1975 and landing near the tail end of the blaxploitation craze, COONSKIN is pretty much SONG OF THE SOUTH as filtered through a scabrous post-Civil Rights era satirical sensibility. The film's live action framing device involves Barry White (yes, that Barry White) and Charles Gordone burning rubber to reach a prison where their friend (Philip Michael Thomas, billed here without the "Michael") awaits pickup at an appointed time after making a jailbreak. While nervously waiting for his pals to arrive, the escapee is entertained with stories told by an old inmate (Scatman Crothers) who helped him break out, tales that modernize Joel Chandler Harris' familiar anthropomorphized down-home critters into the "badass nigger" types common to American black folklore and blaxploitation movies. 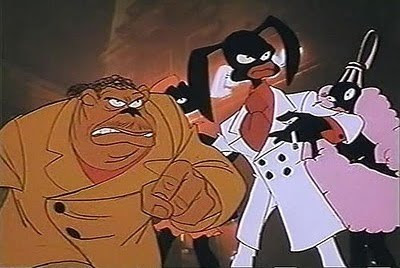 Brother Rabbit (Thomas), Brother Bear (White) and Preacher Fox (Gordone) leave their Southern home and make their way to Harlem, where they encounter a false prophet, "Simple Savior," who claims kinship to the Black Jesus and empowers his followers to kill whites and (allegedly) get away with it, all while making a hefty profit for himself. Brother Rabbit calls bullshit on the prophet's schemes, thus launching a conflict that allows him to show off his legendary "trickster" attributes and take over the preacher's power base after killing him. That power grab swiftly escalates into Brother Rabbit becoming a considerable power in Harlem's underworld and puts him directly in the sights of the local Mafia godfather and his gaggle of homicidal and homosexual sons, each of whom holds a vested interest in assassinating Brother Rabbit in order to please their pop. Our heroes must terminally deal with the godfather, his heavily-armed soldiers and the corrupt cop he controls, as well as the evil, taunting personification of the American Dream — the blonde and buxom Miss America — who forever mocks and denies the black man, and by the time the film reaches its conclusion there are bloodied corpses all over the place and little sense of triumph to be had.

Wildly experimental and delving into territory not dissimilar to that found in HEAVY TRAFFIC, COONSKIN's anti-SONG OF THE SOUTH leanings lend it great power and interest, attacking numerous targets and uniting all of its grubby players under a blanket of stereotype that leaves no group unscathed. Misunderstood during its initial release by many detractors in the black community (most of whom protested it before seeing it), COONSKIN's heavy use of blackface caricatures can now be accepted as the confrontational artistic element that it was so clearly intended to be, and the film is strongly recommended for those who can handle satire with extremely sharp teeth. HIGHLY RECOMMENDED.
Posted by Bunche (pop culture ronin) at Friday, February 05, 2010

Holy shit!!! I never even heard of this! Thank you!!

Now out on legit DVD and remastered! Xenon is the company - demand it from your local retailer!!