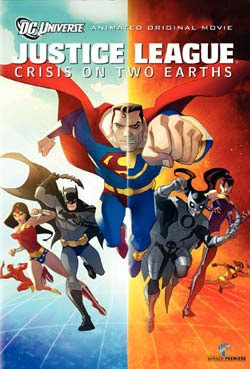 If you love the stuff that Warner Brothers has been doing with the animated DC Universe, I suggest you get off your ass and get your hands on a copy of JUSTICE LEAGUE: CRISIS ON TWO EARTHS immediately. I can't really go into the minutia of the plot without giving away a lot of the fun, but let it suffice to say that it takes the oft-used trope of parallel worlds and gives us an intelligent wall-to-wall slugfest fueled by the following basic plot: the Justice League gets called on by the good-guy Lex Luthor of an alternate universe to help him put an end to the reign of their evil doppelgangers, the Crime Syndicate, a pack of super-sociopaths who operate like the metahuman answer to Tony Soprano and his colleagues. But much as is the case in the Justice League's own reality, the Crime Syndicate has a brain on par with Batman in their ranks, and that brilliant mind is Owlman, who is voiced to 100% believably-perfect and cold malice by James Woods. 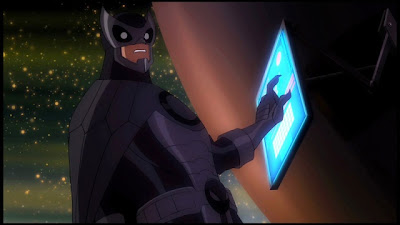 Owlman (James Woods) in the midst of doing something very, very, VERY bad.

But, unlike our Batman, Owlman is calmly and terrifyingly insane. Yeah, our Batman is not exactly what anyone would call the model of sanity, but Owlman is really and truly bugfuck crazy insane, and he has an agenda up his sleeve that's simply the worst thing ever conceived by man.

That's all I can really say without giving away some truly kickass surprises (Dwayne McDuffie's script is a DCU-fan's wet dream), but here are some relatively spoiler-free observations: 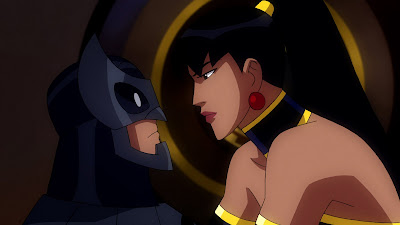 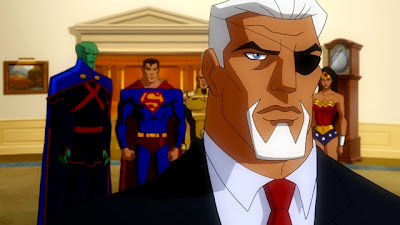 Hail to the Chief? President Slade Wilson (Bruce "Willard" Davison). Yes, you read that right. Fucking Deathstroke's the Commander-in-Chief!!! (NOTE: no explanation whatsoever is given as to who Slade is, so if you're in the know, it's a great touch.) 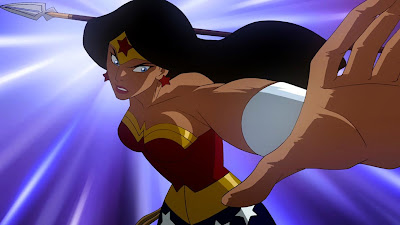 My girl Diana, laying down some Greek mythology-style ass-whuppins.
The extras are rather sparse; there's no commentary, but there are two episodes of the JUSTICE LEAGUE TV series featuring the alternate reality where our heroes impose a fascist rule, and a boring and rather self-congratulatory piece where various DC writers and editors pat themselves on the back for all the post-9/11 CRISIS stories (most of which sucked, especially the odious and offensive IDENTITY CRISIS). But there is one bit of bonus content sure to be of interest to comics fans, namely the first "DC Showcase" short, an item bringing The Spectre to animated life (?) for the first time that I can recall. 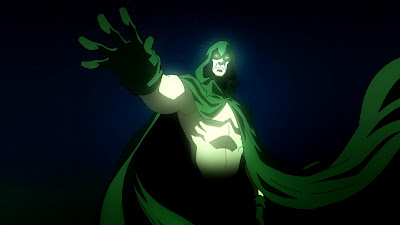 The Spectre makes his animated debut. To crib a line from my man Kenshiro, "You are already dead."

Voiced by Gary Cole, The Spectre does his vengeance/personified-wrath-of-God thing in a style designed to be reminiscent of films from the character's Seventies-era Michael Fleischer-scripted/Jim Aparo-drawn run. But even though it's now nearly forty years since those amusingly gruesome stories appeared in ADVENTURE COMICS, The Spectre's signature vicious and appropriate takedowns of his deserving victims have been rendered far more tame than Fleischer's excesses, and as a result the end result is atmospheric but ultimately toothless. Still worth a look, though.

So out of the DC direct-to-DVD movies, I rate JUSTICE LEAGUE: CRISIS ON TWO EARTHS as on par with the equally terrific GREEN LANTERN: FIRST FLIGHT and WONDER WOMAN. Very highly recommended, so all I have to say to the folks coming up with stuff is...MORE!!! And give us a Kamandi feature! Oh, yeah, and OMAC!
Posted by Bunche (pop culture ronin) at Friday, February 26, 2010

It has one of my new favorite Batman lines of all time. It's the one during the fight with Owlman about looking into the abyss. How freakin' cool.

Love your blog, by the way.

My 8 year old cousin watched that Teen Titans cartoon when it used to be on and got the whole Slade Wilson thing because Deathstroke was pretty much their main enemy even though they never really refered to him as such. So I think most kids will get it

I was lukewarm about the story and voice acting (except for Woods as Owlman, which was awesome), but the art and animation was just about the best I've seen on an animated superhero feature. The fight scenes were so wonderful I didn't want them to end - my favorites being the dueling Flashes and Green Lanterns.

I thought it a little curious as to some of their hero choices (old school Aquaman and Hal Jordan, but neuvo Firestorm and Red Tornado).