When O.J. Simpson fled the law in the wake of the discovery of the savagely murdered corpses of his wife and her friend in 1994, America's collective mind was blown when faced with one of a generation's most beloved sports heroes possibly being the killer. When news of the incident reached the Marvel Bullpen, many of us recalled an ad that ran comics just shy of twenty years earlier, back when O.J. Simpson shilled for Dingo boots, so a number of us flew to the Marvel archives room to find a comic that featured the advertisement so we could take copies of it and alter them to reflect the current state of O.J.'s affairs. The first of the two that I did was done with no thought put into it, other than to add as much blood to the images as possible: 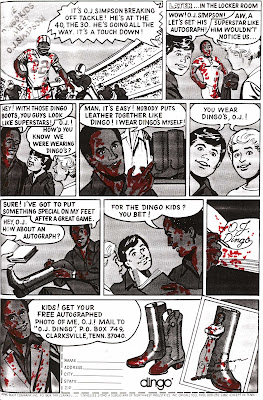 The second version, however, displays my raised-on-NATIONAL-LAMPOON sensibilities, and I'm not exactly sure that's a good thing: 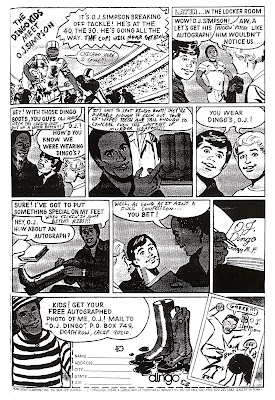 Yeah, I know, I know. It's horrible and wrong and all that, but I will never apologize for the first panel's depiction of a bloody O.J. winning the game with a severed head in place of the requisite football.
Posted by Bunche (pop culture ronin) at Thursday, February 25, 2010

But why would he sign his name O.J. Dingo? He really was crazy.

The first one would fit in on the walls of the Whitney Biennial.