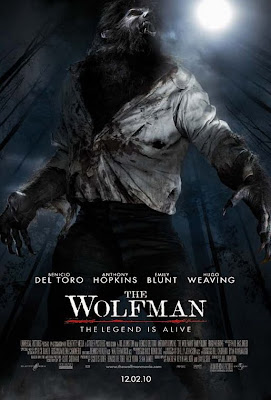 My pal Mindless Kirby saw the remake of THE WOLF MAN at two preview screenings and kindly sent in the following review. I've got the day off tomorrow so I can see it (and PERCY JACKSON AND THE OLYMPIANS: THE LIGHTNING THIEF) without the usual nighttime throng of obnoxious moviegoers at my theater of choice, so I'll be back with my own review soon. Anyway, here's Mindless Kirby's two cents.

THE WOLF MAN remake proves that Universal Studios back in the classic era is, and has always been, the best at making monster movies. If you like monster movies you’re going to see this anyway, so don't even bother reading the following.

Overall there is a lot that I liked about the movie, as well as some stuff that I hated about it. The movie starts out amazing, then kind of fizzles out around the second transformation 3/4 into the movie. It will just break your heart like that little girl in first grade that calls you a stupid head (come on, you know you were hurt by that.)

"What about the Wolf Man itself?" That's what everyone wants to know. Personally, I would have preferred a snout on my werewolf, but I understand that they wanted that classic old school feel, so I dig. But to be honest...the Wolf Man, in monster form, sucks.

The werewolf scenes feel tacked on and very half-assed, even after we have to sit through at least five explanations of what werewolves are. I feel weird saying that I liked the story leading up to the Wolf Man himself over the action scenes because it was very compelling acting; it feels weird to say that because I'm the kind of guy who will go into a movie just to watch the interesting ways in which the filmmakers have people brutally murdered. This movie was the first time I have ever seen a film where I did not care about the werewolf as a monster, but was more interested in the actual backstory.

The movie features Benicio Del Toro at his best. He reminds me of that guy in AN AMERICAN WEREWOLF IN LONDON if you made him go through several years of alcoholism and slapped him in the face with a shovel. Del Toro already looks like a dog and he uses it to his advantage. The costumes and sets looked great and made it a lot easier to get sucked into the movie. The Wolf Man, though, looks terrible and the Anthony Hopkins old werewolf looks even worse. The computer effects are lame, and the decision to rely on CGI was a bad one. I would have loved to see how the special effects masters can improve on making the most realistic transformation ever, using today’s technology on the prosthetics and mechanical effects. The computer visuals for the Wolf Man's transformations are very sub-par and even though they would be exceptional for a video game, they’re pathetic for a movie with such a high budget.

The film’s werewolf scenes were just plain embarrassing. The Wolf Man runs like the upright simians from Tim Burton's PLANET OF THE APES remake. His nails barely scrape the ground and the backgrounds go by as if they were a rear projection seen in a car on the set of an old Hollywood movie where the background would be a screen that has the same tree and building go buy four times. Half the scenes were blurry CGI or a costume so fake you could have seen the zipper. I've seen Halloween costumes with more detail. I feel it would have been more enjoyable if the movie had been about Del Toro's character struggling with alcoholism or mental illness.

As I said before, Del Toro really made the movie. The worst actor in it was without a doubt Anthony Hopkins. All his scenes could have been taken out of the movie and it wouldn't have suffered at all. Don't even get me started with his sister in-law; she is just a tease throughout the entire film. They keep telling her through the whole damned movie "the only way to cure a werewolf is love" at least 20 times. So you’re just waiting, asking “what is she gonna do? kiss him? Hold his hand? Ask him to the prom?” DO SOMETHING, DAMMIT!!!

I'm not gonna give away the ending, (frankly because I don't want to have an aneurysm) but it's disappointing. Anthony Hopkins and Del Toro have a fight worthy of SPIDER-MAN 3; wolf men die, crappy sequel is set up. Boo hoo hoo. Sharp-eyed viewers will notice several references to the original movie as well as references to FRANKENSTEIN and DRACULA. I believe a FRANKENSTEIN movie is what’s next in Universal's pipeline.

In closing, the odds:

Good review, that Mindless Kirby must be a really cool dude to do that review for you

Fortunately, I left my surprised face at home.