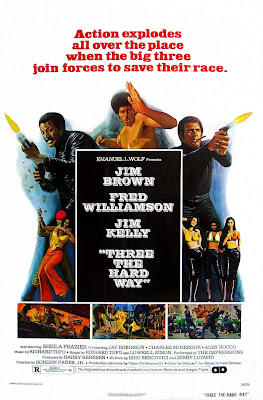 Poster for the 1974 theatrical release.

There are some ideas that sound like a "can't miss'" when pitched for possible greenlighting, but sometimes the finished product just ain't all that. A case in point is THREE THE HARD WAY, a film that by all rights should have been completely fucking kickass by virtue of its star power. Starring Jim Brown, Fred Williamson and Jim Kelly, the movie has more action hero moxie, pure melanin-infused testosterone and sheer badassery than any film should have a right to, and the only way this cast could have been any more balls-out righteous is if they rounded out the trio to a quartet by adding Richard Roundtree (I would have said Bruce Lee, but he was dead and Jim Kelly stands for the chopsocky element). I first got wind of THREE THE HARD WAY when a friend told me about it during the mid-1980's, and he raved about its excellence. I didn't get to see it for myself until sometime in the early 1990's, during my "lost years," so, much like the previously-discussed TROUBLE MAN, I only remembered small bits of it until watching it again recently. Lemme tell ya, bunky, if ever there were an overrated blaxplotation film, this is it. DOLEMITE (1975) is also vastly overrated, but THREE THE HARD WAY is a worse disappointment because it was professionally made (although at times it resembles a made-for-TV movie) and had so much potential.

The plot comes off more like a comic book than many other films in the genre, and that's really saying something: Wealthy record producer Jimmy Lait (Brown) finds himself pulled into a web of intrigue when an old friend turns up wounded and dying after escaping from a secret medical experimentation facility. While delirious in the hospital, the wounded man tells Jimmy that someone is out to kill "all of us" and that they've got the means out to do it. That doesn't give Jimmy much to go on, so he leaves to supervise a recording session with Curtis Mayfield's former group, The Impressions (who provide the by-the-numbers soundtrack), leaving his girlfriend (Sheila Frazier) to look after his pal. Suddenly and unexpectedly, a telephone company cherry picker shows up outside the injured man's window and an assassin steps in to kill him in cold blood before he's well enough to tell anyone what's going on. 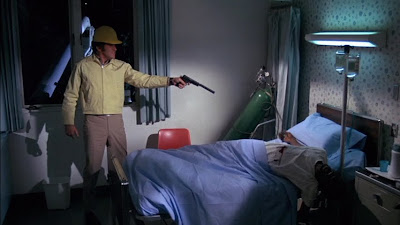 The first of the film's legion of corpses.


Unfortunately for her, Jimmy's girlfriend walks in just as the assassin strikes, so she ends up kidnapped. Upon discovering her abduction, Jimmy embarks on a quest to find her, but his every step is dogged by mysterious assailants bent on making him take the forced dirt nap. Jimmy quickly realizes that this shit is more than one man can handle, so he enlists the aid of two old friends and fellow total badasses, super-suave entrepreneur Jagger Daniels (Williamson) and "my Afro has its own gravitational field" martial arts master Mister Keyes (ENTER THE DRAGON's Jim Kelly) — a character named "Mister" by his mother, so people would give him respect — and the three dive into a violent world of mayhem featuring immense amounts of rampant gunplay, fist fights, martial arts and vehicles that explode for no reason. They soon discover that they're up against Monore Feather (Jay Robinson, best known to those in my generation for his Saturday morning villainy as DR. SHRINKER), the leader of an underground white supremacist organization whose chief scientist has developed a serum that kills only black people, and they intend to commit anti-Negro genocide ("Negrocide?") by infecting the water supplies of New York City, Chicago and Los Angeles. In a movie featuring Jim Brown, Jim Kelly and my man Fred Williamson, do think for even a second that those bruthas are gonna let that bullshit happen? You're fuckin'-A right if you answered "HELL NO!!!" and you'd better believe that by the time the end credits roll they'll be stacking up cracker corpses like cord wood. So what is it about THREE THE HARD WAY that leads me to label it a disappointment?

The film is certainly action-packed, but it's very unevenly paced and after a while its action sequences just seem to blend into one another with little to distinguish them and not much to hold the viewer's interest. There's a numbing sameness to the endless gun battles and Jim Kelly seems to be attempting to imitate Bruce Lee, which is totally unnecessary after more than holding his own opposite the electrifying Lee in ENTER THE DRAGON. 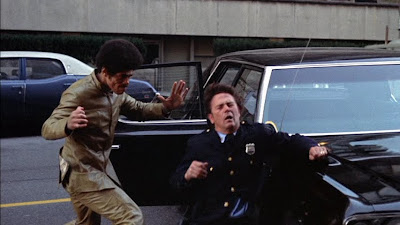 The whole thing came off to me like another example of "action figure cinema" that could have been written and directed by a ten-year-old (where did the guys get a literal arsenal of firearms and grenades, and where did they get their S.A.S.-level of proficiency with them?), and I think THREE THE HARD WAY's lofty status in the pantheon of "must see" blaxploitation flicks is due the teaming of three of the genre's biggest male stars in one vehicle and the fact that many of those who remember it so fondly may be nostalgic after not having seen it in decades. Now that I've seen it again, the only thing from the film that truly stands out in my head as inspired is the sequence in which our heroes have failed in their efforts to get information from a captive white supremacist, so Jagger calls in the services of three "specialist" friends, namely The Countess, The Empress and The Princess, a trio of multi-ethnic dominatrixes who arrive on color-coded Japanese racing bikes with matching uniforms.

The true THREE THE HARD WAY: (L-R) The Countess (Pamlea Serpe), The Empress (Irene Tsu) and The Princess (Marie O'Henry), three hardcore bitches you DO NOT want to cross.

These three women are all business, utterly scary and absolutely "hungry" to inflict serious harm to their captive, hopefully "all the way." Jagger shows them deferential respect and even strongly advises karate master Keyes to stay out of their way or he might not survive (You will totally believe it when he says it). The ladies go upstairs and upon seeing them the captive Nazi anticipates a foursome that would light up they sky. It's easy to understand how he could think that, especially when the ladies get topless and approach him. 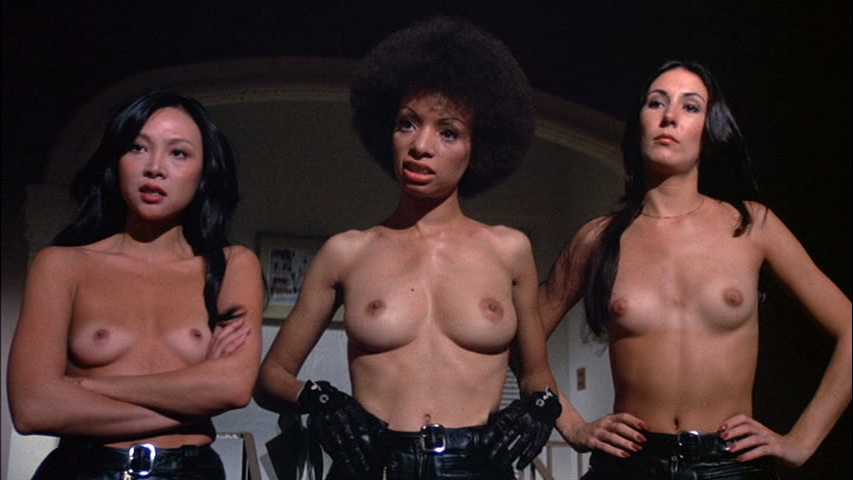 The thing that dreams are made of? Um...NO.

But the dream immediately turns into a nightmare as the ladies break out their "equipment bags" and commence to practice their trademark skills (which we unfortunately do not see, since this is not an Ilsa movie). Apparently Torquemada has nothing on these chicks, because when they call up our heroes and tell them the scumbag is ready to squeal, the heroes find the man curled up in a corner, shaking in the fetal position and jabbering like a madman. Once the heroes listen to what the guy has to say, the eager women return to continue with their fun, and upon seeing them approach him once more, the white supremacist lets out an anguished cry and promptly falls over dead from sheer terror. All of this made me want to see a movie devoted to the origins of The Countess, The Empress and The Princess. What made these engines of skillfully-applied man-hate? How does Jagger know these chicks? How many men have they permanently maimed or killed, and do they always work in concert? Alas, these and other questions will never be answered.

Anyway, THREE THE HARD WAY is worth sitting through for blaxploitation completists, but it is in no way the flick it's been hyped-up to be, fascinating dominatrixes notwithstanding. It's a fun time-waster, and that's all.
Posted by Bunche (pop culture ronin) at Wednesday, February 10, 2010

I saw this on local TV back in the 70s when I was a kid. The 3 women really stuck in my mind but of course they cut out the nudity thanks for the still. Also that local TV station WWOR channel 9 here in NY (also NJ)was really great in showing more contemporary B and C grade movies I guess they got a great deal.

I loved this film for the total absurdity of it! I still watch it every time it's on. Jay Robinson, btw, was the awesomely vile Caligula in both The Robe and Demetrius and the Gladiators. Looking forward to your review of Willie Dynamite. :-)

And now I'm wondering if this movie influenced the creation of The Baroness...