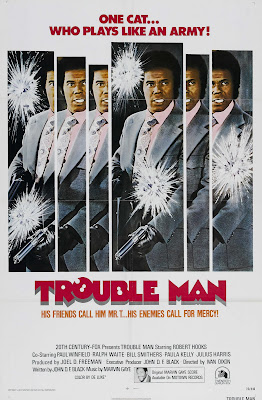 Poster from the original 1972 theatrical release.
A long time ago, during the early days of my studies in questionable cinema, I encountered the 1978 book THE FIFTY WORST FILMS OF ALL TIME (AND HOW THEY GOT THAT WAY) by Harry and Michael Medved and was intrigued by its contents. While the majority of the films covered were indeed of extremely wretched merit, a handful of the films included in no way deserved to be found within its pages — most notably the terrific animated epic ALAKAZAM THE GREAT — and among the few films undeserving of being in the dubious Top 50 can be found TROUBLE MAN. After having read what the Medveds wrote about TROUBLE MAN and other films from the blaxploitation genre in subsequent works — particularly their piece on SCREAM, BLACULA, SCREAM from THE GOLDEN TURKEY AWARDS, in which they award it "Worst Blaxploitation Film of All Time" thanks to the audience they saw it with, rather than the film's overall worthlessness; BLACKENSTEIN was among the nominees and anyone who's seen it will tell you it's one of the worst films ever made, regardless of genre — I believe it's fair to say that the writers simply had a bias against blaxploitation films in general, presumably because of the lurid and often vulgar content, so they largely got unfairly lumped into one steamy pile of celluloid shit in the eyes of the Medveds and were consequently slagged off. The younger Medved eventually dropped out of sight, but Michael remained in the public eye as both a movie critic and political commentator whose views are rather conservative (to say the least), so his animosity toward flicks like TROUBLE MAN can hardly be considered surprising. But fuck Michael Medved, I'm here to talk about TROUBLE MAN!

I first saw TROUBLE MAN during my "lost" years, on a weekend night where my perceptions were clouded thanks to a case of all-day imbibing of forty-ounce Budweisers. (This was during the days, just shy of twenty years ago, when I would wake up on Saturday morning, blaze a few bonghits, and then pull a forty from the fridge, all before noon, and exclaim my familiar adage of "It's never too early...for a beer!" Thankfully, I've outgrown such stupidity.) When I saw the film, I was too bombed to actually process it and relegated it to the short list of films I saw in that state, fully intending to give it another viewing so I could actually discuss it from an informed point of view. Well I'm glad I finally watched it again, because TROUBLE MAN is one of the best examples of what a blaxploitation movie can be when it has a good script and a cast that has every right to be in front of the camera.

The narrative follows a few days in the life of Mr. T (Robert Hooks, and no, it's not that Mr. T), a super-smooth multi-tasker who's the neighborhood "fixer," meaning if you come to him and have the cash, he'll solve your problem, more often than not quasi-legally. He's a sharp dresser who leans toward $600 suits (in 1972 money, so adjust for inflation), refreshingly eschewing the traditional pimp suit/Negro leatherboy look common among blaxploitation heroes, and his fierce intelligence practically radiates off the screen. Operating from his base at the local pool hall, T is all business and expert at what he does, taking zero shit from cop or criminal, and always acting according to his own personal code of honor (again, provided he gets paid up front). Among his many skills (he holds several licenses and degrees) is his capacity as a private investigator, and that talent is hired by two low-level gangsters, Chalky (Paul Winfield) and Pete (Ralph Waite), who want T to figure out who's ripping off their floating craps games at gunpoint, but that task will prove difficult because the thieves are concealed from head to toe, sporting ski masks and gloves that betray no evidence of skin color. Demanding a fee of ten grand (which Chalky and Pete balk at but reluctantly agree to), T agrees to attend one of the carps games in hope of seeing the robbers for himself and hopefully garnering some clues, but what he doesn't anticipate is the crooks who hired him having an agenda of their own and setting him up take take the fall for a false murder rap. The flipside of this is that the crooks made an enormous error in judgment by fucking over T and in the process igniting a gang war between themselves and black crime lord Big (Julius Harris, aka Tee Hee in LIVE AND LET DIE), a huge, deadly mess that T has to clean up. Ever fearlessly cool and more clever than anyone else around him, T takes the fight to his would-be framers and in no uncertain terms makes them regret the day they were born.

Directed by Ivan Dixon (of HOGAN'S HEROES fame) and featuring an excellent score by Marvin Gaye, TROUBLE MAN is a very unusual entry in the genre due to its protagonist being a badass with a keen brain rather than just some profanity-spewing super-nigger with an assortment of firearms. About five minutes into the film, I became very interested in T. Who was this guy? Where did he come from? What circumstances forged this cool-as-ice brutha? In fact, next to Sean Connery in the first few James Bond films, I can think of no other cinematic hero prior to 1975 who exuded such raw, imposing Alpha wolf cool. When T enters the room, you can just sense that he's the toughest motherfucker in the place and you would be very wise not to cross him. He's a unique figure in the annals of blaxploitation films and I am genuinely sorry that no sequels were made.

Low on sex/nudity, but solidly delivering in every other way, and inexplicably underrated among the pantheon of the genre, TROUBLE MAN bears serious re-examination as the thinking man's blaxploitation movie, especially in the wake of its flagrantly erroneous inclusion in the Medveds' book. If you only ever check out five films of this genre, make sure one of them is TROUBLE MAN. 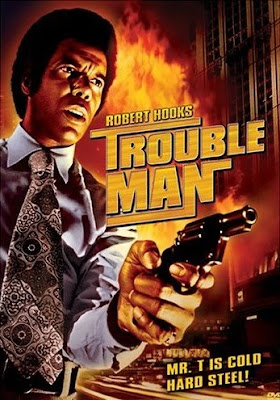 Robert Hooks was one of my TV favorite actors in the 70's. Try to find a copy of a movie called Crosscurrent. It's not officially on DVD but I found a bootleg online. You can get it from FlasbackDVD. I can't find the site link but the email is Flashbackdvd@earthlink.net

While I loved that book (largely because there was nothing else like it at the time), alot of the criticism was kind of mean-spirited. And as you mention, Michael Medved has proven to be an asshole over the years.