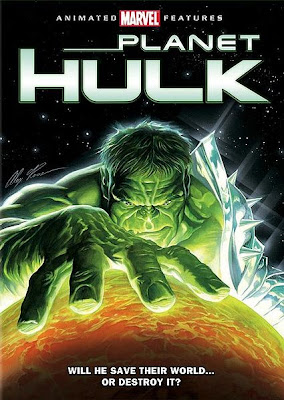 While I like The Incredible Hulk as a character, I've never been much of a fan of his long-running comics because there was a repetitive sameness to them when I was a kid. Issue by issue the formula went something like this:
Nearly every time I read a Hulk comic between 1973 and 1980, they all seemed to follow that scenario, sometimes with the most minor of variations — notably Harlan Ellison's heart-wrenching story featuring a smart Hulk and his discovery of Jarella, the love of his life — so I couldn't bring myself to read him on a monthly basis until John Byrne's beautifully-drawn run and Peter David's terrifically-written stint (which was aided and abetted by Dale Keown's fantastic visuals). After that I had zero interest in the green behemoth's adventures until one of my favorite comics-writers of all time, Bruce Jones (scribe of some of the best stuff ever to appear in CREEPY, EERIE and VAMPIRELLA, and that ain't hay), took the reins for a run that severely polarizes readers, and that run eventually led to writer Greg Pak's 2006-2007 epic arc, "Planet Hulk." That story was the first Hulk run in ages that got me interested in reading it on an issue-by-issue basis, catering to my long-held interest in warrior/barbarian yarns and gladiator epics, coupled with a sci-fi setting. Replete with aliens, brutal arena battles, monsters, Hulk bonding with a number of gladiators who share in his hardships, and a truly tragic ending, "Planet Hulk" is an epic well worth reading, so many of those who read it were stoked when an animated adaptation was announced, especially in the wake of the terrific (and ultra-violent) HULK VS.

The animated PLANET HULK reduces the richness and character development found in the comics version to its bare bones and consequently loses much of the story's heart. The Hulk's forcible banishment from the Earth by a number of Marvel's most prominent heroes and subsequent marooning on the planet Sakaar leads to him being pressed into gladiatorial slavery and allows Hulk to give full and fatal vent to his considerable rage, pitted as he is against an escalating cornucopia of violent and deadly opponents. During these battles, Hulk becomes "warbound" to several alien gladiators and becomes in inspiration to the planet's downtrodden, eventually overthrowing the planet's tyrannical asshole of a ruler and assuming the role of the world's savior. That's more or less what happens in the story, but there's a hell of a lot left out in the DVD version, including the inexplicable omission of Hulk's nameless female Brood comrade, the replacement of a captive Silver Surfer with Beta Ray Bill (apparently someone else currently holds the rights for use of the Surfer), and the total omission of the tragic epilogue that sets in motion the story's ultimate "Hulk smash" of a sequel, "World War Hulk." The animation and character designs are nothing to write home about either, and the production has a rather standard and somewhat uninspired visual feel about it. 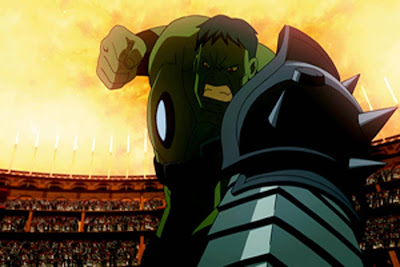 The Hulk pounds the motherfucking shit out of Beta Ray Bill in a sequence that will leave you feeling like you were on the receiving end of the beatdown in question.

But that's not to say that the DVD is a total loss; the voice acting is very good and the bit where Korg — one of the Stone-Men from Saturn — retells the story of how he and his brothers had the misfortune of attempting to conquer the Earth only to run into both Thor and Beta Ray Bill is a lot of fun, as is Hulk's bone-crunching fight with beta Ray Bill in the arena. The seeds of Hulk's romance with Caiera the Oldstrong are sort of there if you really look, and the whole thing moves at a brisk enough pace. Plus the fights are very, very violent for this sort of thing, so you may want to give it a look before you put it on for the wee ones. (I'd let my theoretical kids watch it, but I'm just giving you fair warning.)

I have no idea how PLANET HULK will fare with fans or with casual viewers, but its distillation of the meaty source material left me going "Meh" when all was said and done, and I kind of doubt that this will generate enough interest to warrant the production of an animated WORLD WAR HULK. I've certainly seen worse, but PLANET HULK is a mild disappointment that promises more than it delivers and utterly flattens any expectations built upon how fun HULK VS. was. This DVD is worth watching once, but it will be forgotten almost immediately after viewing. I just hope that the upcoming THOR: TALES OF ASGARD is better.
Posted by Bunche (pop culture ronin) at Thursday, February 18, 2010